Not many Americans are as familiar with Bernard Cornwell’s Sharpe series as we are say Hornblower or Patrick O’Brien’s seafaring fiction. A & E’s films series of C. S. Forester’s Hornblower series and the big screen release of Master and Commander: The Far Side of The World starring Russell Crowe have helped these stories find an audience, but the British made for television Sharpe movies have yet to find mass American appeal. Honestly I don’t know why. 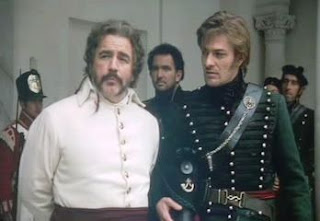 1993’s Sharpe’s Rifles starts the series in good fashion. Known for his mostly villainous roles in US productions, Sean Bean (Patriot Games, The Fellowship of the Ring) stars are Sergeant Richard Sharpe, a ruffian journeyman soldier in the midst of ’s war with Napoleon in . After saving the life of Arthur Wellesley (David Troughton)-soon to become Lord Wellington-Sharpe is promoted to Lieutenant and placed in charge of the 95th rifles’ Chosen Men. Sharpe struggles with the gentlemen above him who have bough their commissions while earning the respect of his sharpshooters-including Irish Rifleman Patrick Harper (Daragh O’Malley). Intelligence Major Hogan (Brian Cox) sends Sharpe and his men across in search of a missing banker carrying a badly needed gold draft for the English Army. Along the way, Sharpe must help Major Vivar (Simon Andreu) and Commandante Teresa Moreno (Assumpta Serna) and their Spanish guerillas inspire the oppressed Spanish people against the French.
It seems like a lot, yes, and considering Sharpe’s Rifles takes from several of Cornwell’s books, there’s much to set up, back story to explain, people to introduce. This first in the series sometimes falls into the pitfalls that come with introducing one to a series. Which is meant to be the story? Sharpe’s bonding with his men and Teresa or the mission? Each storyline presented is tied up all in good time. One need not continue with the series, but one need not see Rifles to appreciate the second film Sharpe’s Eagle. 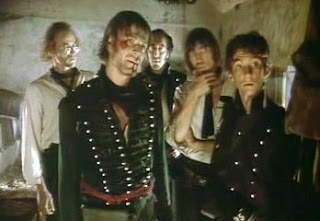 If the story or set up seems thin, then it is the characters that will keep you watching. We may hate him in if we know him at all (My husband calls Sean Bean a ‘glorified extra’!) but Sharpe made Bean a household name in the . The RADA trained actor can show Sharpe’s anger and doubt, as well as his sensitive side. Yet Bean looks the rough and tumble part. Natural to say that if you don’t like him, you won’t like Sharpe. Richard can be quite an arse from time to time, but he is a soldier of his time. Likewise we may not be used to the stereotypical Chosen Men, but all fit their parts. The educated Harris, The boy Perkins, and of course Harper-the Irish man serving in the English Army.
Not all for the boys, Assumpta Serna is perfectly cast as Teresa Moreno. The tough guerilla leader shows her soft side with Sharpe. It’s not an easy role-the ice queen type- but Serna looks the part of this intelligent noblewoman fighting with the consequences of her war torn country. 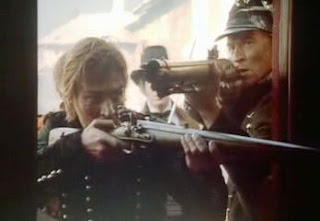 One miss for Sharpe’s Rifles is the score. The nineties electric guitar music is completely off for the time period onscreen, and the style has not stood the test of time. With such British-ness already about it, the ‘Over The Hills and Far Away’ song is perhaps also too English for us across the pond. A rousing classical score would have served the series better. The look of Rifle’s may also seem on the cheap now, but the uniforms, weaponry, and locales all carry the right authenticity to them. The scale for the first film here is small, dealing mostly with peripheral action during the war. Some of the fighting does, however, look ill chorographer and edited. In some sequences we see rifleman simply falling on the ground or Sharpe himself merely looking around in the smoke. There’s a lot of military violence, but little blood and gore. 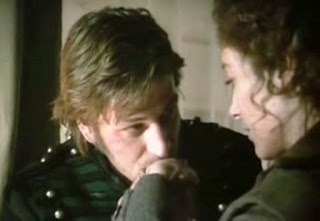 Spoiled younger audiences would probably skip Sharpe’s Rifles but the solid story from Cornwell adapted by Eoghan Harris is worth a gander. Female fans of Sean Bean will no doubt enjoy, but military fans looking for rough action or Napoleonic authenticity will also get hooked on Sharpe. Kids under 10 may not understand all the military politics or shy from the kissing scenes, but it could be fun to turn tweens onto the films and perhaps the Sharpe novels.
Sharpe’s Rifles is available individually on DVD or in several Sharpe sets. Unfortunately there are no features, and the digital transfer doesn’t look the best quality. Whether the gritty look is what the production was going for or if its simply weak technology, I don’t know, but the ills don’t infringe on the viewing. In fact, the negatives are all but forgotten once you get into the twist and turns, action, intrigue, and romance that seem to follow Sharpe. 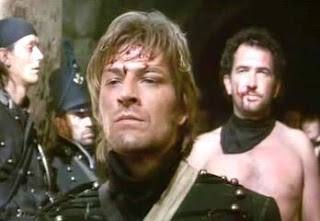 Is Sharpe’s Rifles the best film in the series? No, but as the introductory film, it doesn’t necessarily have to be. What you need to know is set for a British boys’ good time. Good enough even for us Americans to enjoy.
Normally, our book comparisons are also posted in the comments section below, but our Rifles analysis was so big, it has its own post here.
Posted by Kristin Battestella at 6:00 PM

Sean Bean is awesome. I haven't seen this, though I have heard of the series - dude looks so young in the screenshots! :D

Hi Anti. Thanks for stopping by.

Well, I guess SB was young in 1993. I am enjoying the series more as I move along. You should really check out the show, especially if you like Napoleonic or Hornblower stylings.