The Dark Good, But Nothing New

In recent years, this new chick flick styled horror has sprung up. The Grudge, The Ring, Darkness, and The Dark. This 2005 British production adds a few new twists to the genre, but doesn’t take the next step in standing out amid such similar films.

After separating from her artist husband James (Sean Bean), Adelle (Maria Bello) travels to with daughter Sarah (Sophie Stuckey) for a visit. Things have been tough between the ladies, but the Welsh countryside seems good for the reuniting family. The area is full of mysterious buildings, cult legends, and lovely beaches and cliffs. Unfortunately, Sarah vanishes on the beach. While James and local handyman Dafydd (Maurice Roeves) lead a massive search, Adelle discovers a strange girl named Ebril (Abigail Stone) now living in their home. 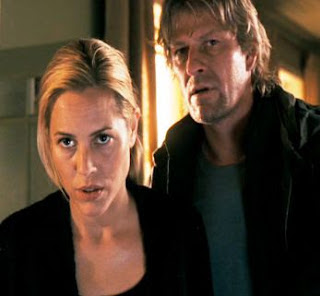 Okay, so the chick flick horror genre really began with Jamie Lee Curtis and Halloween, but this recent trend of chick horror always has the same key pieces: An American woman in a foreign country with a child somehow involved in said horror. The Dark brings a nice twist with its Welsh mythology, but there isn’t much time invested in this notion. Two scenes of the staple ‘talking to the old person who was there’ and the standard ‘lost journal/internet/microfilm’ montage set the intrigue but doesn’t take what makes The Dark unique far enough. 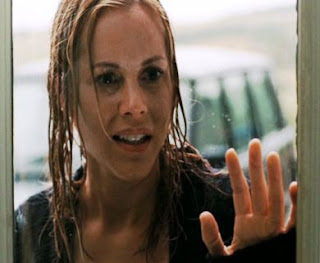 Maria Bello (A History of Violence, ER) is finely cast as the not so perfect mother on a quest to find her missing daughter. She’s the right style; a bit edgy, off her rocker, yet hip, blonde rocker chick. does fine, and it’s a strong role for what is odd to say an ‘older maternal’ part as compared to a teeny sexy chick part. The Dark, however, is not going to make Maria Bello a movie star anytime soon. Nothing ill against her, but everyone does the foreign low budget horror flick at some point. The Dark isn’t bad, just meh. Naomi Watts, Sarah Michelle Gellar, aren’t they all the same? 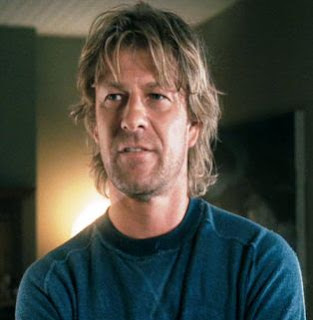 Likewise I am curious why Sean Bean (The Lord of the Rings) took two so similar parts within a year. Silent Hill and The Dark are very much the same vein, and Bean plays the searching, protective father in both. Odd that he has come down to independent horror features after such success with The Fellowship of the Ring. However, after seeing him in so many villainous roles, it is nice to see the softer side of Bean. (My husband kept suspecting he was someone involved in the evil!) Still, I can’t help but chuckle during his scenes with Sophie Stuckey and Abigail Stone. Do these little girls know who he is? Were they afraid of him? Don’t they say to never work with kids or dogs?

There is no question, however, about the lovely locations in The Dark. The stunningly beautiful yet violent and creepy cliffs and oceans onscreen add to the parental fear of the leads. My goodness how do British people really live so close to these cliffs without fearing their kids are going to plummet? This realistic filming adds to the creepiness of the abattoir. Based upon the novel Sheep by Simon Maginn, the animals are also a bit freaky; Herds of sheep surrounding folks, looking at people and baa-ing. The Dark shows promise with these foreign and weird touches, but it’s not enough. 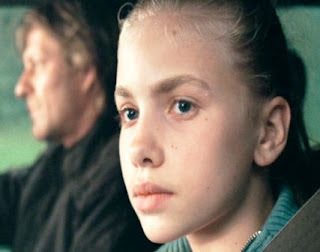 I suppose the biggest question is this: Is The Dark scary? First viewing; maybe. Bean and fans will tune in for sure, but those made to jump moments are now so commonplace that the spooks don’t work. Television Director John Fawcett’s (Xena, Queer as Folk, Taken) jagged abattoir flashbacks, cliff plummets, and otherworldly Annwn hell-like filming make great strides and look very cool, but don’t top what’s already been done onscreen.

Outside of a few f-bombs, I don’t see why The Dark is rated R. The child torture scenes are mild compared to other films, and the blood and gore isn’t heavy. Maybe European audiences prefer the parental struggles and life versus death debates, but us Americans want Blood! Gore! Sex! And we want it Now! 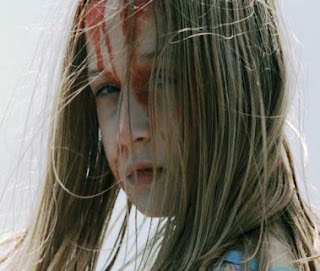 The Dark does nothing wrong, in fact its foreign and mature takes add to the film, not detract. The Dark is good. I’ve watched it several times, I’d watch it again, and I recommended The Dark to my horror loving husband. Too many similar films and not enough umph unfortunately give The Dark a feeling of déjà vu and familiarity instead of nail biting horror.

Although the dvd only offers one extra-an alternate ending that isn’t too shocking-if you’re looking for a bit of weird and creepy, The Dark is an affordable show without too much commitment.

Posted by Kristin Battestella at 10:05 PM

Hey gang. In addition to being over at The Mighty Bean, this review is also cross posted at Scars Horror Magazine