Highlander Season 2 Finds Its Legs
By Kristin Battestella
Spring boarding from the pluses of its debut season, Highlander: The Series opens its second season strongly.  Though struggling midseason with some of the same growing pains as Season 1; the 93-94 Season 2 handles character departures and the introduction of the Watchers in fine form- allowing Highlander: The Series to come into its own away from the film franchise. 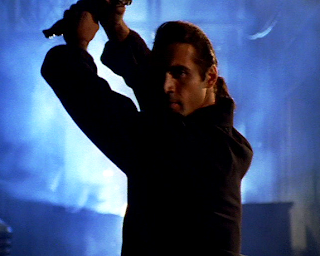 Immortal Highlander Duncan MacLeod (Adrian Paul) becomes increasingly suspicious of Joe Dawson (Jim Byrnes) and his Watchers- a secret organization who are pledged to observed immortals and never interfere.  Someone, however, is breaking the rules and killing immortals, making life more difficult for MacLeod after the loss of his mortal girlfriend Tessa (Alexandra Vandernoot). Richie (Stan Kirsch), now also immortal, has problems of his own learning how to fend off evil immortals after his head, and mortal dojo manager Charlie DeSalvo (Philip Akin) grows more and more curious about his new boss and Macleod’s secrets.
I don’t mean to be so spoilerly here, but Highlander: The Series hits the ground running in this sophomore season with critical departures and the establishment of its own mythos from here on out. The premiere episode ‘The Watchers’ introduces the critical organization and Season 2 stays strong thru ‘The Darkness’ and the exit of Tessa.  Unfortunately, midseason the show’s writers David Abramowitz and David Tynan flounder when Highlander: The Series once again returns to the action textbook crime of the week or immortal in the regular drama ho hum.  Issues about racism, sexism, injustice, and abused women are indeed handled very nicely thanks to MacLeod’s wise and chivalrous immortal angles. But again, these debates are on every other show then and now. Drastic character changes and internal fantasy mythology are enough for Highlander.  After such fine framework, Season 2 need not fall back on these stock scripts and filler episodes.  Smartly however, this season distances itself from the internal inconsistencies of the film franchise by dropping mentions of The Gathering.  The development of the Watchers, their deadly rogue faction the Hunters, and the wonderful observations and angst both provide pulls The Series away from the films once and for all.  Further examinations of mortals dying after having full lives versus immortals who are numb to life also establish great drama beyond the standard crime villainy. Grief, infertility, and child loss also add extra depth and dimension, again proving Highlander: The Series is at its best, nay superior, when it adheres to the quality of its own immortal design. 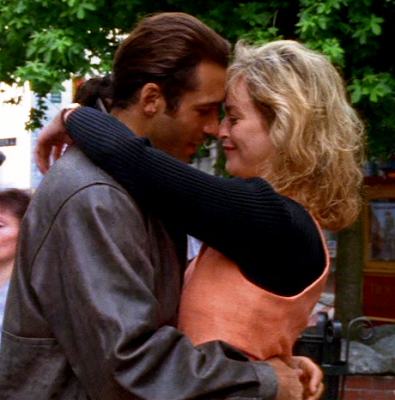 Yes, it is a little weird when MacLeod suddenly starts bagging some chicks so soon after Tessa’s exit, and there’s still a touch of those nineties hang ups with plenty of sweaty, shirtless dojo training montages.  However, it’s nice to see less Action Mac and more on the consequences of immortality.  He’s had plenty of time to develop his strict sense of honor and justice, but he also unhappily warns those around him that being his friend is deadly. Paul handles the kick ass, the somber, and the tears wonderfully. We think just as much of him when he cries as when he beheads the bad guy.  The loss of Tessa Noel is also very nicely done in character and performance.  Even though the leaving was largely Vandernoot’s decision, I don’t wonder if the exit of Mac’s steady girlfriend would not have happened in the future anyway. Obviously, there are so many more women and immortal bachelor angles to explore.  Sometimes, MacLeod may even seem to get over Tessa too quickly, but his new cynicism and pains of mortality make their presence well known during Season 2 and beyond.  Vandernoot’s exit and subsequent guest appearance in the two part finale ‘Counterfeit’ may even have the audience missing Tessa more, but her mortality reiterates that nothing on Highlander: The Series is sacred. 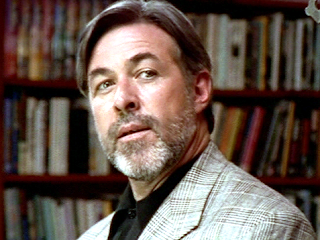 Though I don’t really have a preference one way or another, I like Charlie DeSalvo and his lack of immortal awareness- and I like Richie’s new immortal status, too.  However, Season 2 seems unable to handle both characters at the same time.  Despite Philip Akin’s (War of the Worlds) initial antagonism and wonderful sardonic humor, it’s strange to see another man become MacLeod’s new best friend- especially when we already have two men in the cast who know his secrets.  Charlie’s continued questions and seemingly alternating appearances with an uneven and barely there Richie makes no sense. Why do something so huge like making a character immortal, and then have him largely disappear after learning the ropes of immortality?  These budding immortal questions and experiences are far more interesting to fantasy adventure audiences than oft seen dojo fu crime. Besides, isn’t that what Highlander is really supposed to be about?  The perfect Jim Byrnes (Sanctuary) as watcher Joe Dawson is also nearly non-existent in the first half of the season. Why set up the Hunters and the Watchers with such zest and intrigue only to string them along with random wrist tattoos for ten episodes? 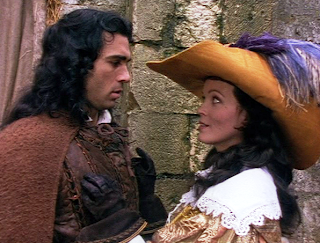 Fortunately, returning favorites and guest villains raise Season 2 to a new level. The titular ‘Return of Amanda’ and ‘Legacy’ has Elizabeth Gracen’s immortal con visiting for some much needed humor and female familiarity post-Tessa. Forever Knight alum Geraint Wyn Davies also has some wicked fun in ‘Turnabout’, and rocker Roland Gift returns as Xavier St. Cloud to join rogue watcher James Horton (Peter Hudson, Cousin William) in the stand out ‘Unholy Alliance I and II’. Recurring regular Michel Modo as the bemusing and pesky French neighbor Maurice also provides some balance when the immortal life gets a little too heavy, and truly, I love the spooky Victorian joy of ‘The Vampire’.
Though still a little dated with the pleated pants and too much denim, the styles of Season 2 are much improved.  The sweat suits and work out gear are kind of weird, but we’re in a more relaxed leather and jeans phase now thanks to the dojo. No high-end shoulder pads here!  Although I once again am hung up on exactly where those stairs in the dojo lead to, Mac’s new loft is a sweet pad. You can imagine him still living there today- and he even has a television now!  Again, the required latter half of the season French locations add ambiance and foreign immortal intrigue to Highlander: The Series. Even with some more of the iffy French dubbing, I think I wish they would just remain in France.  The period recreations are again wonderful, but I do wonder if they also follow a pattern of production.  Generally, it seems more recent past and American West motifs share with Seacouver; 18th century and earlier designs are always in the second half of the season with France.  Some of the Quickening designs are also still better than others are.  Richie’s first one pops a few paint cans, wow. Eh, on a lighter note, where do they keep their ^$&*(%%# swords? 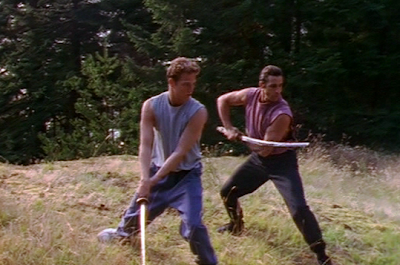 Highlander: The Series can be found online at sites like Hulu and for rent as well.  While the sets are affordable enough, again Season 2 provides an exhaustive amount of interviews, commentaries, and trivia that is best left for the complete franchise enthusiast and not newbies.  A few kinky scenes and some good old-fashioned violent beheadings might also be too much for super young audiences.  However, overall I am continually impressed with how well this series has held up in story telling and entertainment.  Highlander: The Series – learn it, live it, love it with Season 2 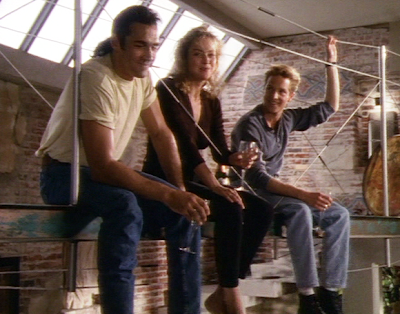 Posted by Kristin Battestella at 1:35 AM

Another great write-up. I didn't even know that the female reporter was ever in the opening credits. I also think that they would have written out Tessa at some point. She almost held Duncan back.

I've written a fair amount of Highlander episode reviews myself, which you can see at http://www.coronajumper.com/search/label/Highlander if you'd like. They aren't as in-depth or analytical as what you have here, as I instead try to have fun with the episodes and lampoon them a bit. Planning on covering the first three seasons and ending with Finale, which I consider the high point of the series; halfway there now.

Also - that very last picture you posted is from "The Darkness", and it's burned into my memory as the last scene where we see the three (at the time) main characters hanging out and looking happy. Duncan really is a completely different character after that, and in a way I prefer his more cheerful season one persona. It's similar to the show 24, where Jack Bauer in season 1 is a much happier, more easygoing character than the Jack Bauer of all other seasons.

I grew up on this show; as a teenager I wanted to grow up to be like Duncan Macleod. Not sure how much I succeeded, though he's a great role model to have.

So cool that you are on a Highlander opus as well! :) Some of the shows, you do simply have to laugh at them, especially the last season.

The show does get darker as it goes on though. In some ways it can be viewed as the first seasons pre watchers as a bit different than the rest, but some great things happen along the way. :)

Hello again! Years later, I'm revisiting and re-reading your reviews after finally finishing Season 3 on my own site. Like I mentioned here, the goal back then was to end with Finale but after the incredible Kalas arc I'm definitely going to keep going with the rest of the series in the future. I mean S3 is when it's just getting good!