Still Plenty of Goods for Highlander Season 4
By Kristin Battestella
The goodness continues in 1995 for the fourth season of Highlander: The Series.  In fact, the immortal angst just keeps getting better and better- and dare I say it- even great.
Duncan MacLeod (Adrian Paul) and his on again off again immortal love Amanda (Elizabeth Gracen) must face deadly rogue immortals and even a Dark Quickening while 5,000 year old Methos (Peter Wingfield) falls in love with a dying mortal woman.  When the Watcher Tribunal investigates watcher Joe Dawson (Jim Byrnes) for his friendship with Duncan and fellow immortal Richie Ryan (Stan Kirsch), Joe must fight for not just his status in the secret organization sworn to observe immortals but never interfere- but also for his very life. 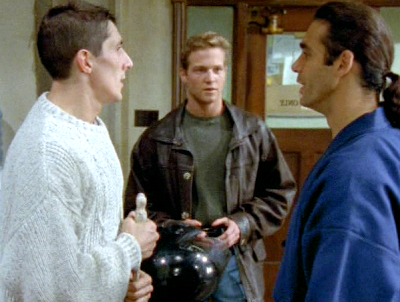 Well, Highlander: The Series is now a class unto itself, complete with some seriously sweet opening credits.  Everything you need to know about immortals, Duncan MacLeod, and the Watchers is swiftly tressed out in style with this introduction!  At this point, Highlander: The Series is a completely separate entity from the inferior sequel films, even the sword sparring shot of theatrical Highlander Connor MacLeod is gone from the opening designs.  Season 4’s opener “Homeland” rekindles Duncan’s Scottish roots in fine form, exploring not just immortals freely beyond the film series’ restraints but also filling in Duncan’s timeline with both new places from the past and contemporary individual dilemmas.  Not oft touched subjects such as Vietnam are mixed with lovely immortal examinations on war, death, and revenge.  Mental illness is debated in “The Innocent,” creativity and human genius versus immortality are questioned in “Timeless,” and immortals seeking fame compared to those who are best left forgetting their immortal transgressions are contrasted in “The Immortal Cimoli” and “Through a Glass, Darkly.”  I think I’ll stop there; otherwise, I may end up chatting about all 22 episodes! 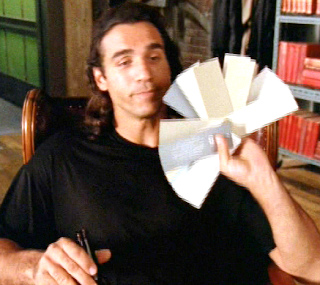 Oh dear oh dear, Duncan MacLeod can certainly be a melancholy bloke, can’t he? His continued somber stance and high road in each weekly dilemma is a wonderful contrast to his dishing out periodic beheadings.  Can he be both a warrior and loyal to moral oaths he has promised to himself and other immortals over the years? “Reluctant Heroes,” “The Wrath of Kali,” and “Chivalry” put Mac between the mortal rock and the immortal hard place again and again.  Sure, there may be great action and battles when we meet an immortal villain of the week, but Highlander: The Series is more wonderful when it brings immortal friends together and puts MacLeod in the middle.  Naturally then, it’s just great to see Mac go bad in “Something Wicked” and “Deliverance.” Not only can Paul- who also directed two episodes this season- be crazy cool, but it is so sweet to see Duncan knowingly struggle against doing wrongs he has fought against for centuries. Golly, Dark Duncan does a lot of using and abusing of any and all in his wake!  Likewise, the restored MacLeod pains over being called to assassinate in “Promises.”  Wow, immortality isn’t all it’s cracked up to be- who knew? 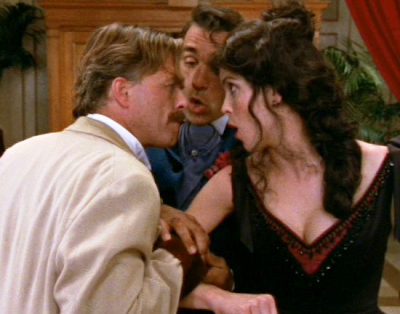 Fortunately, MacLeod’s sexy run and gun lady foil Amanda adds some much needed cheerfulness and fun in “Double Eagle.” We even get to see a more tender and loving side to Elizabeth Gracen’s vixen in “Reunion,” where she bonds with Mac’s pregnant ex, Lisa Howard guesting as Dr. Anne Lindsay. “The Colonel” provides some great WWI action that comes back to haunt Mac- with Amanda being the one who saves the day for a change! By contrast, Peter Wingfield as Methos is wonderful as the angry and pesky advocate to MacLeod.  Despite his often sidelined observant and pacifist stance, Methos is not afraid to do what Mac cannot for the good at hand- or even the personal if it suits him.  He wouldn’t have gotten very far without being selfish would he? It’s never out right stated, but you have to wonder if Amanda and Methos have met before. “Methuselah’s Gift” may be one of the best non-MacLeod centric episodes of the series, and every time I watch it, it drives me insane that Wingfield and Gracen are not series regulars.  Why can’t they be in the credits?  These two appear in the same amount of episodes, if not more, than credited regulars Stan Kirsch and Jim Byrnes do. If all four were listed, it wouldn’t seem like such a disparity, but rather a rotation of supporting players.  Yes, its stupid things like this that keep me up at night! 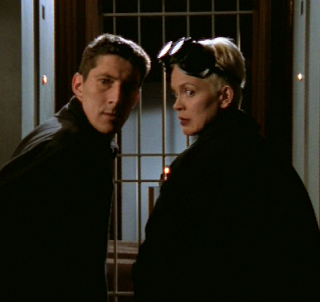 And yes, Richie finally has something to do in “The Innocent” and “Leader of the Pack.”  Even if it’s goodness at the time, he always ends up disappearing. Lisa Howard’s final appearance as Anne in “The Blitz,” tells us so much more than Richie’s sporadic appearances. If Kirsch is actually used like a guest star as needed, then why does he get to be in the ^&*(%#@ opening credits? Ahhh!   Fortunately, Roger Daltry and Roland Gift also return for “Till Death” and “Double Jeopardy.”  Even if there are 7 immortals in one episode, it seems no more than 4 or 5 are ever onscreen together- what’s up with that? Is that some sort of rule like Holy Ground that we don’t know about? This season I also feel like we don’t get enough of Joe Dawson- especially because what we do get teases us with the notion that there’s so much more to tell.  “Brothers in Arms” wonderfully highlights how Dawson came to the Watchers while also giving closure for Philip Akin and his Charlie DeSalvo.  Although they are almost clip shows recapping some of the immortal and watcher hijinks, the two-part finale “Judgment Day” and “One Minute to Midnight” recap the best parts of Highlander: The Series thus far. All those times you have questioned how Joe and MacLeod got away with all the death and secrecy have indeed come back to haunt them. 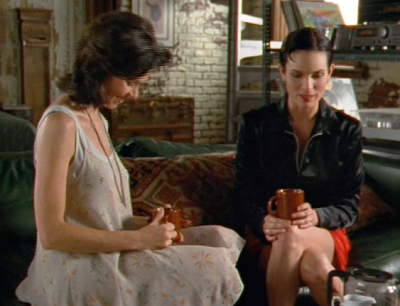 I’ve already commented previously that some of the Quickenings in Highlander: The Series seem a little orgasmic, to say the least.  However, in this recent rewatching, I’m also seeing more homosexual innuendo and gay subtext than I used to notice.  Bare butt shots and picking out wallpaper together? Some of the relationships implied here and in Season 5- both male and female- even the entire notion of men cutting off each other’s heads to take one’s essence, the swordfights themselves, each immortal having a teacher or mentor who shows them the ways of it all.  Dear Lord, the way they hide on Holy Ground and become Priests with secrets!   Maybe I’m just older and wiser on seeing such themes onscreen now, or perhaps it is bemusing for some to look for such tongue in cheek goodness. It isn’t so overt to ruin Highlander: The Series for those not interested in such topics, but audiences who enjoy the male bonding and non traditional relationships may find some frank discussion of true companionship- with immortal twists of course.  For the series not to acknowledge the special life long relationships immortals can share would simply be unrealistic. 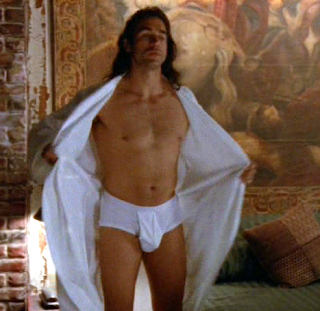 (This is how MacLeod greets Richie?)
Again, I must say those opening credits are sweet- capturing the essence of the show in proper 90s style.  We simply don’t get fine introductions like this anymore! The period designs are again great, from the French Revolution to the Old West and World War II.  The house that Mac rebuilds is also neat- even if the real estate prices and square footage given onscreen don’t quite match up! The leather jackets and trench coats still look cool and timeless compared to some of the more colorful and crazy fashions from some immortals. What were they thinking?  The jazzy period music and Swing styles are also sweet as are new times and places like India.  Even past places we are used to seeing look good, more than good, high end even.  Fans who want to know all the behind the scenes ins and outs are again welcome to a smorgasbord of features.  Almost every episode offers some or all of the following: an audio and/or video commentary, a 5 or 10 minute behind the scenes and/or retrospective interview with cast and crew, Watcher’s Chronicles, deleted scenes, bloopers- and there’s a CD with every script and the series call sheets.  Mother Hubbard! 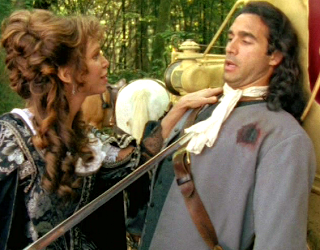 Simply put, if you are a fan of intelligent timeless action and adventure fantasy, there is no reason you shouldn’t love Highlander: The Series

.  We’re done Season 4 now, come on get with it before you loose your head!
Posted by Kristin Battestella at 3:11 AM

I never noticed the homosexual undertones in some aspects of the Highlander-verse until now, but since you laid them out I can definitely see what you mean. This puts Highlander in the company of a lot of great literature that tapped into sexual taboos in metaphorical ways.

Even Dragonball Z does it to a very minimal and simplistic extent. Later in the series, male characters reach the highest levels of power by wearing earrings and sprouting long hair. Aside from this, Gokou and Vegeta (the primary rivals) seem to think about each other more than they think about their significant others, and they get out their frustration by physically fighting each other.

I didn't notice it when I was younger either, but I love that Highlander does touch upon some of the unconventional relationships of the immortals with maturity and honestly. Today I'm sure there would be an obvious, sexing it up approach.

I like the way the immortals were explored as people all around. Good stuff. :)