Dark Shadows Collection 11 Brings It On!
By Kristin Battestella
No, that’s not a typo.  Thanks to my favoritism of family werewolf Quentin Collins, I’ve begun upgrading my VHS collection of the sixties gothic soap opera Dark Shadows almost smack in the middle of the DVD releases.  Collection 11 puts away weaker borrowed storylines, retires washed up characters, and begins scary hints of lycanthropy and disturbing hauntings at Collingwood. Glory! 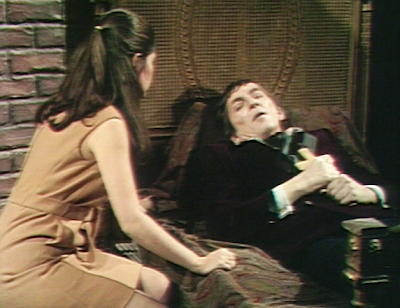 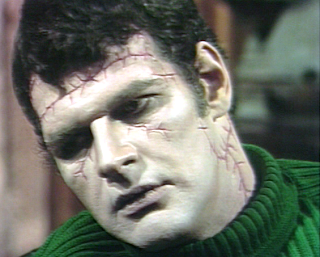 Naturally, there is a lot to cover here!  40 episodes over 4 discs begin with an attempted strangulation at the Old House and steadily build up all the vampirism, werwolves, witches, Frankenstonian monsters, crazy dreams, time travel, and skeletons a Dark Shadows fan could ask for. (I don’t care if I ended the sentence with a preposition!) The opening narrations catch the viewer up on the themes of each episode- the uninitiated can get the gist of what went on before Collection 11 quickly enough.  Even if one is still slightly confused regarding the resolution of the Adam and Eve storyline; that is a heck of a lot better than that on and on Dream Curse that came before, oiy! Although one can’t really fault Robert Rodan for being too wooden- he is after all, playing the1968 be-turtlenecked Frankenstein’s Monster Adam. Marie Wallace, however, has a lot of fun with her vavavavoomed Eve. The return to 1795 resolving Peter Bradford/Jeff Clark and his marriage to Victoria Winters are unfortunately, a bit slow, even boring.  I’ve never been a fan of Roger Davis and his constant over the top cases of mistaken identity, and Joel Crothers’ Joe Haskell will soon depart the series in hysterical fashion as well. Betsy Durkin and later Carolyn Groves briefly replace the pregnant and exiting Alexandra Motlke as Vicki and send the character to a very annoying end that can’t get over fast enough. Honestly, I used to fast forward through some of these repeated scenes of folks just talking about everything that has already happened, as soaps naturally so often do. Thankfully, Clarice Blackburn is a riot as the ever fanatical housekeeper Mrs. Johnson! 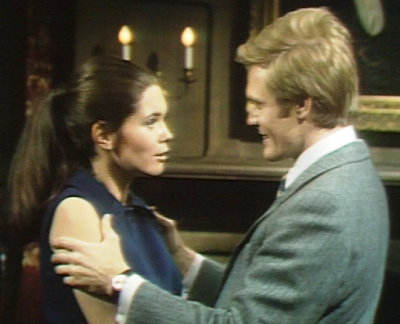 Fortunately- nay wonderfully- the heartfelt, theatre like one on one interactions, well planned scripts, and well played storylines make for great conversations and action filled with heavy supernatural angst or juicy look fair and feel foul mastery. Despite such a large ensemble cast and wealth of interwoven storylines, remember budget restrictions mean generally only 6 or less players appear per episode. Naturally, some players garner more attention than others do, with star Jonathan Frid being one of them. Early on, Barnabas does his usual sneaking out at dusk and that beloved vampire torment.  However, now its great fun to see Dark Shadows’ famed vampire as the hypnotized victim of the lovely but deadly Lara Parker as Angelique.  Frid handles the ironic reversal and his demented attachment to Angelique beautifully.  Likewise, Parker is still alluring, deadly, and disturbingly devoted.   And oh, the delightful Grayson Hall as our resident blood doctor and queen of the sedative Dr. Julia Hoffman!  No matter how crazy things get or how many times somebody says, “I don’t understand!” we like Julia and her equally unrequited loyalty to Barnabas.  Thayer David is also ever charming in all his incarnations as Stokes, and John Karlen is Willie Loomis, simply put. 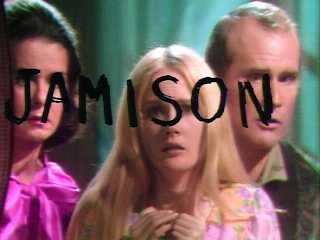 Well, Humbert Allen Astredo makes quite the juicy villain to open Collection 11- foiling Barnabas, plotting with Angelique and Adam whilst also dealing with Diablos himself! Kathryn Leigh Scott’s Maggie Evans seems an odd match for Nicholas Blair, but her future position as governess at Collinwood increases her significance again dramatically.  Where her young naïveté looks amiss with Blair, Scott shines as the torment, terrorizing and hauntings continue in Collection 12. Unfortunately, Nancy Barrett doesn’t appear as Carolyn Stoddard until Disc 3 and doesn’t have much to do but not understand her werewolf romance.  And dear, sweet, classy and caring but supernaturally clueless star Joan Bennett always wants to help everybody and put up the entire town at crazy Collinwood! Strangely, I’ve always found her built in absentee mausoleum storyline quite fun. Louis Edmunds also doesn’t appear much this set, unless it is to be the unbelieving fodder for all the supernatural, as usual. 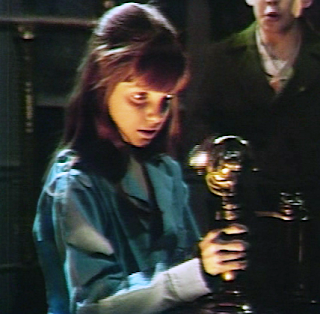 The older storylines and players are wrapped up somewhat quickly or simply left upon the wayside for the werewolf and ghost storylines, but better to loose all that fluff in favor of the beginning of one of the more popular sequences from Dark Shadows. Of course, Don Briscoe gets a lot of fun reactions as the never mentioned as twins but obviously looking exactly alike Tom and Chris Jennings.  And he certainly appears to be having fun with vampy Tom in contrast to his agonizing werewolf Chris.   Briscoe also has a tender rapport with his young co-star, Denise Nickerson (Willy Wonka and the Chocolate Factory). Though Amy is a little annoying to start, and David Henesy can also get irritating  when the children become possessed;  we feel for these kids in peril more than the crazy over the top sixties direction.   The kids actually do a better job then most juvenile players forced to act with thin air, and compared to later ladies too old for the part, Nickerson is probably the best young girl to appear on Dark Shadows.  On a shallow note, I love the innocent way Amy calls for Quentin, and hey, I used to pretend with my old candlestick telephone, too, I’m just saying.  Actually, these are the parts of the show that might not be best for impressionable children.  Sure, there are scary black masses and demonic summonings before and there will most definitely be crazier Leviathans and The Head of Judah Zachary to come.  However, the kids in Collection 11 do some iffy séances, possessive invocations, and near deadly deceptive tricks on the adults thanks to the ghostly influences ala The Innocents.
Of course, Quentin’s ghost is scary before we even seen him thanks to all those naughty influences and creepy sound effects.  Fun and shocking objects moving by themselves, phantom writing sends the ladies screaming. The poltergeist suspense builds beautifully thanks to nothing but player performance and smoke and mirrors.  Nothing neither flashy nor modern gore nor nudity is needed here- just great, unseen scary. When we do finally see the silent and bemutton chopped David Selby (Falcon Crest) as Quentin Collins, yowza!  The creepy stare, the sinister games, possessing children, all that innuendo and secrecy… 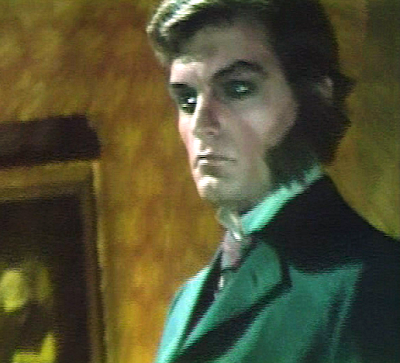 Wait for it; wait for it- Is that ‘Quentin’s Theme’ I hear?  I have the ‘Shadows of the Night’ 45, too, just saying.  Robert Cobert’s quintessential score is great as always. The music and scary soundtrack is innocent when needed, shocking and scary and right on cue- most of the time.  Speaking of fun production values, wow, check out those itty bitty pinprick vampire bites!  The vamp designs, werewolf makeup, and sixties hairstyles are indeed of the quick and easy values of the time.  Maggie’s fashions especially look a little too young and juvenile for her age- sailor outfits and bows in her hair. Likewise, Vicki seems frumpy and ill styled.   Fortunately, Joan Bennett still looks fashionable thanks to her own classy styles and some of Julia’s fashions and Angelique’s wispy vampy dresses still seem in vogue, too. The men’s styles and jackets are suave as well- unlike some of those disastrous seventies orange and garish stripes to come.  The brief return to the 1795- or 1796 depending on who is flubbing up the lines or the time- also looks the part, and the Victorian hints here will come to the style hilt for Collection 12 and Collection 13. 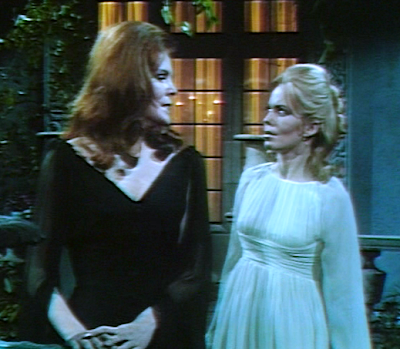 Naturally, the fun, cardboard sets on Dark Shadows look so badly dated, bland and on the cheap yet are so indicative of all that stylish, gothic, old school, and spooky magic. Ah, those blue candles and green sheets!  That ring! The time traveling afghan! Wobbly plastic trees and crumbling Styrofoam headstones! Stock photography, repeated establishing shots, and rudimentary onscreen effects get pretty bad indeed, but again it all does the trick in keeping everything good and gothic.  Yes, we may laugh at all the mistakes and hokeyness- and let’s not forget those cameo appearances from crewmembers, their shadows, and that extra special guest star, the boom mike. However, in many ways, Dark Shadows’ dated flaws and now vintage looks have strengthened the appeal of the series.  Downtrodden sixties looks like this can’t be recreated today. There’s something special about how simplistically they can rearrange a few pieces of furniture to go along with the time periods, big candelabras, and hefty velvet curtains.  Good luck making all your laptops and flatscreens spooky and hidden in today’s shows or removing that contemporary technology all together for good old fashioned isolation and terror.
Though dated a bit itself, Collection 11 has a neat vault animation for its DVD menu.  It’s amusing that there is a written warning on the set explaining all the understandable mistakes and technological errors in the episodes, too. You’d think folks would know it’s the 1968 soap opera jumping and not their DVD players!  (Although the lines and streaks did make this a tough one to screencapture.) There are no subtitles of course, but it is so much fun waiting for one of those famous flub ups or a blatant looks at the cue cards. The volume here is a little uneven, too; the remote control is a must for the sudden music and big screams.  Viewers can also choose a selected episode or play all options.  With episodes 614- 655 each at 22 minutes or less, it’s actually easy to marathon as desired for a night alone or as a backdrop to a demented party.  I always think there needs to be a lot of time invested to watch Dark Shadows, but going Collection by Collection isn’t as viewing insurmountable as it may seem.  4 or 5 episodes for a few hours a night every few days and I was finished Collection 11 in a few weeks.  Interviews per disc with Marie Wallace, Alexandra Moltke, Dan Curtis, and Nancy Barrett also add a few extra minutes of fun tidbits and nostalgia. 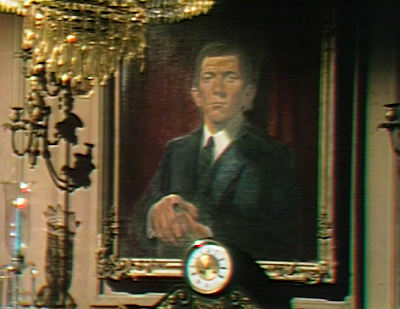 Yes, Dark Shadows has a lot of material, but with the included booklet for Collection 11 or online episode guide handy, one can skip or pinpoint exactly where he or she wants to watch- or which Collections they choose.   There’s no need for returning fans or invited newcomers to plod through the ridiculous storylines or early, non-supernatural stories if those aren’t desired.  Some very young, under 10 perhaps, might be scared by Dark Shadows, but today’s tweens growing out of modern glitter vamps or leaning towards a retro bend can certainly enjoy along with original audiences and second generation viewers like myself.  Werewolf fans and lovers of all things spooky can jump right in with Dark Shadows: Collection 11


I get carried away with the Dark Shadows reviews!

Thanks for taking the time to read and comment, Matilda!