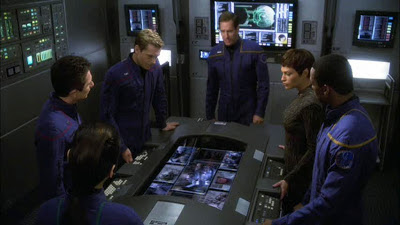 Enterprise Season 2 is the Low Point of the Series

Understandably, Enterprise had growing pains relating to its prequel approach in its debut season.  However, after a lot of promise in its first year, the second season of the last Star Trek spin off sinks to new lows and most likely put the final nail in the series’ coffin- two years in advance. 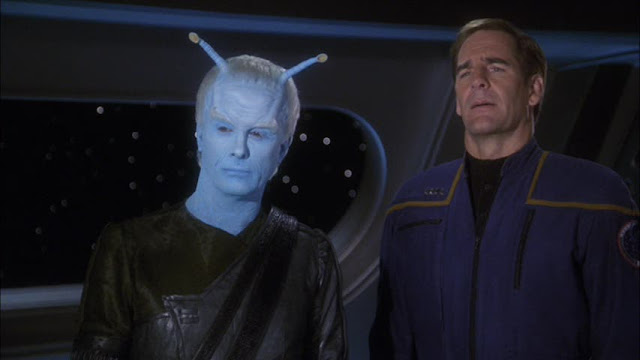 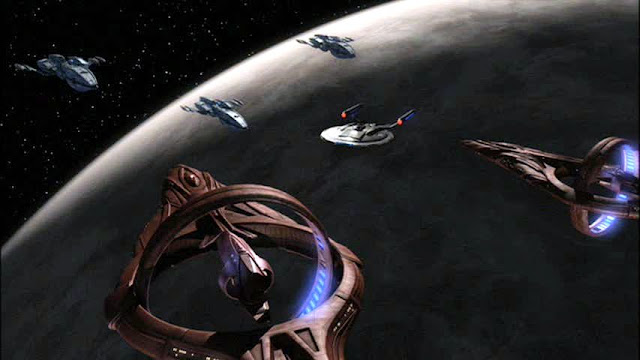 The “Shockwave Part 2” cliffhanger resolution starts Enterprise’s Year 2 off great. The offbeat “Carbon Creek,” hints of Romulan tensions in “Minefield,” and a touch of spooky in “Dead Stop” all build solid Star Trek mood and science fiction atmosphere. These are unique episodes with prequel pieces that no other Trek series could have done, and each has the viewer returning week after week.  “The Seventh” is a worthy T’Pol espionage adventure, and “The Communicator” shows Trek audiences how pre-industrial contact can go horribly awry. Now that we know the crew a little better, it’s also fun to see them go nutty in “Singularity” or camp out in “The Catwalk.”  Jeffrey Combs returns as the Andorian Shran in “Cease Fire,” and “Future Tense” is a strong time episode that remains smartly TOS instead of Temporal Cold War. “The Breach” also has some excellent science fiction debates between Archer and Dr. Phlox, and these shows are a great example of how Enterprise should always be. This crew toes the no Prime Directive line, and sometimes the humans are the jerks of the budding galactic community, yes. They often get into trouble by helping or not helping alien friends and neighbors. Unlike some previous episodic Trek that kept things nice, easy, and tidy, however, consequences can linger on Enterprise, and “Cogenitor” is an awesome example of SF mistakes and misunderstandings that cannot be taken back.

Thus far, it sounds like Enterprise’s second season is nothing but glory, I know.  Unfortunately, a batch of bad episodes sent the show’s viewership into a tailspin from which it never recovered.  After the notoriously Freudian forced “A Night in Sickbay,” Enterprise drove itself further down with the rehashedly bad “Precious Cargo” and the typical save the frontier town “Marauders.” “Vanishing Point” might not be a bad show in and of itself, but the Hoshi Sato (Linda Park) dreamt it all crux is enough to anger audiences into never watching again. Likewise, “Dawn” is a complete Enemy Mine joke, and the serious episodes can’t gain any momentum thanks to unacceptable clunkers like this. Although “The Crossing” and “Horizon” are hokey and “Stigma” is obvious in its AIDS allegory, it’s tough to take even the half decent amid so much bad.  “Canamar,” “Judgment,” and “Bounty” also suffer from statistical retreads, for how many times can Archer be abducted or kidnapped, hijacked or imprisoned, or taken hostage and committed in one season? We seen the nods to Star Trek VI, love the Klingons, Tellarites, and faux pon farr. Sadly, these are all plots we’ve seen too much already, and its all the more infuriating here because Enterprise should be doing so much more with its pre-Kirk designs. 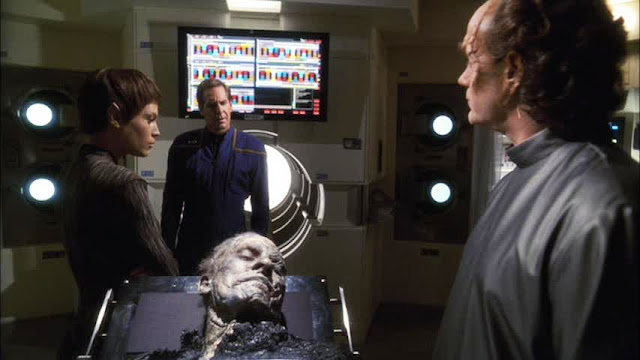 “Regeneration” encapsulates this very conundrum. On its own, this is a fine episode, complete with superb X-Files spooky and scares, action plotting, and big consequences. Were this simply a rogue horror episode, no one would object to its appearance on Enterprise. Unfortunately, longtime Trek viewers will groan at the officially unofficial appearance of the Borg, 24th century tech babble, and the Delta Quadrant paradoxes created here. Is it a good show? Yes. Does it belong on Enterprise? No. “First Flight,” by contrast, shows us Archer’s motivations in the early Warp program and provides a lovely guest performance by Keith Carradine.  This bumbling San Fran base and competitive space race storyline makes one wonder why Enterprise didn’t begin its first season on Earth pre-launch as the producers momentarily envisaged. If you’re not going to give us the Romulan War and the founding of the Federation, why not begin the beguine? Likewise, “The Expanse” season finale feels cramped and time compressed in its rush to return to Earth despite a sweetness to its bittersweet. Why couldn’t they have traded all those clunker episodes for a few more ending hours of a ship in mourning? Perhaps then spending too much time on Earth under an alien attack was too close to 9/11 memories, but it would have certainly made for some fine SF drama. 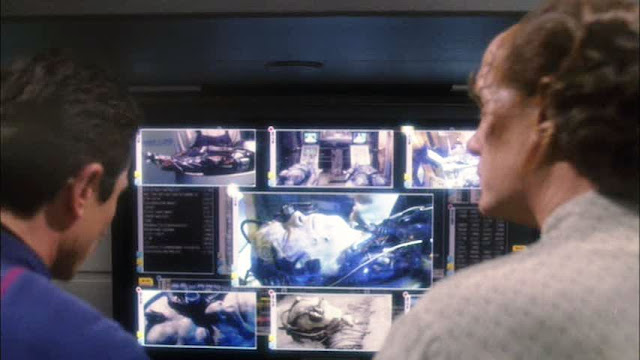 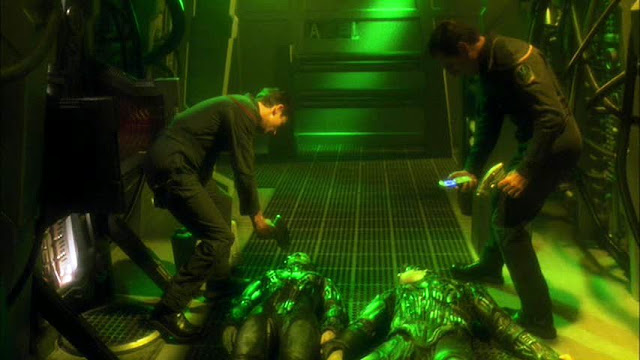 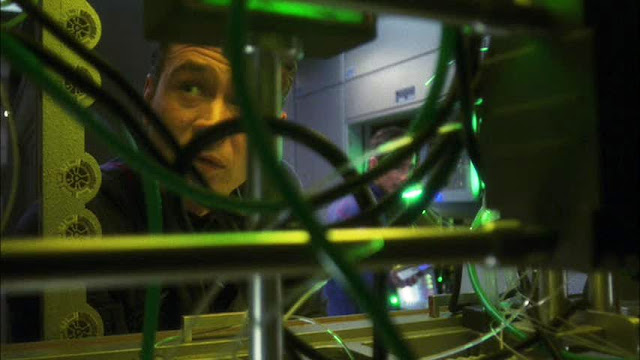 I’ve focused more on episodes in this Year 2 analysis than characters as usual simply because the likeable players on Enterprise are not the problem.  Well, Anthony Montgomery as pilot Travis Mayweather somehow has even less to do then he did before, but otherwise, this cast is vastly superior to Voyager’s ensemble bane. Despite some fine episodes and developments both good and bad for Archer, Trip, and T’Pol, I sincerely think that if this season had been skipped in its entirety, Enterprise might have continued beyond its four years.  No cheap gimmicks, sex jokes, or humorless thrills were spared in the dragging the bad sci-fi thru the mud here.  And what makes this all really sad is that we got this instead of all the aforementioned Federation and Romulan rumblings. With those dynamite plots – the ones most Star Trek audiences had been waiting for since the moment a prequel was mentioned – who knows what glories Star Trek might still be having on television today.  Alas, Enterprise was on borrowed time once viewers turned away from this shoddy season. 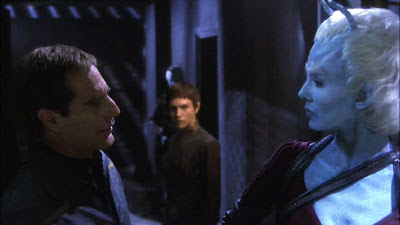 There is quality in Season 2 of Enterprise, yes.  However, I wax nostalgic on the possibilities of what this series could have been because this sophomore year served up such infamous crap. Only die-hard loyalists can enjoy this season, and that’s with skipping half the shows. I love Enterprise, I really do. The realistic players and 22nd century opportunities do indeed come in Seasons 3 and 4, so do hang on with Enterprise despite the Year 2 iffy. Please?
Posted by Kristin Battestella at 12:41 AM