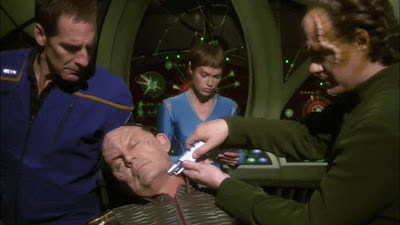 After the stinky that is Enterprise Season 2, the Star Trek spinoff took a new, darker direction with a yearlong storyline arc for Season 3.  While some of this lengthy puzzle and its over-reaching development are uneven, overall, this involved attempt is a strong, pleasing turn for the series.


After Earth is attacked by a mysterious alien race known as the Xindi, Captain Jonathan Archer (Scott Bakula) takes Starfleet’s first Warp 5 vessel the NX-01 Enterprise into a perilous region of space known as The Expanse. Despite warnings from Science Officer T’Pol (Jolene Blalock) and the Vulcan High Command, the vengeful Archer and Chief Engineer Trip Tucker (Connor Trinneer) intend to find the Xindi home world and destroy their next deadly weapon before it reaches Earth. Lieutenant Malcolm Reed (Dominic Keating), however, struggles with the new MACO military contingent aboard Enterprise as the crew makes ready to face an enemy out to destroy all of humanity. 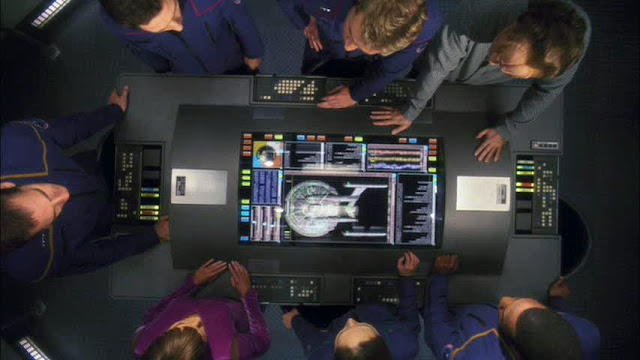 The continuing arc and onscreen mission gets off to a great start with “The Xindi,” and “Anomaly” establishes the dangers of The Expanse piece by piece with stepped up effects and weird but good-looking visuals. Subtle filming changes, upside down camera work, and flipped photography angles add to the intense music, faster angst, and all around intensity of episodes like “Twilight.” Yes, this one is a stand-alone reset amid a yearlong telling, but it is a quite awesomely acted, paced, and executed tale. “Similitude” is also heavy for Connor Trinneer as Trip Tucker, and Enterprise should have continued further on this drastic possibility rather than squeeze in more undercooking for Anthony Montgomery as Travis Mayweather and ho hum for Linda Park as Hoshi Sato. The serious science fiction and morally iffy Xindi torture in “Stratagem” is something we haven’t seen on Star Trek in some time – if at all – and this ambiguity is an excellent change onscreen and off. I wish more attention was given to all the MACOs beyond semi regular Steven Culp (Desperate Housewives, JAG) as Major Hayes, but “Harbinger” packs in three multi layered plots – and most of it is very, very good thanks to new writer Manny Coto (24, Dexter). I could do without the T’Pol TnA spectacle and forced neuro-pressure kinky taking over, but the Trip/T’Pol relationship speculations are integral to the fun, what if paradox of “E2.”  “North Star” – an excellent looking western – and the time traveling “Carpenter Street” also depart on the Xindi arc with some lightheartedness whilst still giving critical, well done hints. 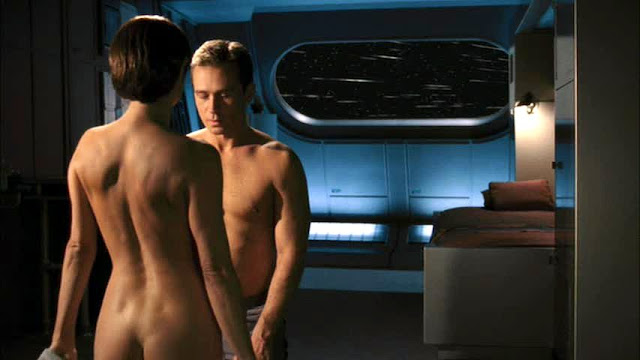 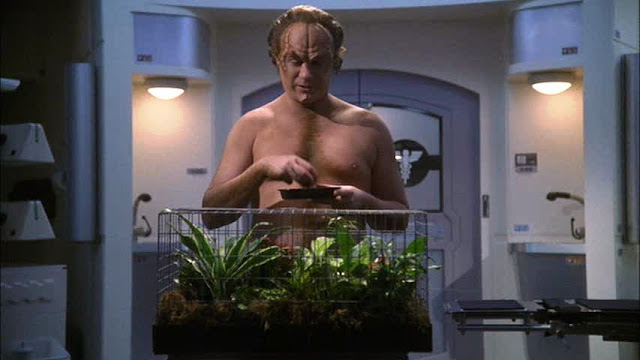 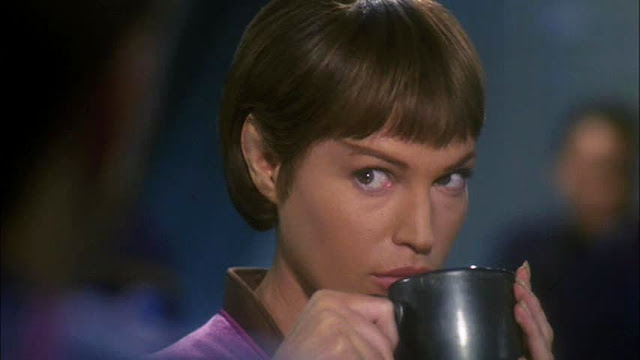 John Billingsley as Doctor Phlox adds to the pleasant scares and paranoia in “Doctors Orders” as well. Although we’ve seen this type of isolation on Voyager before, the fine acting and visual trickery layer among the pieces of the Xindi puzzle, as the Sphere Builders and spatial anomalies are slowly and carefully explained throughout the season.  Parts of “Extinction” and “Rajiin” are clunky, uneven, and spread too thin at the beginning of the season. However, pieces of the overall arc are hinted upon in seemingly stand-alone episodes like “Impulse” and “Exile” before the solid pain, death, and loss for Archer, Trip, T’Pol, and oft-Trek guest Randy Oglesby as the Xindi leader Degra in “Azati Prime,” “Damage,” and “The Forgotten.” The Xindi plots come together nicely despite the usual space faring zealots in “Chosen Realm” and gone nutty of “The Hatchery,” and heavy topics like Archer’s stealing, alien deceptions, and T’Pol’s addictions linger thru the season.  These unTrek ideals might be a grasp at ratings just as much as character development, but “The Council,” “Countdown,” and “Zero Hour” do damn fining in pulling out all the stops for a great Third Season finale.Unfortunately, Year 3’s cliffhanger to Season 4 somehow ends up as a Nazi cliché and pulls the rug out from under this mostly darn good season.  Show runners Rick Berman and Brannon Braga should have left the reins to Manny Coto much sooner, indeed. 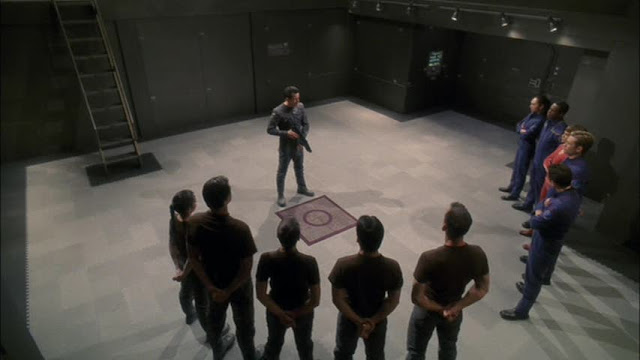 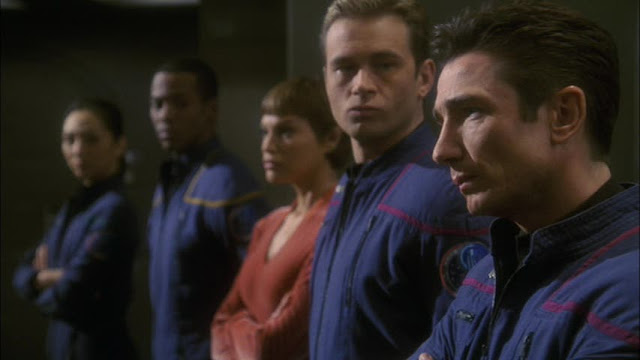 It feels like this has been a short Enterprise review, but I don’t want to give away all the Xindi secrets! Already reduced to 24 episodes, this season might have been tauter and trouble free if there had been even less shows, as the uneven pacing and seemingly unimportant episodes are still needed to fill the episode order with cheaper bottle shows. Yes, some traditional Star Trek fans may dislike this atypical, continuous plot, but truly, Enterprise should have been this way all along. This is thee dark, 21st century way to do Star Trek on TV, serialized and with something massive at stake. Had there been ongoing plots and can’t miss suspense since day one, Enterprise might have retained audiences from week to week and saved itself from the abysmal tune outs of Year 2. Lengthy storylines and scenarios were the height of Deep Space Nine, but Enterprise wasted too much time continuing the reverse exploration of the reverse ho hum of Voyager and fell flat and unfulfilled in its predecessor’s wake. After 14 years of lowered expectations thanks to DS9 and Voyager, why should anyone give another 4 years of Enterprise a chance? 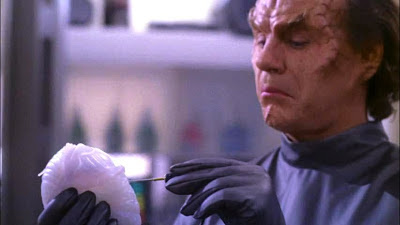 Despite ups and downs in Season 1 and the stinky of Season 2, the Voyager burn out was too fresh in audiences’ minds to put up with Enterprise – even when it got darn good here. I’ve praised Enterprise’s final season before, but new Trek viewers or returning SF fans can begin with Season 3, move on to the solid mini arcs of Year 4, and then return to the first two seasons. Now in retrospect, new audiences are discovering the two seasons plus of solid good on Enterprise actually weren’t that bad at all. Who knew?

Posted by Kristin Battestella at 2:30 AM