Another night, another quartet of foreign witches, campy cults, musical devils, and a whole lot of sexy, scary panache! 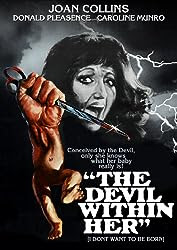 The Devil Within Her – We know the happiness of having a baby is moot for this 1975 British tale once the hip title music, disturbing medical tools, heady zooming lights, and a writhing Joan Collins (Dynasty) start this 90 minutes off with an arduous delivery. There’s surprisingly little blood and gore considering the amounts shown onscreen then and now – not to mention the reality of a difficult 12 lb birth! – but toss in a baby who will scratch his mother, bite the maid, tear up his own toys or try to drown his nurse and the mood is set! What he does to dad Ralph Bates (Dr. Jekyll and Sister Hyde), well…hehehehe. I wonder if Adam Sandler’s Little Nicky title came from Collins’ screaming “Nicky! Nicky!” when her devil baby flips out at his christening? Period but pointless London streets and retro cars accent a juicy Caroline Munroe (The Spy Who Loved Me), brief strip club nudity, and a laughably filmed sex scene, but the flashback narration should have been shown instead of told. Most of this so serious is just too hokey and amusing because without special effects for our knife wielding newborn, the child violence scenes have to be bad up close shots or humorous cut away action. An eerie dream sequence is horror fine, but flashes of spurned dwarf George Claydon (Willy Wonka & the Chocolate Factory) as a baby are absurd. Faux Italian accents and superstitious medieval talk are also ridiculous, and the little person portrayals as evil, cursing, freakish, undesirable folk run rampant. A viewer can’t tell if the plot is chastising and blaming the eponymous Lucy for her stripping past and marrying rich or rooting for her as a victim of this monstrous baby. It’s tough to take the intriguing notions of an evil birth or a post partum mother seriously as well thanks to the surprisingly amusing but misogynistic men who think she must be exaggerating the bad baby behavior. This could have been something unseen sinister or all in a mother’s demented state of mind, but awkward scenes debating medicine versus religious magic fill up the time without really discussing any intelligent or scary possibilities. Fortunately, fun performances from doctor Donald Pleasence (Halloween) and nun Eileen Atkins (Cranford) can’t be faulted, and there’s enough bemusement for the audience to see the outlandish through to the inexplicable finale. I mean, lab testing on mice nuns who study animal psychology?! 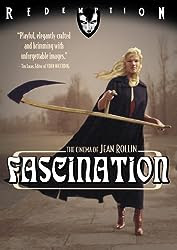 Fascination – Writer and director Jean Rollin (The Nude Vampire) uses eerie zooms and haunting camera speeds to provide wonderful turn of the century style and Old World feelings for this 1979 French saucy. Phonographs and period music, ominous sounds, flowing white frocks, frilly lace, feathered hats, graceful mannerisms, candles, decorated interiors, natural visuals, and a great castle locale contrast the morbid slaughter house, vivid red colors, blood, rogue, symbolic lips, scythes, black robes, and blonde/brunette or good girl/bad girl expectations. Talk about a sexy grim reaper! It does help to know your français, sure, but the fine performances and talk of death taking the form of seduction add extra panache and gothic allure even amid any translation discrepancies on the available English subtitles. The laid back mood may be tough for modern American audiences, but the curious characters and simmering atmosphere is soon set with crimes, betrayal, and a siege situation – not to mention how the boobs are out early and often. We’re immediately intrigued in how one man is going to survive being locked in a house with blonde Brigitte Lahaie (I as in Icarus) and brunette Franca Mai (Zig Zag Story), let alone five more cultish women and a blindfold! Though there’s a lot of skin and tender kissing, the saucy scenes may also be a whole lot of nothing for those who are expecting more full on porn. This pretty Victorian via seventies French lesbianism won’t be for everyone but the kinky sucks the viewer in for the disturbingly delightful fashions, sinister switch, and sophisticated chic. 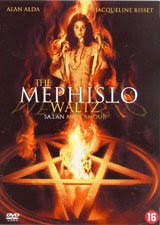 The Mephisto Waltz – Demonic Bond on acid opening credits set the mood for this 1971 simmering satanic thriller along with sweet cars, fancy décor, statues, and of course, creepy uses of the titular Litsz from composer Jerry Goldsmith (The Omen). Although one should probably appreciate classical music before watching, the diabolic orchestration accents the twisted relationships, foreboding zooms, askew angles, and macabre mid century masks. Enough smoke and nudity suggest more while strategic shadows and gauzy glows add dimension to hazy dream sequences. Set off the deadly rituals and eerie funeral with morbid French texts, and it’s easy to root for Jacqueline Bisset (Day for Night) and her understandably suspicious anchor against the decadently posh Curd Jurgens (The Spy Who Loved Me) and Barbara Parkins (Peyton Place). Alan Alda (M*A*S*H), however, is unfortunately too limp in his quest for high art and evil society. He doesn’t show the madness or range needed nor even any maniacal piano playing – he’s plastered for a face cast in one scene and his presence remains the same! Wise viewers or readers of the source novel may expect what happens – there’s an obligatory old-time library research montage, too – but the immoral isn’t always so apparent. Considering its title and subject, perhaps this isn’t as depraved or shocking as other occult pictures of the era, either. Despite some head scratching motivations or plot holes, the scary pacing, freaky drama, and sometimes unexpected turn of events give the audience a few good shocks and mysteries indeed. 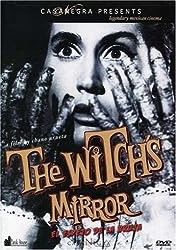 The Witch’s Mirror – Oft spooky actor Abel Salazar (The Curse of the Crying Woman) produced this black and white 1962 Mexican horror treat with Isabela Corona (A Man of Principle) as a creepy housekeeper amid the excellent smoke and mirrors and titular visual effects. From a macabre prologue and illustrations to Victorian mood, candles, and rituals, El Espejo de la Bruja has it all – love triangles, jerky husbands, revenge, betrayals, grave robbing, and ghoulish medicine. The plot is at once standard yet also nonsensical thanks to all the sorcery, implausible surgeries, ghosts, fire, even catalepsy all building in over the top, soap opera-esque twists. The sets are perhaps simplistic or small scale with only interior filming, but this scary, play-like atmosphere is enough thanks to wonderful shadows, gothic décor, and freaky, sinister music. Several language and subtitle options are available along with the feature and commentary on the DVD as well – not that any of the dubbing, subtitles, or original Spanish completely matches. The audio is also messed up in some spots, but the script is fun and full of cultish summonings and medical fantasies. Maybe this one will have too much happening for some viewers, as every horror treatise is thrown at the screen here. However, this is a swift, entertaining 75 minutes nonetheless and it doesn’t let up until the end.

Posted by Kristin Battestella at 1:40 AM