Uno, dos, tres – we are rounding up another batch of saucy and classic vampire delights to whet your appetite! 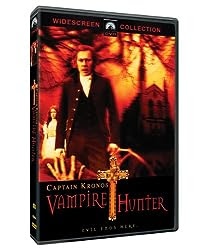 Captain Kronos Vampire Hunter – The titular Horst Janson (Murphy’s War) certainly looks suave in his period frocks and frills for this 1972 later day Hammer romp co-starring Caroline Munro (The Spy Who Loved Me). Though perhaps tame compared to its vampire film compatriots, writer and director Brian Clemens (The Avengers) provides a nonetheless edgy mythos with anti-vamp forged swords, hints of blood, bats, creepy mirrors, a whiff of nudity, kinky innuendo, hypnosis, swordfights, horses, and dark, hooded figures running amok in the idyllic countryside. Sweeping music or silent approaches accent the religious and righteous suggestions, and the vampire mystery and family intrigue remain unique thanks to a Scarlet Pimpernel–esque twist and a fun, hunchbacked John Cater (The Duchess of Duke Street) sidekick. Some modern viewers may find the vampire revelation obvious or the opening to slow to get rolling. However, the moody moments and supernatural atmosphere make for a few intense scenes, and some running dry wit adds brevity along with a surprise or two. Astute Hammer fans may also notice a Karstein connection, and I wish a Kronos series would have continued as planned. Why wasn’t this the successful outing needed to save Hammer Films? A bigger name star may be lacking, perhaps someone like Michael York would have brought a cashing in wink or zing. However, Kronos is meant to be a somewhat unlikable anti-hero, and his tormented hunting style feels like a precursor to some of the darker vampire fighters to come. Ironically, studios today would milk a property like this dry. C’est la vie.

Dracula – Many others have already written about this 1931 classic – myself included briefly here. However, I simply must take a moment to talk about the superior blu-ray restoration of Tod Browning’s widow’s peak trendsetter now preserved in the Universal Classic Monsters: The Essential Collection. What’s this, no jumping print, damaged frames, hissing noise, or flat, barely visible dark scenery the likes of a worn VHS? The black and white photography is crisp, the sound smooth – even soft focus up close shots and foggy, hazy forests look of depth. Background matte paintings blend seamlessly along with decrepit castle cobwebs, coffin-laden basements, and silver screen candlelight. All the smoke and mirrors classic effects have been dusted off and shined anew here, and Bela’s hypnotic eyes have never looked so good along side the polished Demeter footage, and well dressed stage interiors. Yes, the bobs and women’s frocks are more twenties that Victorian, but the atmosphere is nonetheless period gothic effective. Zooms, decadence, and the decrepit are still captivating thanks to this revitalized distinction and dimension. In addition to commentaries, alternate scores, trivia, and more than an hour of behind the scenes featurettes, once again, blu-ray makes the vintage vogue, and longtime fans should upgrade ASAP. 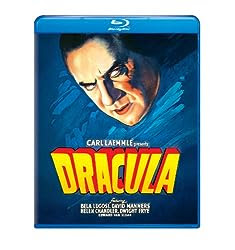 Dracula (Spanish Version) – Luckily, one of the features accompanying the Bela Lugosi essential on blu-ray is this once lost and found 1931 Spanish edition. The introduction from star Lupita Tavar sheds light on this brief, early talkie trend of producing foreign language movies during the off hours of the English filmmaking using the same script, sets, and designs. The result certainly looks crisp in high definition yet it’s quite bizarre to watch two such similar films – those lookalike opening carriage scenes and some word for word exchanges accentuate the eerie mood and gothic feeling. Extra smoke, cobwebs, spooky sound effects, and music also add more flair than its sire, and though still stage like in its presentation, there’s more camera movement, risks with cinematic design, and smart shadow usage. Carlos Villar, however, takes getting used to as the titular conde thanks to his near comical London After Midnight expressions amid the otherwise serious cast. While not Lugosi, Villar benefits from the flashy filmmaking and stays creepy with more up close shots and spooky zooms. This Dracula is not suave but intentionally stilted like a corpse and more ogle predatory. Pablo Alvarez Rubio as Renfield, fortunately, is much more subdued in his maniacal, and the anachronistically divine silks, scandalous furs, and seductive frills keep the ladies saucy. Indeed, this edition feels more about the frightful ensemble and their explaining dialogue rather than the vamp himself. We look at this production in comparison to its English neighbor, but it truly comes together as an entirely separate film. Hopefully more Dracula and vampire fans will see and study this edition now – movie scholars can have a glorious time with scene by scene comparisons and analysis! 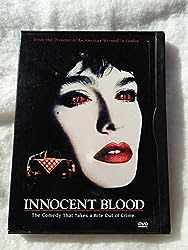 Innocent Blood – Netflix very long waited the full screen DVD of this 1992 mob meets vampires thriller – there are no subtitles, it wouldn’t play in our PS3, and the violent action sounds are ridiculously loud compared to soft-spoken dialogue. Not to mention most of the picture is too damn dark to see all the city smoke, candles, old time noir ambiance, and nudity. Suffice to say, this movie totally needs a proper video release! Thankfully, the cast – including Robert Loggia (Necessary Roughness), Anthony LaPaglia (Without a Trace), Angela Bassett (Strange Days), Chazz Palminteri (A Bronx Tale), Luiz Guzman (Boogie Nights), and Don Rickles (Casino) – is having a good time with director John Landis (An American Werewolf in London) and this tongue in cheek atmosphere accented by swanky Sinatra tunes. Anne Parillaud’s (Nikita) French accent will be tough for some but her unconventional sensuality does wonders. Her opening narration isn’t really necessary, but she’s a vamp in both senses of the word, subtle and unassuming yet deadly and over the top. Sassy Italian elements also provide a mid century gangster feeling – there are classic horror movies on the boob tube TVs, too – and Loggia is totally having a good time with this eccentric mash up. Word to the skinny dames out there, “A little meat on the bones never goes out of style!” Snappy dialogue, colorful metaphors, and badass quips contrast the red eyes, bloody feedings, and one gory but hysterical morgue. The intersecting crime, cops, and chicks add complexity amid the comedic moments and humorous circumstances, and I don’t know why audiences don’t like the camp horror blend of this picture more, as it’s done much better than today’s attempts. Some horror fans may not like the intrusion of crime plots and action fans may not like the vampire contrivances, but this deserves a look for its uniqueness and winking good time.

Posted by Kristin Battestella at 3:57 AM