Well I suppose we can’t watch horror all the time, so this is the next best thing – a whiff of askew non-fiction, horror informatives, and otherwise macabre programming to tide over our terrible little minds.

Biography: Stephen King – This 2000 television hour chronicling the best selling horror author details his quiet, poor early life in Maine, the abandonment of his father, awkward school years, and his initial love of reading, making primitive newsletters, and adoring horror movies. Although fans of the man himself probably feel this profile could have been longer – heck, just a full forty-five minutes of talking to King would be delightful – anyone who has delusions of grandeur about being an author can learn something here. Interviews with King, his wife Tabitha, and other family and friends keep the presentation from getting into the entertainment hyperbole style that so many of the more recent Biography episodes unfortunately offer – however some of the New England accents might be amusing or tough to distinguish for broader viewers. Thankfully, the natural, honest conversations and smooth narration focus on King’s efforts as a struggling young writer and family man, and it’s refreshing to see these behind the scenes difficulties discussed so candidly by the man we so often raise as the twisted and macabre industry standard. Newer King readers can have a thoughtful, pensive introduction here along with longtime horror audiences interested in the spooky King craft. 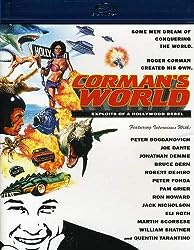 Corman’s World: Exploits of a Hollywood Rebel – “By mistake he made a good picture every once in awhile,” a tearful Jack Nicholson sums up the campy but beloved tone of this 90 minutes plus with extras spotlight on Roger Corman featuring interviews with Martin Scorsese, Robert DeNiro, Ron Howard, Dick Miller, Joe Dante, Bruce Dern, Peter Fonda, Pam Grier, William Shatner, brother Gene Corman, and many more. Frank conversations on the cheap, trashy, tastelessness of Corman’s low budget style are counterbalanced with insights from the unassuming gentleman himself, and time is well spent on his early Hollywood dissatisfaction before becoming a one man movie making team for American International Pictures. Interesting retrospectives on the current outrageous blockbuster obsession and Corman’s under appreciated legacy also harken back to then radical perspectives about leaving the Golden Age studio system to develop the new wave of teen cinema and social commentaries thru lesser known, controversial work such as The Intruder and favorites like Easy Rider. There’s not a major horror focus here beyond mentions of the offbeat A Bucket of Blood and The Little Shop of Horrors or House of Usher and the success of the Price and Poe cycle, and exploitation film clips, language, nudity, gore, and LSD talk make this tough for a classroom viewing. Sadly, the references and politics of the time may also not be fully understood by today’s younger audience. However, film school aficionados and cult geeks will love seeing how many Hollywood stars and styles have a Corman independent film touch.

The Frankenstein Files: How Hollywood Created a Monster – Found on the 1931 Frankenstein video releases, this bemusing and self-referential 45 minutes begins with the Mary Shelley source and continues with the still standing film iconography. Interviews with Sara Karloff, film historians, and modern filmmakers discuss the early stage presentations, make up designs, difficulties in going from page to screen, and the long lasting sympathy of the monster and his childlike innocence. These scholars, family, and film friends have a lot to say and the presentation may seem too fast paced or all over the place to some – a little bit of everything including German expressionism, James Whale influences, clips from Gods and Monsters, Dwight Frye typecasting, and Karloff opinions is covered in the time here. Most of the time is also spent on the first Universal film before touching on Bride of Frankenstein and other sequels, the monster mash ups films, and Hammer retellings in the final ten minutes, but increasing plot implausibilities and film flaws are also frankly discussed. A lot of the material is second hand reminiscing, too. However, the anecdotes will be charming for horror fans and classic film lovers alike.

The Road to Dracula – The recently late Dracula co-star Carla Laemmle – niece of Universal head Carl Laemmle – hosts this half hour look at the Stoker phenomenon’s rise from page to screen. Film historians, museum curators, and interviews with Clive Barker, Bela Lugosi Jr, and Dwight Frye’s son anchor comparisons to the 1931 Spanish version of Dracula and clips of the Universal 1979 adaptation. Laemmle’s narration is understandably a bit wobbly and sprinkled with a few old lady saucy quips, but the wealth of insights shared is too much fun for a horror enthusiast. The discussion could certainly have been longer as well, with an all encompassing look at Dracula films and adaptations, but talk on Stoker’s genesis, silent film interpretations, Lugosi casting gold, and long lasting capes and widow’s peaks setting the vampire standards are more than enough to chew on here. Intimate, nostalgic insights accentuate the behind the scenes points, making this retrospective perfect for the classroom and horror or classic movie buffs.

Posted by Kristin Battestella at 2:11 AM