Bela and Boris and Lon and John

Well it’s no Bob & Carol & Ted & Alice. However, what horror fan doesn’t want a night in with any of these terrifically terrifying gents? 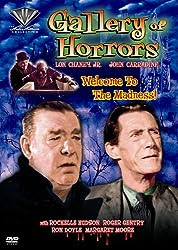 Gallery of Horrors – It’s known by numerous titles and there are certainly better anthologies, but host John Carradine classes up “The Witch’s Clock,” the first tale in this 1967 amalgam. Colorful mists and ominous music over the opening credits set the mood along with old décor, cobwebs, and typewriters, but the low budget production shows in the hasty editing, rushed plots, and cliché spooky double talk. This hokey scripting and telling instead of showing doesn’t help the mostly wooden second tier cast either, and the period “King Vampire” story serves up commonplace crime theories instead of capitalizing on its small town suspicion and hysteria. “Monster Raid” also goes for a nonsensical over the top narration instead of its intriguing mad scientist experiments, but Lon Chaney Jr. gets his Dr. Frankenstein on in “Spark of Life.” Despite heavy possibilities, fun performances, and an intriguing one room laboratory setting, this leg moves entirely too fast. I’d love to have seen Our Man Creighton tackle this in his prime! The fifth and final “Alucard” tale has better scripting and delivery, and the twist makes up for any confusing action. The film as a whole isn’t bad – in fact, it can be fun to spot the reused backgrounds and footage from the Corman/Poe cycle films in some sort of mash up drinking game. However, the video is dark and tough to see at times with some innate flaws, and the fast, harmless fun feels designed for juveniles or short attention spans. Maybe that wasn’t the intention at the time, but the none too scary, moody, and atmospheric fun is perfect for a kid’s sleepover or family movie night. 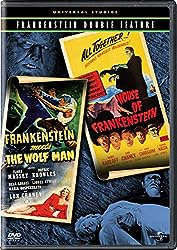 House of Frankenstein – Before House of Dracula (already reviewed here), sad wolfy Lon Chaney Jr., slick wannabe mad scientist Boris Karloff, and seductive vamp John Carradine ganged up for this 1944 70 minutes along with Universal horror company hunchback J. Carrol Naish, carnival showman George Zucco, and inspector Lionel Atwill. Yes, there are loose connections to the titular tellings – a brother who was supposedly an assistant in the monster raising – and even more timeline questions and canon fodder from Frankenstein meets the Wolfman. However, great lightning, storms, prison escapes, macabre atmosphere, shadows, and fun plot twists keep up the intensity. All these monsters somehow afoot on the continent! Though hokey at times today, the moody sets, contemporary dressings, carriage chases, ice caverns, and neat effects for Dracula’s resurrection, trick rings, and bats must have been wartime wild to see. The whiff of romances and young couples are dated as well, and Anne Gwynne (The Black Cat) is more fun under Dracula’s brief spell. Some of this monster action feels like mini vignettes moving from one spooky segment to the next rather than concurrent interwoven plots, but everyone has his scene of ominous and there’s plenty of conflict for this Universal monster road trip. Longtime fans can wing it with the rally fun, but younger audiences interested in classic horror might find this to be a bemusing starter piece, too. 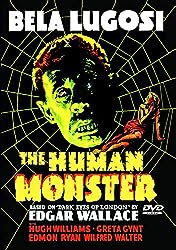 The Human Monster –A poor print, primitive video release, and woeful audio mar this 1939 75 minutes also called The Dark Eyes of London. It’s tough to tell what’s happening at times, and the usual cop colloquialisms litter the plodding pace along with unnecessary transitions featuring people walking to and fro or telephoning up for tea. Fortunately, Bela Lugosi is looking suave in a pre-war stylish suit and belying his nefarious doctoring swindles. His switcharoo subtlety between a generous façade and the slick power of suggestion is disturbingly entertaining. Though the creepy organ music and destitute conditions add to the eerie portrayal of the blind, there’s isn’t a lot of macabre or enough Bela onscreen – most of the focus is on the generic cops and their one step behind antics or the amiss humor. Screaming damsels in straight jackets and the shootout finale, however, make up for some of the obvious crimes. And did I mention the fashion nostalgia and spinning newspaper montage? Today’s audiences won’t find this one that scary and a proper restoration would do wonders, but Lugosi fans can enjoy this fun in a marathon with other lesser known Bela treats. 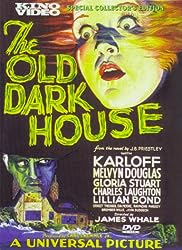 The Old Dark House – Bride of Frankenstein director James Whale opens this 1932 70 minutes with a bemusing Karloff disclaimer insisting that this is the same versatile actor from Frankenstein before serving up Oscar nominee Gloria Stuart (Titanic), winners Melvin Douglas (Hud) and Charles Laughton (The Private Life of Henry VIII), and more over the top character archetypes and cliché family crazy. Yes, Douglas’ playboy hero is too flippant to start, the of the time delivery is a bit much, and some of the song and dance mannerisms, humor, and Jazz Age attitudes won’t be appreciated by today’s viewers. I wouldn’t call this a black comedy per se either, but the self-aware wit is wonderfully conscious of the contrived circumstances, each one thing after another situation, and every suspense increasing psychotic family member. That lovely roadster and more vintage style anchor the firelight, shadowy reflections, and dark framing – this is a well-filmed picture with no hokey stunts or action speed. Thunder, lightning, rumbling mudslides, and a creepy Welsh manor match the off kilter camerawork, shock moments, and near brow beating harshness of the titular owners. There are only a few sets, but the stage-like atmosphere builds its mood through character reveals. While it may be tough to hear or understand without subtitles, interesting personal dialogue, awkward interwar conversations, and religious arguments add intellectual substance to the family secrets and romantic tiffs. Expected Whale suggestions and a whiff of scandalous pre-code lingerie add some juicy, too – not to mention our simpleton but drunk, touchy, and menacing butler Karloff! Despite a somewhat quick resolution and a few innate flaws in this once lost film, the surprisingly fun but creepy old age make up, unexpected twists, and horror smarts hold up delightfully for today’s gothic thriller audiences.

Karloff: The Gentle Monster – This 2006 38 minute documentary is not the hour long Biography episode of the same name but rather a lovely little retrospective found on the Frankenstein blu-ray releases. Although the beginning briefly mentions Karloff’s pre-Universal film appearances, the focus here is with the subtle, silent sympathy of Karloff’s monstrous characters and his long lasting horror appeal. From Frankenstein to later stage work beyond horror such as Arsenic and Old Lace, film scholars and historians discuss early comparisons to Lon Chaney, difficulties with horror make up’s infancy, and more scary film glory with classics such as The Mummy and The Black Cat. Attention is given to Karloff’s quiet success as a character actor thanks to his physicality and ability to be both frightening and sensual at the same time along with his spooky television series and his tireless work across mediums and generations. This is the voice of How the Grinch Stole Christmas, people! It’s also interesting to see movie buffs theorizing on the over reaching and decreasing quality of the studio’s Frankenstein series, beating it into the ground as the franchises, sequels, and remakes do today. Boris fans and horror lovers can eat up the clips and nostalgia here, for sure.

Lugosi: The Dark Prince – Like Karloff, Bela Lugosi’s early life and acting career before Dracula go unnoticed in this 36 minute documentary accompanying the 1931 Dracula blu-ray video. Interviews with genre directors Joe Dante, Jimmy Sangster, and other film scholars and authors instead spend the majority of time here on Lugosi’s quintessential appearance in the budding horror cinema and discuss how his phonetic learning of lines accentuated his hypnotic, handsome, somewhat scandalous and always sensual acting style. This masterful paranormal charisma of course unfortunately typecast him, but clips and analysis on Murders in the Rue Morgue, White Zombie, Son of Frankenstein, and The Raven will be a treat for those interested in the irony of Lugosi’s long lasting iconography but relatively short-lived success and underatedness as an actor. Even if the talk isn’t about the man’s personal life per se, there are great insights into the craft here, making for a lovely little bittersweet study on the quick rise and fall of a horror icon.

Posted by Kristin Battestella at 2:33 AM