Another night, another quartet featuring a variety of bloodsucking delights past and present! 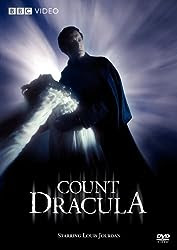 Count Dracula – This 1977 BBC adaptation starring Louis Jourdan (Gigi) as the oft-adapted eponymous vamp bills itself as “A gothic romance based on Bram Stoker’s Dracula.” There are noticeable changes, namely of Lucy and Mina as sisters and the combination character of Quincy P. Holmwood, however this longer two and a half hour episodic format begins with a bright and sunny Harker departure before spending more time with his Transylvania imprisonment than other film versions. The fashions feel a bit later, more Edwardian than the 1897 setting suggests but more dialogue from the book adds to the dark castle, spooky stonework, and moody tone along with creepy carriages, candles, Dictaphones, and fog. Frank Finlay (The Pianist) has the traditional sound and perfect style befitting as Van Helsing, but Jordan’s posh accent and echoing hypnotic sounds take some adjustment. While his freaky nails, hairy palms, and hint of fangs suggest something more sinister, his good looks, suave delivery, and fully clothed vampire brides feel too tame compared to then scarier vampires or, dare I say it, passé to fans of the millennial glitter vamp trends. Fortunately, the play like presentation and television filming of the time allow the story to take center stage. Though jarring at first, the reverse coloring, red distortions, and negative effects used are both crappy and psychedelic try hard cheap and strangely effective. The music is very minimal and the Demeter scenes are neutered to a mere mention over tea, but we do see Dracula walking down his castle wall. Creepy coffins, cemetery locales, bloody trickles around the mouth, and quality if hokey stakings with plenty of splatter keep up the atmosphere against the small scale design. Horse chases and action confrontations also escalate for final half hour, negating any of today’s slow or lacking saucy perceptions. This is a bit too long for the classroom in its entirety, however the mild tone and overall book faithfulness is perfect for showing and discussing selections of scenes not often found in the standard Dracula tellings, and Stoker enthusiasts will find this quite fun to see. 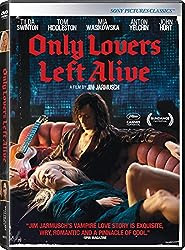 Only Lovers Left Alive – I confess, I’d never actually seen a Tom Hiddleston (The Avengers) movie before this unconventional 2013 vampire tale from writer and director Jim Jarmusch (Night on Earth) co-starring the always ethereal Tilda Swinton (Michael Clayton). The intercut beginning – who is who, what’s happening, why they live apart – will confuse some, but secretive, spooky blue tones and soft, exotic yellow hues distinguish locales and feelings. These colors may seem too saturated or overly processed and deliberately dream like or off kilter and the brief CGI equals super speed actions are too noticeable. However, slowly spinning and descending camera angles and layers of décor create a cool, aged feeling and psychedelic mood along with great locations and sweet records. They aren’t pretty per se but these vamps looks like the old collectors we expect them to be, both of this time with modern technology yet accumulating piles of books and clutter. Their vampire nature is never out rightly stated and isn’t revealed until a half hour into the film with a ritualistic, sex scene-esque, ecstatic blood drinking high. There are dark, spooky moments, but the allure here is in the witty, mature script and sardonic but reflective banter between the ensemble. Hiddleston’s Adam is a moody musical fellow who dresses up as “Dr. Faust” to obtain his blood supply, and fun Byronic and historical references balance his pouty along with Swinton’s Eve and her contrasting white hair and Old World happiness. The couple would seem mismatched but her light content and his dark depressing are wonderfully kinetic and sensuous. John Hurt (Alien) is equally charming as Christopher Marlowe and Jeffrey Wright (Casino Royale) amuses as the blood procuring Dr. Watson. Though the silent montages and heady atmosphere fits the tone, this seemingly aimless, desolate Detroit style won’t be for everyone and nothing much happens until the perfectly juvenile and obnoxious Mia Wasikowska (Jane Eyre) enter half way through the 2 hour time. Fortunately, the parallels and social commentary of quality genre fiction are here –these vampires influence art and science and accumulate knowledge while humanity ignores our spark and degrades into the mundane. They must learn how to live and love, too, and you know, handle the 21st century pressures in finding uncontaminated blood!

The Vampire – There’s pointless repeating for an old lady hard of hearing and a typical fifties kid on a bicycle to start this 1957 vampire and science blend, but otherwise the mysterious doctors, animal experiments, spooky house, thunder, and eerie music move swiftly for these 75 minutes. Interesting widower and father/daughter dynamics are introduced quickly and remain believable even while most of the fantastical science and old time doctoring will be shoddy today. Yes, mistaken pills and vampire bats plotting are obvious nowadays and fast talking cops or boring secondary characters are typical – never mind the whole lot of hooey and faux medical babble. However, the fifties over the top and expected horror hysterics are minimal, and a few red herrings add enough intrigue along with this likeable family threatened by naughty control serums and science gone awry. Although the simmering looses some luster once we see the goofy titular make up designs, the black and white shadows, darkness, and mostly off screen violence work wonderfully. There’s a pretty nurse and a whiff of a love triangle, but the romantic subplot is subdued enough and laced within mini suspense moments and crime vignettes. The guilt over these murders, vampire bites, and a deadly blood virus feel quite Jekyll and Hyde in spite of the preposterous science babble. The escalation progresses well, and dare I say it, the addiction parallels, viral paranoia, and suicide talk while not too deep to ruin the mid century fun do seem somewhat modern or ahead of their time. Some surprising turns and an enjoyable action finish round this one out nicely. 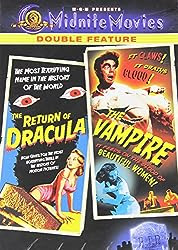 One for the Kids!

The Return of Dracula – A hokey narration catches us up on this 1958 black and white vampire yarn, but it’s a bit odd to hear Transylvania talk alongside sweet classic cars, Leave it to Beaver nostalgia, and you know, Dracula in sunny California. At only 77 minutes, too much time is taken just getting started, and dangerous stakings and fine cemeteries are dismissed for a cliché older mom, teen daughter, and an annoying golly gee kid – heck their last name is Mayberry, coughandygriffithcough. Instead of unnecessary fifties niceties or aimless transitions, the script should be tighter; this mix of young romance, coppers on the case, and would be horror tries to do a bit of everything. The quality eerie parts seem like they are from a different movie thanks to smoke, howling dogs, wolf attacks, scared patients, coffins, and ominous music, and the few and far between supernatural leaves Francis Lederer (The Man I Married) with the bare minimum Dracula to do despite his proper look and pedigree. Fortunately, there are some interesting plot twists – from a sinister mistaken identity and dead cats to an unusual for the time widow and the suspicious male relative upstairs. Old fashioned over the top screamers and story possibilities are here, yet an uneven short sightedness, and trapped, B drive-in style will hamper the viewing for some. While it’s cool to see the mid century fashions, sewing, and décor, such wistful is unatmospheric compared to the spectacle of Hammer’s Horror of Dracula. One smart use of color, however, adds to the period entertainment here. Yes, there’s hardly any vampness per se, but the harmless taking itself seriously tone and obligatory Halloween Costume party finish make this one perfect for today’s spooky juveniles.

Posted by Kristin Battestella at 8:51 PM