Country Scares Round Up! 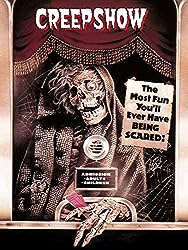 Creepshow – Terror titans George A. Romero (Night of the Living Dead)  and Stephen King (Carrie) present this 1982 anthology featuring a spooky fun cast including Ted Danson (Cheers), Ed Harris (Apollo 13), Leslie Nielson (The Naked Gun), Adrienne Barbeau (Maude), and Hal Holbrook (The Senator). The expected anthology frame blessedly remains as only opening and closing bookends with a few scary winks, letting the animated transitions, red and blue lighting, and comic book styled backgrounds or cell frame designs accent the scary and carry the pulp homage. While some nods are too obviously placed or too humorous for some, the lighthearted, almost camp and endearing at times tone is in keeping with the creators’ nostalgic Tales from the Crypt creepy of yore feeling. The first “Father’s Day” tale is a little short but has a now dated kitsch and gruesomely bemusing result. “The Lonesome Death of Jordy Verrill,” however, is kind of dead end. It’s surprising that Stephen King can act as the stupid hick so well, but a vegetation meteor run rampant doesn’t have that much impact – no pun intended. Fortunately, the lengthy “Something to Tide You Over” provides pretty but deadly beachy with vengeful tides and a quality, watery comeuppance. “The Crate” has some obnoxiously fun performances to match its hokey, inexplicable monster, and the final “They’re Creeping Up on You” is surely not for people who dislike bugs, namely cockroaches. Lots of cockroaches – many, many cockroaches everywhere! Certainly this can be uneven in scares and brevity as anthologies often are, but all in all, there’s a good, macabre ride here.

Deranged – You’ll never look at Home Alone the same way again after seeing Roberts Blossom in this 1974 AIP slasher! Deaths simmer thanks to fine build ups, suspense, and pursuits – not to mention the gross necrophilia possibilities, skin wearing, morbid transvestite extremes, human bones about the house, and au naturel instruments adding to the macabre ambiance. The sense of dementia, local language, warped small town unassuming, and backwoods suggestion create an ironic old time quaint, accented by bent organ music and askew religious views. Corny narrator Leslie Carlson (Black Christmas) appears in early scenes as an onscreen reporter recounting the Ed Gein true story genesis, but the fourth wall breaks smartly disappear as the second half escalates. Brief nudity and lingerie work with the appropriately dark humor as well while over the top quips, chubby women, fake séances, and bungling sex innuendo match the sinister planning and delicate but twisted craftsmanship. The acting and cast may not be in everyone’s style today, yet the performances fit the material and tone perfectly. Thanks to the sense of past isolation for contemporary audiences, the very effective mood, atmosphere, and disturbia here has aged fairly well, making this one a must see study for horror fans or criminal and psychology scholars in comparison to other Gein inspired pictures.

Motel Hell – You just know what the secret ingredient is in this 1980 country cannibal thriller! Ironic use of hillbilly music and television evangelist Wolfman Jack contribute to the charming and quaint but disturbed feeling here – the mix of late seventies styles and early farmhouse contentment doesn’t seem dated at all. Hanging pigs and slaughterhouse gore aren’t too over the top, but enough bloody suggestion and touches of nudity and kinky accent the dark humor and bizarre yet sentimental familial relationships. Rory Calhoun (How to Marry a Millionaire) has some sick and disturbing fun here yet remains strangely endearing, heck, even likeable. Vincent Smith’s reducing the riff raff population and keeping the community fed – it all seems like a real win win, and the winking tone pokes fun at this irony without being laugh out loud. The audience can chuckle at the soothing New Age eight track music amid the escalating events and interfering romance. Who’s next? When will the good guys find out? The pig mask and chainsaw duel in the finale are stupid and not scary now, hampering the otherwise bemusing wit and multi layered action. However, all in all this is some down home simmering and well done entertainment. 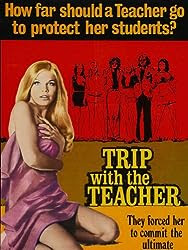 Trip with the Teacher – A faded picture, bad seventies styles, bug eye goggles, and tacky music are the least of this 1975 short bus desert escapade gone awry’s problems. The biker badass never comes thanks to brothers just playing at punks and terrorizing women while other characters remain stupid via poor scripting and acting. The rape revenge terror nasty has been done better elsewhere, and the time here aimlessly escalates the violence as it somehow also remains too tame – PG-13 brief nudity and the inability to say dirty words despite such heavy subject matter. We never find out why the perpetrators have such a ‘tude; the teen girls look way too old to not suspect what these jerks want to do to them and thus they remain reactive instead of forward thinking. The skimpy hot pants and catfights may be enough for some viewers along with the innate lecherous and natural isolation, but nothing is done with either. Some bike chases up the ante, but unclear motivations hamper any endearment for the victim or fear of the villain. Are we supposed to care about the bad guy’s malfunction? Sexual violence suggestions should be scary enough, but such implications feel cheap and the revenge empowerment nonexistent – four women can’t subdue one unarmed drunk guy? Everybody watches but no one does anything until a heroic man arrives? Even the end credits have scenes of each player with the women receiving credit over their most degrading shots while the guys have cool smiling stills. Wtf? The possibilities for silent, sinister isolation are lost in weird, artsy, and time wasting clichés here. Yes, walk passed that fully functioning motorcycle as you run into the desert for help!

Posted by Kristin Battestella at 12:08 AM