Long famous for their horror films, Hammer branched into television for the 1980 anthology Hammer House of Horror. Though short lived, this quick dose of frightful holds up nicely. 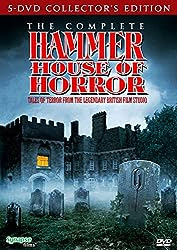 “Witching Time” starts Disc 1 of the five disc DVD set with period candlelight design, fun film within a film scandals, adultery, and nudity in expected Hammer film fashion. Spooked animals and power outages add atmosphere before the titular witches run amok. Sure the acting is a bit over the top, but this is a morbid mix of hex meets eighties naughty and jealous fantastics that keeps up the twists throughout. “Thirteenth Reunion” adds driving scares, hysterics, and a sardonic awareness of the scary as the hour touches upon women’s rights, weight loss, fat shaming, and sexism. The investigative angles and mystery unravel nicely, and a ghoulish suspense leads to some wild realizations. Denholm Elliott (Raiders of the Lost Ark) stops by Hammer House of Horror next for “Rude Awakening” and its creepy realty, pleasing confusion, eerie fortellings, and circular build up escalate the tension for some great toppers.

Disc 2 continues the scary quality with laboratories and one creepy kid I’d take right back to the orphanage in “Growing Pains.” Though the dead rabbits, dogs gone wild, and LSD shenanigans are not for the faint, there’s an interesting blend of technical talk, parental relationships, and ghostly vengeance. Is this bad science or a more sinister spiritual commentary at work? “The House That Bled to Death” has a moody silent start to establish its macabre, murderous elderly and suspicious realty ala Amityville along with disturbing kid’s parties, some kinky, and judgmental neighbors – I don’t want to say much more. Fine cinematic development raises these horrible happenings, and ahem, cat lovers beware! It’s slow to start, but freaky masks, voodoo spins, and African art contribute to the financial and business pressures, wills, and motives in “Charlie Boy” – not to mention that eponymous, shudder inducing doll. It’s also interesting to see a then-taboo interracial couple dealing with the intercutting crimes, and there’s a good variety of accidents and deaths. The desperation mounts as the murderous thoughts come to fruition. One can’t pick and choose the victims, yet it’s so easy to lose control.

Hammer House of Horror peaks with “The Silent Scream,” starring Peter Cushing, Brian Cox (Troy), wild cats in cages, electricity experiments, past injustices, and natural fears of confinement. While Cushing seems so well intentioned and charming as always, there’s something fishy afoot. Difficulties in readjusting to life on the outside and concentration camp consequences blend wonderfully with the trapped feelings, horror bizarre, disturbing Pavlov’s dog elements, cover your eyes intensity, and unexpected twists. Where is the line between humans and animals? What will we sacrifice under the pressures of confinement? “Children of the Full Moon” handles more traditional fair with kids gone wolfy, stranded honeymooners, and a spooky mansion nearby. Unseen camera perspectives and howls set the monster mood as the suspicion and family macabre build for a fun finish. “Carpathian Eagle” is a bit dated and I might have enjoyed seeing the past evil deeds of the countess more – plus, if you blink you’ll miss 007 himself Pierce Brosnan, too. Fortunately, the mix of old time styles and taxidermy accent the bloodthirsty history, saucy, and violence along with amusing wigs, make up, disguises, and serial killer suspense.

The great guests continue on Disc 4 with the occult rituals, eerie mirrors, and demonic symbols in “Guardian of the Abyss.” Maybe its small scale compared to the style we expect in Hammer films, but Blake’s 7’s Paul Darrow makes the moody visual effects and beastly masks even better. It’s Avon gone antiquing, people! John Dee history, Elizabethan relics, and cat and mouse pursuits over the titular demonic raisings top these sinister gents, sacrifices, and foretold twists. Likewise, Blake himself Gareth Thomas and Dark Shadows alum Kathryn Leigh Scott have some scary violence, well done hysterical, and heady camera work in “Visitor from the Grave.” Hinted history and a suspicious domestic design add to the murderous cover up, hauntings, and mental instability. The screaming may be too much, but clues, consequences, and séances make for a wild end. Seemingly family friendly to start, “The Two Faces of Evil” picks up a hitchhiker in a slicker and puts a scary stop to the tranquil with a spooky hospital, mute injuries, and a fearful inability to share what has happened. The gaslighting mounts thanks to distorted camera work and a weird, funhouse feeling. This macabre might be too crazy for some but the stitched together memories and menace win out.

The understandably then too shocking “The Mark of Satan” concludes Hammer House of Horror with operating table intrigue and morgue morbid – all those shrouded bodies about while morticians wax nostalgic on drilling into the skull over quotes of Keats and Shelley! How would one relieve the body of a trapped soul or evil within? Bible research, spooky sunglasses, and eerie repetitions of the number 9 are enough to wig one away from Sudoku while odd jump cuts and transitions add to the disturbed feelings and numerology paranoia. Askew film angles, creepy mothers, murder – I don’t want to say any more! There is too much depraved for sensitive viewers, indeed, but this is a befitting topper to finish the series. Yes, it is a bit unusual to have this one odd episode on the last disc with two brief interviews featuring Kathryn Leigh Scott and Mia Nadasi. Naturally, I would have liked more Hammer history and horror analysis or reflection on the time and retrospective thoughts from experts in spoiled contemporary video fashion. However, merely having this once unreleased episode available with a few perks is delightful enough for the Hammer completist.

Other than knowing this series was made by Hammer and short lived at 13 episodes, I came into viewing Hammer House of Horror relatively unaware – and that’s probably the best way to approach these well done fifty minute eeries. The suspense isn’t stretched thin; remaining well paced and making the macabre feel longer with fully developed cinematic flair across the variously spooky subjects. Though the of the time slang and British accents may be difficult for some audiences without subtitles, the late seventies values, period style, and lovely Hampden locales complete the expected Hammer charm. The per episode introductions on the DVD set also provide some fun background to each tale, including information on the cast and crew or related horror film connections. While some may choose to skip these optional anecdotes in preservation of the plot twists, most are bemusingly spoiler free, and it’s a wonder why more series don’t do this kind of trivia. The teasers to start each hour are likewise quality cliffhangers, and though short, the gothic style credits and opening theme set the Hammer House of Horror mood perfectly. Granted, there is a noticeable over reliance on too many car chases and vehicular perils – most of which are for the sake of the suspense or an easy plot device. With such a short series, detail obsessed viewers will recognize that most of the locations are the same, too. Thankfully, Hammer House of Horror uses this shoestring design to wink at the audience, for it’s as if this same idyllic English countryside is rampant with any and all these creepy happenings.

I wish there was more of the Hammer House of Horror, and this marathon viewing has spoiled me! I want all the great horror anthologies, all on one channel, one right after the other, and give them to me now. For longtime spooky-wise viewers, there may not be enough of the knock your socks off scary spectacle style. Maybe Hammer House of Horror is too dated or obvious and cliché compared to longer lasting compatriot series. Nonetheless, ‘tis a pity that the struggling finances and behind the scenes at Hammer Studios prematurely locked the door on the Hammer House of Horror design, for the mature old time sophistication here remains most definitely atmospheric and sickly entertaining.

Posted by Kristin Battestella at 4:09 AM