These so bad they’re good or just plain peculiar thirty year odd cult faves, obscurities, and oddities are not for everyone, but I’ll be darn if they aren’t bemusingly spooky and family friendly fun!

Blood Song – The second hand transfer is dark and impossible to see at times and the musical interludes for this 1982 Frankie Avalon slice and dice tale are iffy. The flashback explanations also should have happened sooner instead of falling into cliché harsh parents, teen angst, one step behind cops, and misogynistic boyfriends. Though he’s always suave and it would have been neat to see him against Beach Party type more, Avalon’s juvenile “nobody’s taking my flute away from me!” crazy is a little too hokey to enjoy. Fortunately, the odd music motifs, sincere ensemble, fifties murder/suicide, and old-fashioned feelings layer the plot – and I do genuinely love all the wood paneling! Despite goofy graphic transitions and thinly tied blood donor connections, the eerie hospital escapes and dreams blending with reality remain interesting. No one believing the young protagonist and treating her as if it’s no big deal also feels like an ironic mixing of precursor Halloween –about a vengeful escapee stalking a teen girl – and the subsequent Nightmare on Elm Street – where dreams connect a killer to his next lady victim. Well shot murders, good blood, unique camera design, and a whiff of nudity all do what they are supposed to do while we wait for the inevitable one on one encounters. Viewers can take the good here or enjoy the bemusement. After all, how can an able bodied man not catch up to the falling young girl with a leg injury?

Little Shop of Horrors – Yes, the not horror per se musical song and dance designs of this 1986 stage to screen adaptation will upset hardcore scary fans. Some vocals, voices, and songs will grate on viewers’ ears while dated, cardboard looking, downtrodden set styles and plant puppetry effects will be intolerable to audiences expecting a production with more panache – be it paranormal or musical. What is intended as would be scary, ominous, or sinister in the deadly plant sequences is perhaps ruined by the sing a longs, taking the frightful and humorous to extremes from one minute to the next. Thankfully, there is a welcome nostalgia captured here for fans that appreciate both old time musicals and all in good fun sixties scares. Although they probably won’t realize all the subtitles and mid century innuendo, kids can enjoy the affectionate parody at face value through the smart period looks and charming music sounds of the past. Bemusing cameos and performances by Rick Moranis (Honey, I Shrunk the Kids), James Belushi (According to Jim), and John Candy (Who’s Harry Crumb?) put the final bells and whistles into place. My favorite part, however, and one that might be too frightening for the little ones, is Bill Murray (Ghostbusters) as a patient who gets off on receiving the dentistry horrors more the than Elvis gone bad Steve Martin (Roxanne) who gets off on causing such sadistic dental pain. Indeed, this largely sentimental before scary ode isn’t for everyone, but it is directed by Frank Oz aka Yoda, so what did you expect? 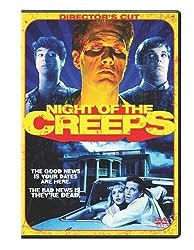 Night of the Creeps – A hysterical mini alien shootout – complete with Star Wars jettisons and spacey subtitles – starts this 1986 zombie coed funfest before continuing with a nostalgic, black and white fifties wink. Cool cars, excellent classic radio, and period dames build a sinister atmosphere before moving on to the then-contemporary rad, neon, and shoulder pads. There will be too many try hard, lame-o nerds in love quips for some today, but it’s easy to accept the eighties-ness and the quality if cliché sacrificial, sub textual best friend thanks to bumbling cops, grumpy detectives, and bathroom scares. The freaky circumstances build with ominous intercutting, pleasing creepy crawlies, decrepit zombies, and undead designs. While some characters are better than others – lead Jason Lively (National Lampoon’s European Vacation) being one of the weak points – and foul language and nudity are minimal, the action, expected body count, and sorority shootouts proceed with a ridiculous variety of deaths and absurd fun. Go with it and bring your Aqua Net to the rescue!

Puppet Master – A quirky period opening sets the campy but ominous mood for this 1989 funfest. Add eighties hair and fashions to the seaside hotels, psychics, incense, stuffed dogs, and paranormal gear and plenty of death will follow! The mostly no name cast puts on some bad acting and the puppet effects will be goofy to some, but the peculiar ensemble creates intrigue and this mediums smorgasbord keeps things entertaining – along with these perverted little puppets. Those strong little suckers have some personality! Bemusing puppet perspectives add to the design, and an abstract palette distinguishes the flashbacks and visions as the violent pieces to the puzzle unravel. Some language, nudity, kinky, and sex talk keeps the conversation mature amid otherwise hokey exposition – Egyptian alchemy name dropping yadda yadda – but eerie moments and a shocker or two make up for the nonsensical plot. The approach is dated, even laughable if you think about it too much, but the unintentional humor and the slightly inferior cast are the only flaws here. Purists will have a fit over all the video releases and varying editions and this does remain enjoyable, but still, there are 10 sequels to this movie? Ten?!

Posted by Kristin Battestella at 3:58 PM