I’m not sure what rock you’ve been living under if you haven’t heard any Johnny Mathis Christmas music lately, but the unusual Christmas Is… compilation perfectly fills any gap in your Mathis merriment.

With such a generic title, it’s actually tough to find information regarding the eponymous Christmas Is…, a slightly seventies dated but fitting opener setting the mood for the sentimental, soft sounds here. Carried over from Johnny’s perennial 1958 Merry Christmas album, the unfortunately infrequently heard It Came Upon A Midnight Clear adds a no less stirring lullaby reverence. At the opposite end of the seasonal spectrum, Jingle Bells – borrowed from the 1986 Christmas Eve with Johnny Mathis – delivers some jazzy, ad libbing background singing and layered lyrical fun. It’s a pleasant ditty, but as the most rocking tune on Christmas Is… it’s oddly placed between two somber carols. Ave Maria, the longest track at four and a half minutes, hails from Mathis’ lone 1958 religious album Good Night, Dear Lord. Some of the notes aren’t as big as listeners might expect, but Johnny lingers on the Latin and harkens a smooth, medieval feeling.

Today, you know there would be a dang twitter, tumbler, youtube channel, facebook page, star shaped pretzels, McDonald’s toys, and every other tie-in imaginable to go along with a single like When You Wish Upon a Star. This Disney delight arrives on Christmas Is… from the 1964 The Wonderful World of Make Believe Mathis album, and though at first it may seem like an odd choice for a holiday release, this quiet charmer fits in perfectly with the childish glee of the December toy shenanigans. The more mature Christmas Day repeats from Give Me Your Love for Christmas but Johnny brings on the innocent, reflective melancholy and sappy seasonal memories, quivering over the bittersweetness. Borrowing again from his Merry Christmas session, The First Noel provides more traditional Old World feelings for Christmas Is… with Johnny’s longwinded, digging deep reverence. There doesn’t seem to be much rhyme or reason to the track selection or the set order here, but the equal helpings of spiritual and secular still fit together thanks to Johnny’s classy vocals and suave arrangements. 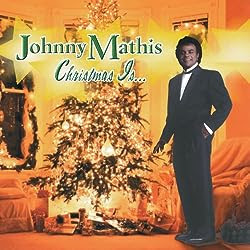 Christmas Is… continues the Reason for the Season theme with Mathis and Gladys Knight’s 1980 duet When a Child is Born. This is a no less respectful song in its story of a peace bringing babe, yet Christ nor Christmas are never actually mentioned in the lyrics. Thanks to the great gospel vocals, however, listeners can still go for this carol per se either way– full of inspirational meaning or as an open global message. God Rest Ye Merry Gentleman, originally from the 1963 Sounds of Christmas along with the titular finale track, takes the ancient veneration further by using less orchestration to accompany the big, extended octaves. The Sounds of Christmas concludes Christmas Is… with more fun, festive, fitting Yule images to match its romantic pop topper. Ooo, how Johnny!

This is, of course, a somewhat recent budget CD release – complete with a totally tacky Photoshop cover – but come on, as if that first Merry Christmas album design with the fake snow and ski gear didn’t set the kitschy holiday bar! Overall, Christmas Is… is probably an uneven set with no method to the ten track order or its inclusion criteria for this short 34 minutes. Why aren’t these tunes in chronological order or paired like spiritual with like holiday pop? Why were elusive seasonal singles packaged with so many album repeats when there are certainly more December rarities? Fortunately, since Mathis is such a maestro of merry, these are all solid sounds for any holiday playlist regardless of any faulty packaging. The odd gems here not so easily found on other Mathis holiday editions or in today’s digital stores make Christmas Is… worth the impulse buy or CD pursuit.

Posted by Kristin Battestella at 11:36 PM