Australian songstress Olivia Newton-John’s 2007 Christmas Wish is a solid hour of familiar seasonal instrumentals and new uplifting merriment. Unfortunately, the safe, syrupy sentiment comes on too thick and hampers what should be a peaceful, inspiring listen.

Rather than an over the top bombastic, Christmas Wish opens with soft notes, expected mellow and breathless reverence for a fine O Come All Ye Faithful full of pleasing humility. We’re knocking on the door, whispering Adeste Fideles, and requesting an audience with the Babe. Angels We Have Heard on High follows, the first of ten so-called interludes between tracks. These instrumental, minute plus transitions are a neat way to keep subtle carol melodies both familiar and rare within the set, and of course, their short treatment makes room for new secular fair such as the Every Time It Snows duet with Jon Secada. His Spanish interweavings add a delightful accent for the rest of the year, but despite holiday lyrics and winter mentions, this romantic ballad doesn’t really have much of a December feeling. 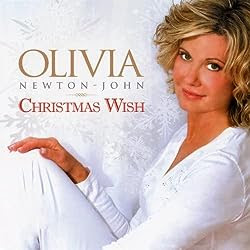 A lovely violin Away in the Manger interlude leads to the somber We Three Kings, complete with room to hold notes for some medieval, mystical oomph before the carols continue thanks to a charming The First Noel snippet. A Mother’s Christmas Wish next adds more seasonal love and spirit by combining familial feelings with a peaceful lesson. As the eponymous track, this might have been meant as Christmas Wish’s big hit ode. However, this tune is instead indicative of the album’s main problem: an overload of similar sentimentality. The less heard Jesu, Joy of Man’s Desiring interlude is prettier than the seemingly try hard, very special songs, but Angels in the Snow repeats more of the tender, touching, universal but generic holiday magic of A Mother’s Christmas Wish. Maybe it takes having kids at Christmas to appreciate these two near identical tracks, but they are simply too much of the same too close together. A listener could step away, miss the interlude, and think the same song was still playing.

A slightly longer guitar What Child is This interlude segues to a wispy Silent Night lullaby with foreign verses from Jann Arden, but the lengthy, full treatment carols also ultimately remain as uninspired as the redundant secular standards on Christmas Wish. The brooding piano moment of O Come, O Come Emmanuel leads to distinctive guest star Michael McDonald and All Through the Night, which is also somehow derivative of the same general holiday malaise of Christmas Wish. For such a super sized Christmas session, this all sounds like one long sleepy set, and ironically, it doesn’t feel like Olivia really sings that much here. Likewise, the instrumental Little Drummer Boy interlude doesn’t standout, either – probably because it is lacking in, you know, the drums.

Fortunately, Underneath the Same Sky wakes Christmas Wish up from the doze fest with some of Olivia’s overdue country upbeat. The Down Under, nostalgic lyrics are fun, the titular sentiment is nice – really it is true whatever you’re celebrating this December. Of course, the only knock here is that this is a sweet tooth on top of an album already serving up too many other saccharine Disney ditties. The interludes change up as well, trading brief carols for old-fashioned traditional flair – although the O Christmas Tree segment is a near unrecognizable tannenbaum. Little Star of Bethlehem also becomes too insipid, running together to the point where you can’t hear its peaceful message. Deck the Halls is the shortest interlude on Christmas Wish, and by this point, these instrumental arrangements become somewhat frustrating, even deceiving because the audience looks at the track listings and expects a complete Christmas session but instead receives a contemporary album that is going for a bare minimum Christian theme and just happens to have a few holiday songs.

This laying it on banal tone overflowing on Christmas Wish is surprising considering Olivia’s other spiritual releases, and Instrument of Peace previously appeared on her Grace and Gratitude Christian album. This should be a powerful, personal, testimonial thanks to some kicked up orchestration not found elsewhere on Christmas Wish, but it’s still too darn slow and jars up against an oddly placed We Wish You a Merry Christmas, which sends the album off with a piano exit two songs early. Mercifully, Christmas on My Radio is one great little number steeped in a fifties via Grease style and reflection. Surely, it is understandable if Olivia is reluctant to revisit what is probably an expected design. However, this is the only time on Christmas Wish that she truly breaks out, kicks it up, and does something fun and – gasp!–different. The lyrics recall and old time Christmas with feel good dancing sway, her voice is great, and I would have loved to hear a shorter album in this style. This is the only song trying not to be the unnecessary global peace and love hit, yet it is the only one perking you up and giving Christmas Wish notice. Barry Manilow joins Olivia and starts A Gift of Love in what could be something special, too, but at two and a half minutes, this encore ends Christmas Wish just when it was getting good.

There’s a lot of new seasonal material on Christmas Wish – this second holiday release from Newton-John is probably trying to stand out from the perhaps bigger carols on her 2000 Tis the Season album with Vince Gill. The guest stars and unique listing here should make Christmas Wish feel like a concert, but the visiting vocalists are hardly there and the orchestration barely flinches for the entire hour. Unlike the all secular and iffy celeb laden kitschy of her later This Christmas set with John Travolta, there’s nothing extreme or all that spectacular about Christmas Wish. It’s a tolerable, pleasant listen for December office background music, but it should be better than it is. With so many similar notes, it’s easy to zone out or find most of the tunes forgettable. I want to like Christmas Wish and am probably being generous in calling it a mixed bag – there will certainly be too much syrupy here for most audiences. Longtime Olivia fans or country and contemporary Christian households, however, can take small doses of the mellow merriment on Christmas Wish for a tame, seasonal playlist.

Posted by Kristin Battestella at 1:01 AM