The budding sciences of the sixties and beyond may seem bemusingly simple to us in the seemingly so sophisticated twenty-first century. However, these mid-century science fiction delights remain classic adventures of space, science, and technology for the whole family. 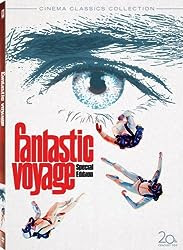 Fantastic Voyage – Stephen Boyd (Ben-Hur), Raquel Welsh (One Million B.C.), and Donald Pleasence (Halloween) take this 1966 microscopic, heart-stopping adventure full of wondrous snap, crackle, pop mid-century science – what could possibly go wrong? The technical talk, quick debriefing, dated military missions, political intrigue, and seemingly aimless golf cart tours through the clean, blue and white streamlined designs are perhaps slow to get going today. Some waxing philosophical or poetic soul and creator versus science talk amid the medical jargon feels like old hat exposition, too. The procedural scenes also seem more like an awe-inspiring museum demonstration, and a crowded inside and too many anonymous, unnecessary people outside at control creates confusion. Fortunately, all this build up smartly puts an unbelievable situation in the realm of the then possible. Although the whole mission seems totally impractical and perhaps causes more damage than the operation at hand, the wild journey along the way forgives the rushed ending or any plausibility issues. The models, miniatures, and visual effects look dandy and remain decidedly charming, and nostalgic body system graphics, paper overlays, and Morse Code add simplicity to the high tech while a real time ticking clock ups the claustrophobic tensions and medical perils. Colorful plasma, bubbles, tubes,and pink pustules bring the titular spectacles to life along with a variety of sounds, laser lights, attacking antibodies, psychedelic mosses and even gross scales. It's an interesting mix of submarine, under the sea currents and exiting outside the airlock space. So what if it's all totally unrealistic – the young at heart and science minded kids can still enjoy the wonderment here. 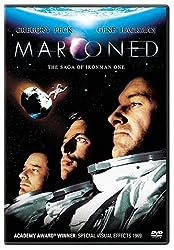 Marooned – Gregory Peck (To Kill a Mockingbird), David Janssen (The Fugitive), James Franciscus (Beneath The Planet of the Apes), Gene Hackman (The French Connection), Richard Crenna (The Real McCoys), and more stars anchor this 1969 NASA nail biter. Real footage from the Apollo heights and of the time mission control look great without the need for abundant CGI and special effects as we know them today. There aren't that many sets either, allowing for tense action at home and claustrophobic capsule hysteria as one thing after another spells disaster – retro rockets malfunctioning, low fuel in orbit, hurricanes over the Cape, daring rescues in experimental craft, and precious, precious oxygen running out. Though slow to start and at times tedious with minuscule, technical details and procedures; a desperate ticking clock, presidential pressure, wives on the ground, and Russian friends or foes add to the peril. Yes, there is an American mid-century gung ho, yet it's somewhat surprising that such a heavy, all things go wrong picture would be made amid all our spaceflight glory. It's also interesting to see how this film has become both inaccurate and prophetic. They were unprepared for this calamity and thought such accidents would doom the space program, but we haven't progressed much further in the decades since – let alone gotten to Mars, which they talk of as an imminent event. Though the finale feels rushed compared to the slow, by the book, space happenings shown along the way, all the intensity of a modern disaster flick is here along with a then impressive realism. No camera tricks, edgy film making, or punched up orchestration is needed to tell the viewer how desperate the situation is, and with these good looks, classy cast, and yell at the TV entertainment, this one shouldn't be as seemingly obscure as it is. 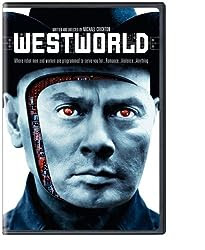 Westworld – Androids run amok in this 1973 sci-fi western written and directed by Michael Jurassic Park Crichton. Granted, the slow explorations of then-futuristic empty white sets and technobabble gibberish feel like filler; once cool computer monitors and pixelated robot viewpoints need updating. The debut direction is also somewhat simplistic, with of the time slow motion violence and aimless running to and fro amid the shootouts, feasting, brothels, and bar fights. Modern viewers will expect a catastrophic resort meltdown to be, you know, catastrophic instead of a straightforward, one on one tame, and despite a great premise, it's tough to overlook the safety ignorance, preposterous logistics, and an abrupt finale. Guns, swords, mechanical malfunctions – the sex robot models are supposed to be totally detailed yet nobody can perfect the android hands? Fortunately, while there's little character development, we know enough to like cool best friend James Brolin (Hotel), fear the gloriously unyielding Terminator before Terminator was Terminator Yul Brynner (The King and I), and feel for divorced if insipid lawyer in need of a vacation Richard Benjamin (Catch-22). The social possibilities are here, too, from an ultimate vacation where man can have his decadent and violent desires to seemingly in control behind the scenes technicians who eat while they watch the depravity unfold. Suspicious nighttime activity resets the excess while guests sleep unaware, but man made machines or machines making androids in the mirror of men will surely misbehave. Sentience among the robots is also suggested – are they fed up with human seductions and taking matters into their own hands for one destructive hurrah before their batteries fail? Medieval games and Roman hedonism aren't fully shown, but for a $1 million odd budget, the colorful designs aren't bad. The Old West facades provide nostalgia to match the amusing saloon times, creating humor and comfort with over the top tropes. Although the theme is under cooked, this still fairly unique genre twister was ahead of its time and remains delightful for young and old seeking western lite or SF perils.

Posted by Kristin Battestella at 1:53 AM