Former boxer Vian (Sean Bean) is released from prison after serving twelve years for killing a man in bar fight. His sister Bethley (Kate Walsh) takes Vian in so long as he doesn't drink, but no one will hire an ex-con and Vian's former gym does not welcome him back to the training circuit. Soon, Vian meets Jolene (Eva Longoria) and gets a humble job at a pizza parlor run by the likewise down on his luck Roland (Tom Arnold). Things are looking up – until another tragedy strikes the family and tests their faith.

By setting the scene with a bar room brawl and cutting to the time served exit without all the in between red tape, writer and director Rustam Brannaman (The Culling) doesn't waste time in this modest slice of life struggle. Ironically, Any Day will be slow for those expecting the oft-seen scandalous drama or heavy hitting biopics, and nothing cinematic major happens amid the predictable accidents and shoehorned in mystical convenience here. Though self aware in having its convict out of touch with modern slang or in desperate need for a date, Any Day meanders with first draft flaws, initially implying Vian's goal is to train and box again before weak antagonism and finally focusing on getting his life back together. Trite twists in the second act almost undo the intriguing, realistic questions not often asked in mainstream cinema. What does it take to be someone and make it in life? What happens when things don't work out the way you plan? What do you do when life gets worse before it gets better? We're figuring out what to do with our baggage and living paycheck to paycheck, too, and that similarity might be too close to home to enjoy onscreen without any extra dramatic oomph. Two old guys working in a pizza joint and getting insulted by tween customers isn't exactly a life dream – but it could be if the place was fixed up, made respectable, treated as an investment rather than an embarrassment. The awkward but brief dance scene symbolizes how these rhythmless adults are just looking for a nice time where they can find it. Any Day is a mature movie yet it isn't violent with a lot of foul language, sex, or nudity and placating to any audience denominator. There are patchy spots and the redemption seems thinner than it should, but Any Day allows for some lovely moments of faith, prayer, and trust at its core. Maybe the curve balls in life are not coincidence and the good things happening aren't just luck after all.

Boxer Bean is perhaps beginning to show his wear after Sharpe, Lord of the Rings, and Game of Thrones, but we believe his fittingly washed up athlete and prison rugged in Any Day. Besides, Our Man Sean has been known to enjoy a brew or two and get in a bar fight himself. Old friends and family are dead, former gyms can't associate with convicts – Vian's rehabilitated and hasn't had a drink while inside but that isn't good enough for the slim pickings post-recession jobs today. He got drunk and accidentally killed a man, but Vian isn't really a bad guy, right? He walks or takes the bus, and asks to borrow the car while striking out with the ladies and training from home. Vian insists no job is too small – washing cars, sweeping floors, folding pizza boxes – this brought low has made him a teenager all over again. He faces kid bullies, mockery, and icky customers but remains humble and ready to work, thus earning new respect. Vian says he doesn't believe in a higher power, won't take any literary hints, and doesn't listen to family until its too late. However, it's refreshing to have a movie that is simply about a man finding his way, learning to build fresh trust, and resisting alcohol temptations, and Bean does fine work with both Vian's breaking point and life's little pleasures. Despite hampering plot contrivances, we want to see him make amends and turn round right. 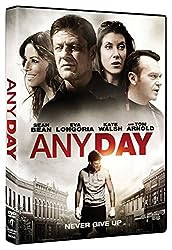 Of course, Kate Walsh (Grey's Anatomy, Private Practice) is not happy to see brother Bean back in Any Day. Bethley's inherited their parents' house after a fatal car accident and is understandably worried about her ex-con brother's influence on her impressionable son. She is a church going single mom who hasn't had it easy and now taking care of her brother contributes to her problems. Vian's late with the car and isn't paying any bills, and Bethley can't take much more. It's a bit of a cliché mother and sister role with some hammy dialogue for Walsh, yet this is a nice part with character movement instead of the usual standing there just being a babe. Walsh wears glasses and doesn't look like a star as Bethley shops with coupons and has her faith tested in the worst way possible. It's not the customary lessons through sport plot, but Any Day does play the relationship between Vian and young Nolan Gross as his nephew Jimmy in typical fashion. Jimmy doesn't deserve the knocks he has in life, much less the expected bullying he receives, and he's a smart, philosophical kid who imparts Vian with as much wisdom as he receives from his uncle. The relationship should be inspirational, but it also comes off as somewhat mystical, compromising the third act in its attempt to elevate it.


Love interest Eva Longoria (Desperate Housewives) represents a slightly more upscale prospect in Any Day – Jolene is a stylish mortgage broker but keeps kindness more important than money. While she and Vian have nice chemistry and conversations, unfortunately, the character is fairly insignificant with as minimal scenes as possible. It's no fault of Longoria, but the age difference between her and Bean is noticeable, and Jolene only serves the man of the movie just because a getting out of prison liaison should be addressed. Any Day does have a few scenes from her perspective, but this brief stalker antagonism goes nowhere. This is Vian's story and any scenes away from him distract from the redemption dynamic. Tom Arnold (True Lies), however, is a pleasant surprise as Vian's hyper, formerly shady, but frank pizza manager Roland. He hires Vian for his honesty, recognizing another man who is looking to rectify past mistakes. There's some nice dimension in their relationship when Roland becomes interested in Bethley as well – they've both been bad boys but Vian disapproves of the risky courtship. Rather than be a hackneyed movie pair or remain a stagnant friendship, Roland has his ups and downs as a parallel imperfect but a-okay hopeful force for Vian.

Although weepy, sentimental fiddle music sets the bittersweet tone for Any Day, a sappy, superfluous music montage comes a bit too soon in this hour and half. The credits, past introduction, and prison release establish the brought low situation just fine, so these extra music moments and slow motion hitting the punching bag scene transitions feel unnecessary. One training montage would have been enough, but again, Any Day isn't about Vian getting back into the ring as those workout snippets may have a viewer believe. Ridiculous foreshadowing bicycle scenes also allude to an obvious, easily deduced, and cliched plot turn, and such semi-deceiving, compromising pieces contribute to a direct to video cheapness or low budget amateur mood. Even the closing credits roll slowly to pad the runtime, again suggesting that when the writer and director are one and the same, there should be another eye assuring a polish and flow to the picture – you know, rather than making dumb mistakes like slow going porn credits. Fortunately, the lone sex scene in Any Day is tender rather than saucy, and there's no nudity taking things to excess. Families sharing older vehicles, fenced yards, and modest ranch homes with cramped interiors create an everyman, downtrodden locale to mirror our protagonist. While dimly lit rooms and night time photography seem dark and overly saturated, scenes filmed in a grocery store are both unusual onscreen yet delightfully commonplace. In Any Day, a simple errand can turn into something fun where anything can happen if you are looking for the sunny side of life.

Strangely, Any Day doesn't seem available on blu-ray, and the DVD rental is as bare bones as they come with information on the picture also tough to find. There's no wikipedia page, and neither Longoria's nor Walsh's pages list Any Day. If I wasn't a Bean fan, I probably wouldn't know about this movie at all. I didn't think a film could be so under the radar in 2015! Sure, Any Day is predictable and cliché with unnecessary scenes and a few odd film making choices. Audiences may not want to see a picture about normal living or find such difficulties too close to home. Some jaded viewers might confuse the internal spirituality and synchronicity for plot coincidence due to a thin script making the same mistake. This broad first draft tone almost leaves Any Day with a tacked on final act. Thankfully, fine performances showcasing realistic problems and daily struggles make up for the banal, and despite its flaws, Any Day is a nice little silver lining catharsis.

Posted by Kristin Battestella at 1:33 AM