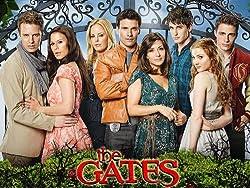 The Gates – Rhona Mitra (who always seems to be in short lived shows) joins new police chief with a questionable past Frank Grillo (Kingdom) for these 13 43 minute episodes aired on ABC in Summer 2010. The pilot gets right to the exclusive, too good to be true community, its bloody reveals, and cheating vampire couples – the carpooling drove her to it! Sadly, ridiculously brief opening credits make it tough to identify the main characters, onscreen introductions are uneven, people who should interact never do, and more players are added or forgotten weekly. The cast is at once diverse yet too Hollywood basic; minorities are both upscale professionals but still treated as secondary with no development. We like Grillo (an Italian actor playing a cop with the Celtic name of Monohan!) but he blindly overreacts to everything. Fortunately, things get intriguing once the high tech security technology and monster revelations turn the tables. The more interesting adult core and sinister guessing should have remained paramount, but the forced family scenes and high school love triangles sag immediately with thinly veiled werewolf latency and succubus birth control. While hammy in her try hard scorn, witch Chandra West (NYPD Blue), apothecary Victoria Platt (Guiding Light), vampire sunscreen jokes, and hypnotic teas are more fun than the badly lit wolfy, unnecessary hip music, dated flip phone texts, and soap opera slow zooms. Though filmed in Louisiana, an onscreen location or new American Gothic flavor is never addressed, and too many writers in so few episodes never allow for a cohesive vision. Redundant revenge and blackmail detract from the supernatural as slo mo vamp fu or dumb ghosts push aside budding monster does not make the man character drama. Every plot of the week filler is tossed at the screen in fast hopes of paranormal capitalizing when all that wasn't working should have been red penciled. Thankfully, Dallas style vamps versus wolfy secrets and bemusing, self aware, Stepford pretenses build enough atmosphere – yes, how do you arrest a vampire? The second half improves even if the final two episodes have the unenviable job of tying up too many loose threads. Ultimately, this series never decides if it is a spooky Melrose Place or a harder horror crime drama. It deserved another ten episodes to get things right, but this messy fun is perfect for a ghouly girls and potato chips binge weekend. 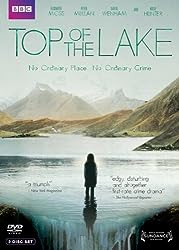 Top of the Lake – This beautifully photographed 2013 New Zealand thriller is broken into seven episodes stateside, but the marathon moves fast thanks to investigation twists, intersecting, desperate characters, and more peripheral crimes. There are red herrings, of course, with suspicious family, shady cops, and local criminals amid the uncomfortable young pregnancy, past abuses, sexual conflicts, self harm, and drug use. It's heavy! Who knows more than they are saying? Everyone knows everybody in this backwater small town, and if the women don't take the gruff from all the drunk, abusive men, then they are shamed, ostracized, and deemed lesbians. The nudity, saucy, and disturbing material, however, is not styled as sensationalized film making, leaving enough intelligent suggestion and implication to invest the audience in the mystery at hand. Unfortunately, there are a few questionable elements – women are always alone in the dark woods without cellphones or protection and too many interesting characters disappear after only a few scenes that seem to suggest they are significant and should appear again. There is no police procedure or back up, evidence is left hanging alongside several loose ends, and naive actions with poor follow through will aggravate long time detective viewers. The timeline also crunches several months worth of hefty events before providing a quicker, rushed, somewhat obvious resolution. Thankfully, this case is about bringing these motley people together and resolving their hidden issues just as much as it is solving the crime, and there are a few shockers, escalations, and taboos not often seen on American television as a result. Golden Globe winner Elizabeth Moss (Mad Men) is wonderful as her detective Robin Griffin deals with close to home sexual violence, past conflicts, and romantic weakness. She makes cop mistakes but rises above the backwoods masculine arrogance from the on form David Wenham – pretty as this show looks, there is no Lord of the Rings here and Faramir this is not! This year resolves itself nicely, so I'm not sure where they are going to go with the forthcoming second series even with the Nicole Kidman joining rumors. However, even when the audience thinks we have the despicable all pegged and the likable players at heart, there's plenty of excellent performances, intrigue, and social examinations here to keep us guessing and shouting at the TV. 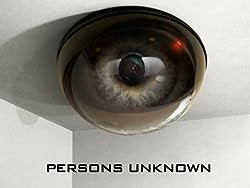 Persons Unknown – I barely made it through this 13 episode mystery thriller originally aired on NBC in Summer 2010 thanks to distorted flashbacks, jagged editing, shrill sounds, whoosh sliding effects, and booming music. Such erratic filming detracts from the anonymous surveillance fears, big brother abductions, and whiff of SF experimentation – which is unfortunately predictable ala “5 Characters in Search of an Exit.” The mostly unfamiliar cast and stock roles – mom, politician's daughter, soldier, mental patient, bully, etc. – are unevenly explored amid repeated team problem solving, leadership divisions, and stupid actions where the consequences are never considered. The wavering pace both shortchanges the narrative by skipping essential research, exploring, and deduction yet simultaneously pads the time by dragging out the tedious for unneeded dramatic effect and wannabe Lost toppers. Lesbian suggestions, Islam, and fallen priest plots are used when convenient or inexplicably dropped, and this lack of character depth pulls the rug out from under the already deflated emotional core. The why of a mid century hotel, empty main street, old payphones, and typewriters are mystery enough yet half the series is wasted on spinning tires escape attempts or stalling because the mole is too obvious and all of the numerous characters are too unlikable. Breaking the shady atmosphere possibilities for external, irrelevant investigative tabloid reporters is a mistake, and throwing love triangles and double talking government reprogramming on top of the heap doesn't hide the careless inconsistencies and tame but trying to be radical contrivances. Italian locales and Spanish flavors don't make up for the lack of answers, and this series proves exactly why episodic, weekly, network television needs to catch up with this decade's streaming, all at once storytelling. It looks like they had no idea how to end this overlong miniseries, which is maddening when viewers are only watching for the mystery to be %$#@^ solved.

Posted by Kristin Battestella at 2:51 PM