Longtime listeners of the themed Nox Arcana gothic and macabre ambiance will enjoy Joseph Varga and William Piotrowski's 2005 debut foray into Christmas music with Winter's Knight. Yes, traditional holiday music audiences may disapprove of the medieval storytelling here, and the dark concept design is not without its flaws. However, the Gregorian tone and frosty bitter stylings give Winter's Knight a seasonal mood for celebrants not bound by the modern holly jolly constructs of Christmas.

Howling winds, church bells, and the short but spooky monologue of Vigil establish the bleak medieval Yule of Winter's Knight, and the poetic brooding segues into the pulsing, ominous rings and chanting chorale moments in Ghosts of Christmas Past. Period strings provide an enchanting sound for Ebonshire next – a wooded, outdoor chilly to match the creepy isolation and heavy chords of Solitude while the chimes and eponymous twinkle amid Crystal Forest create a glassy, delicate ice ballet. Unfortunately, at four and a half minutes, First Snow goes on too long, padding its harpsichord echoes and angelic, soft mood before Evening Star lulls like a louder escalation on the nighttime bleak from First Snow. Though it's all kind of pretty, we've been listening to the same chimes and chants for over seven minutes. Indeed, the first half of Winter's Knight suffers from too many repetitive tracks refraining one too many unnecessary times. An editor would certainly red pencil a stanza or two here! Reflections of Long Ago changes the atmosphere slightly with a sad, spooky, and bittersweet memory, however it's tough to appreciate our own childlike reminiscing or creepy toy recollections thanks to more of the gothic Specter Sound production laying it on thick. 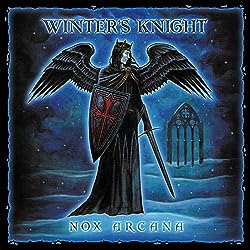 The waltzing organ and frenetic storm strings on December Winds create a blustery cool, but the welcome, tempestuous orchestration is again compromised by an incessant aaaahhhhh ahhhhh ahhhhh ahhhh. This same overproduced design carries over on several Nox Arcana albums, as if the duo simply won't let a song alone and must keep tinkering until every session sounds generally the same. Without looking at the tracks, it's tough to tell where one song ends and another begins – much less identify a tune by its opening notes. Outside of a precious few titles, listeners can't randomly put Nox Arcana songs into a playlist rotation, leaving one no choice but to play the entire sixty-three minutes of Winter's Knight in full. Thankfully, the organ start to Phantom Toccata is superb, like a spooky overnight shift at one of those old-fashioned, multi-floor department stores with a big pipe piece and scary Santa displays. Is that just me? Winter's Knight quickly transitions to the church bells and abandoned cathedral sounds of Hallowed Ruins, and while depressing at times, Winter's Knight has a very likable concept. I wish there was a ballet to visualize this lonely winter wonderland journey. It's only an odd minute, but the eerie vocals of Gregorian Hymn fit this ancient theme of music and voices. Yes, it is creepy but the rhythmic sway also makes for a beautiful period refrain. Rather than falling back on their familiar style, it might have been quite interesting had Nox Arcana done an entire album of older carols and traditionals in this medieval manner.

Comparatively, Spirit of the Season again sounds too redundant. Didn't we just hear this same tune five songs ago? Fortunately, the recognition of Coventry Carol helps Winter's Knight heaps. This is the kind of ye olde tune our titular wanderer would hear, and the connection of listening to something we know as old in this new spin is the seasonal smooth we expected all along. Often instrumental or rushed, this rendition provides clearly audible lyrics, creating a desire to minuet in a morbid jig. Lullaby continues this theme, but we just had a well done rhyme – making for another example of how too many similar songs with too many chants and chimes can at times become just background noise. The titular arias of Winter’s Knight, thankfully, are much nicer, providing the album's dark storytelling with somber cords and melancholy mood as well as calling into question the weaker soundalikes on the first half of the album. Slicing fifteen minutes off Winter's Knight would improve this tale in song tremendously, and the Greensleeves invocations, period strings, and Henry VIII source of Past Time with Good Company are simply divine thanks to the lovely female vocals. Here here for an entire album comprised of such revisited historical odes!

Likewise God Rest Ye Merry Gentleman is familiar and done right with a seasonal bleakness and dark times made at ease with a promise of Light. The organ and chant are brilliant, and we can still sing along to the bombastic bells. The second half of Winter's Knight is much more listener friendly and made much stronger by the Gregorian encapsulation of Veni Veni Emmanuel. The ghostly past of the album's theme is felt alongside the longstanding waiting for which we still light candles and sing songs. Though carrying the courtly sounds to match, Redemption feels slightly out of place amid this latter block of known carols – it may have fit better had it been placed before this spiritual denouement, as if our knight has found that titular peace and that is why we hear the subsequent carols. The haunting zest and recognizable Carol of the Bells anchors the Winter's Knight finale yet oddly stops at 3:25 with an unnecessary minute long silence before music box chimes, wind, and ghostly voices conclude the session. It's a stylistic choice I suppose, and while the album strays and wanders like its knight and treads tires in the snow at times, this medieval brooding is how Winter's Knight should be.

Occasionally, uneven sound design makes it tough to hear the lower background bells or echoes, and thanks to a frequent droning redundancy in the first half, Winter's Knight is almost there, but not quite. I like parts of the opening tunes, but not the entire track itself. I like Winter's Knight yet find myself pausing or skipping through the stock gothic sounds in favor of the superior medieval carol recordings. Though they have done numerous albums since, Winter's Knight sounds a lot like Nox Arcana's other macabre work, making for an odd mix of just right ye olde Yule and too much Halloween. The commercial holiday creep likes to combine these two seasons, but Winter's Knight fits better with some brooding October distance. This is an after Christmas album if you will, purely a windy winter mood setter or the soundtrack to a New Year's Eve masquerade. Understandably, that generic seasonal may annoy traditionalists. Despite the carols, there's precious few Birthly mentions here, as Winter's Knight is meant for audiences who don’t prefer the happy Christmas as is nor celebrate its Christian and religious aspects. By freeing itself of that December 25 timetable and the fourth quarter calendar cha ching, the medieval hearkening of Winter's Knight can be enjoyed by those of us who keep our holiday well into January's chill.

Posted by Kristin Battestella at 2:23 AM