Celtic Woman: Home for Christmas Festive Despite A Few Hiccups

The 2012 holiday follow up Home for Christmas CD and DVD set from international group Celtic Woman isn't the ensemble's best Christmas fare. However, the songful revelry is nonetheless befitting of the season thanks to pleasing carols and festive fiddles.

I'll Be Home For Christmas is not the best place to start Home for Christmas, either, as newer band member Lisa Lambe provides a generic opener not as recognizable with that distinctive Celtic Woman sound. It makes a long time fan immediately miss the departed Lisa Kelly, and I always say Lisa Lambe in full to avoid confusing myself. Hark The Herald Angels Sing is the longest track at five minutes, and original Celtic Woman stars Chloë Agnew, Méav Ní Mhaolchatha, and fiddler Máiréad Nesbitt make this often upbeat carol a showstopper with rousing choir embellishments. I would think Chloë and Máiréad would do something more mature than the too cutesy and juvenile no matter how you jazz it up Santa Claus Is Coming To Town, but Silent Night and the returned Méav carry the right reverent, mellow, and sweeping angelic notes. Likewise, the ye olde spirit continues with the choir, orchestration, and harmonies in We Three Kings. We Wish You a Merry Christmas makes for an odd middle ode on Home for Christmas – one might expect to hear such well wishing nearer the finale instead of interrupting the carols for some pudding and sassy. 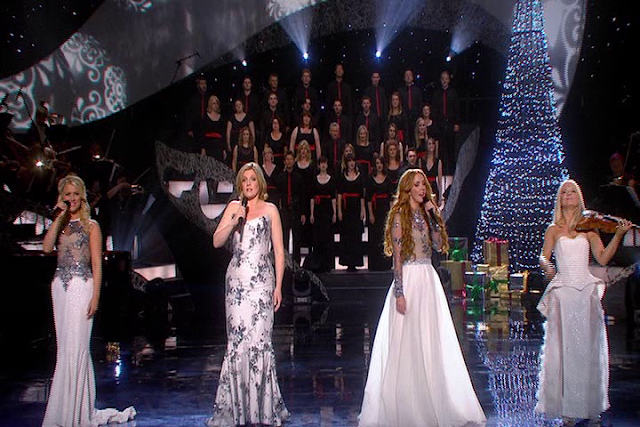 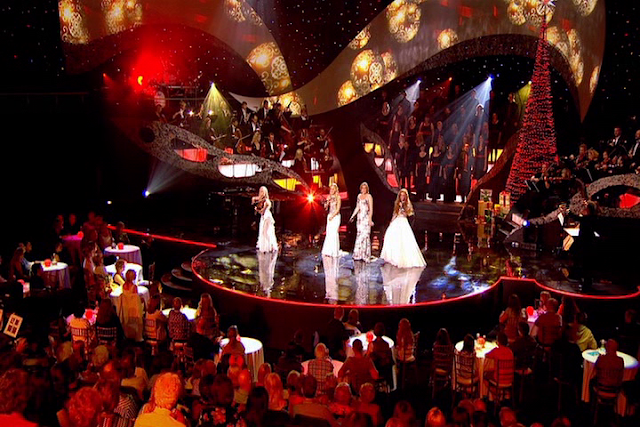 Fortunately, Méav and Máiréad, bring the heartstrings and octaves for the What Child Is This pre-Elizabethan flavor while Chloë adds more medieval revelry with an Adeste Fideles done in full on proper Latin sentiment. Winter Wonderland is again a bit out of place with some jazzy lines and alternating cues so each singer has her moment, and honestly, I would rather have had just Máiréad going all out with the toe tapping medley. The harmonies on Mary's Boy Child are nicer with charming verses and a pleasing chorus taking the tune up a notch, but Lisa Lambe's Auld Lang Syne is a weak denouement. During Celtic Woman's original 2004-2007 line up, even if you didn't know the ladies apart in look when you watched the PBS specials, you could identify each singer's voice on an album when you heard it. Lambe sounds like a stock studio singer, and Celtic Woman's increasing revolving door membership is unfortunately leading to a much more common assembly line sound. Today, you buy an album or tune in for a concert, and you never know what girls you're going to get. Although Joy to the World is a perhaps unusual conclusion, this is a nonetheless merry mix of solos and traditional choir rousing for an all out celebratory finale.

Despite the hiccups, I like listening to Home for Christmas as a CD, however, the companion Home for Christmas DVD concert included with the set isn't always an hour I enjoy. There's no Chloë. How is it Celtic Woman without Chloë? Producer and director David Downes is always nice to see, but with new member Susan McFadden filling in for the tour, Celtic Woman doesn't seem the same. McFadden and Lisa Lambe just seem interchangeable and indistinguishable to me, and neither actress seems capable of being a glass breaking diva like their predecessors. An ominous orchestral start on Winter Wonderland leads off the concert's different track order, but Susan is too pop sounding alongside Méav, Lisa Lambe, and Máiréad. It's also odd that the ladies are holding regular microphones instead of wearing the smaller ear pieces often used today. It's a simple thing, but seeing the mechanics so to speak takes a bit away from the group's previous arms free, flowing ethereal style, and this rendition is a soft, cutesy start compared to the sweeping opening numbers of previous Celtic Woman concerts. Thankfully, the white gowns, silver sparkling accents, and glittering red wardrobe change are fittingly festive for this Home for Christmas concert subtitled Live from Dublin, and Méav and Máiréad are much stronger for the stirring strings and What Child Is This somber for the season – where the vocals are allowed to hold all the spiritual notes. 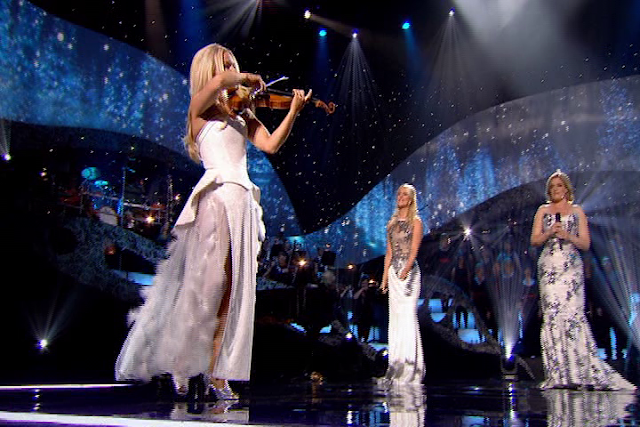 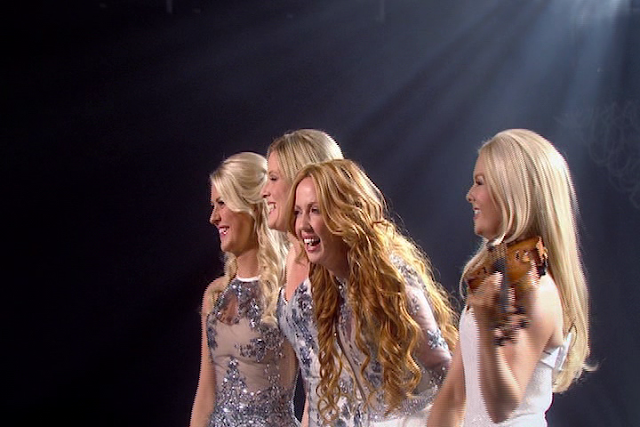 The four person line up of only Susan, Méav, and Lisa Lambe singing with Máiréad's instrumentals, unfortunately, isn't as solid as the previous five person powerhouse, and the rock out harmonies on We Wish You a Merry Christmas feel off, again as does Lisa Lambe's I'll Be Home For Christmas. Maybe a pop arrangement instead of slow melancholy notes is okay, but this generic hip music machine churning out basic sounds that can be heard anywhere design seems contradictory to when Celtic Woman once brought unique international orchestration to the masses. I honestly don't think some of the new ladies can hit the high notes and thus all the production numbers from Live in Dublin are toned down accordingly. Poor Méav is stuck between the newbies for Hark The Herald Angels Sing, and while not as bombastic as the album recording, the straightforward backing choir makes for a pretty, rousing rendition. Meanwhile, instead of her own solo apart from covering Chloë's album track, Susan goes into the crowd for an awkward Santa Claus Is Coming To Town. Fortunately, the lower harmonies on We Three Kings are better – not to mention bagpipes, people, bagpipes – and in a welcome addition to the concert not on the CD, Máiréad does it again with Carol of the Bells. Why is she the one never going solo to make an album of weeping and rousing fiddlelry?

Home for Christmas' three singing ladies also speak briefly before the concert exclusive O Tannenbaum, and the variety of German, Italian, and English verses invokes more of the expected Celtic Woman mood. Likewise, Méav is again stirring for Silent Night as a woman standing still with nothing but the power of her voice to tell the creche miracle. Thank you! Strangely breaking up the largely carol focused night with kitschy fake falling snow, It's Beginning To Look A Lot Like Christmas probably should have started the concert, but I'd love to hear more of the slightly obscure and much more seasonably Celtic The Light of Christmas Morn. Susan also gets her own Live from Dublin solo for It Came Upon A Midnight Clear, and this gospel rendition with a wonderful choir is much nicer than Lisa Lambe's Auld Lang Syne. The poor concert goers are trying to sing along with the almost now unrecognizable tune! Thankfully, the Joy To The World finale is appropriately festive, and what's this? The Home for Christmas DVD bonus content includes another twelve plus minutes featuring all four ladies dressed casually and going a cappella – well, except Máiréad, hehe – around Downes and his piano. Holiday memories are shared, and Lisa Lambe is much stronger for Away in A Manger. Why wasn't this on the album? Susan is also delightful for The Christmas Song, but dang they could have done the entire concert with this relaxed, intimate atmosphere. Released as a bonus track on the Home for Christmas Special Edition, Méav's In the Bleak Midwinter gets everyone choked up, and last but most definitely not least, Máiréad joins in for Have Yourself A Merry Little Christmas. Golly gee, this set is better than the concert itself! 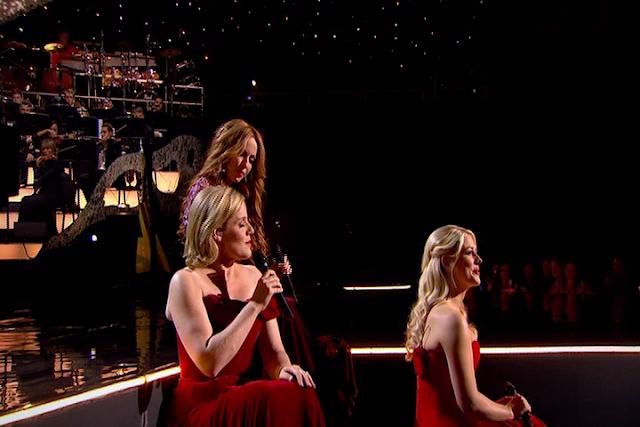 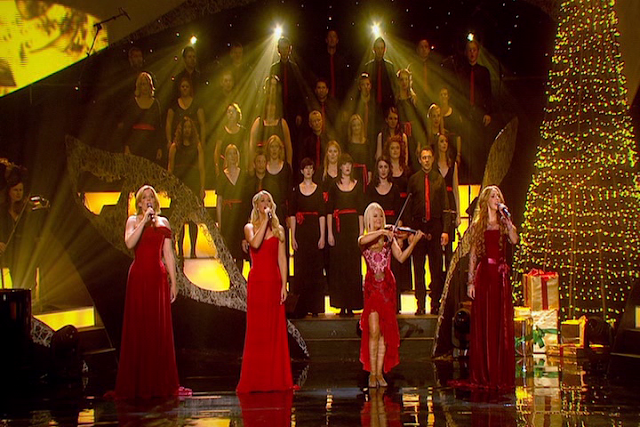 Celtic Woman die hard collectors can chase several additional tracks and international releases for Home for Christmas alongside the rehashed Silent Night and O Christmas Tree compilations, however the big numbers or the sit back and be awed vocals found in Celtic Woman's earlier line ups or the prior A Christmas Celebration album feel absent here. Despite having a majority of religious carols, the tone is a much smaller, more palatable easy forty five minute session. If you don't compare and accept the sweet seasonal mood here, Home for Christmas is a pleasing listen that does what it says in invoking a soft holiday atmosphere. The familiar carols make the CD a quick December staple to pick and choose for your playlist, and when not nitpicking at the included concert DVD, the video works in occupying the television for a festive background accompaniment to your holiday party, Christmas baking, or tree trimming.

Posted by Kristin Battestella at 11:40 PM