Do you avoid your shady neighbor? Get suspicious in quaint little towns and fear being broken down in the backwoods? Well then these twisted tales of rural horror, family scares, small town freaky, and creepy homes are for you! 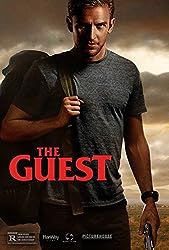 The Guest – Recent, understandable war grief and the surprising comfort of a deceased son's friend visiting could have been a good thing for this home – some heartwarming, healing news. Unfortunately, ex-solider Dan Stevens (Downton Abbey) is not who he appears to be in this 2014 indie family thriller. Halloween timing and an increasing insinuation as the otherwise absentee mom's helper and drinking dad's pal soon turns violent. Don't leave this guy in the kitchen with knives and carving pumpkins! Of course, a shirtless out of the shower pose complete with a halo of steam creates tension with daughter Maika Monroe (It Follows), but the cat ear headbands, bad hair always in the face, and intrusive tunes are already dated. Unnecessary up close zooms also lay the ominous on thick when his sinister characteristics – never sleeping or getting drunk or high and barely eating– are enough. What kind of man comes to school inquiring where the bullys are? Again, he could have been a positive big brother influence and does use his shrewd likability to help. However, he injures the bad kids without a second thought and buys drugs, alcohol, and guns – clearly these opportunistic behaviors and deathly orchestrations must come to a head amid twists, family divides, and siege action in the final half hour. Besides, who knew you could call up the military and get them to do your research montage! It is odd and seemingly out of place to break the family moments and lone wolf point of view – the government could have already been in pursuit with a soon to intersect storyline. There's a whiff of social commentary about post traumatic stress and how we condition these kinds of killers, but it feels expected alongside all the usual action movie notes and the predicable Halloween maze dangers. Fortunately, the ambiguous nature and one on one resolutions carry enough fun shockers, and this is a fast moving, effective watch. And you know what? That little “thanks for watching” message at the end of the credits was actually kind of nice. 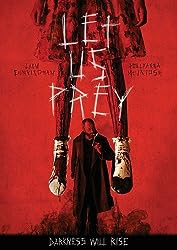 Let us Prey – The Scottish setting and British accents of this 2014 creepy starring Liam Cunningham (Game of Thrones) may be tough for some. The voices are softer than the big sounds, and the dark, saturated picture is tough to see at times. Fortunately, that's about all the quibbles here thanks to ominous waves, bleak crows, and an abandoned, end of the earth isolation. Despite the dark design, several critical scenes are well lit with either halo brightness, orange purgatory hues, a sickly green patina, or red for violent flashbacks. Female clichés are upended amid this interesting cast of characters – and there is plenty of gray behind the bars and the badge making for some mysterious hit and runs, visions, antagonism, and a twisted parable mood. Suspicious doctoring, eerie fingerprints, ticking clock night shift hours, and talk of Biblical retribution but not necessarily salvation add to the bizarre, in limbo happenings. Snippets of past vices quickly reveal what the audience already suspects of our players, and whether Cunningham's little black book is full of vengeance for good or ill, we don't blame him either way. Nice tricks, match strikes, radio call ins, limited technology, and small intimate locales go a long way amid rhythmic editing. There's action, blood, and violence, but this isn't bloated with cool of it all visuals or torture porn. Although the script may be nothing new and we know what's going to happen, the layered references, sardonic irony, and one by one karma is well played and doesn't underestimate the audience. I almost wish this was a limited series with the not so divine collector Cunningham kicking ass and taking names with each cigarette puff, however this is a fine film as is with no need to cheapen the tale with more. Who's the right sacred just in all of this? Who's really a crazy predator? When you think you are one and not the other, does it make a difference? This is a refreshingly adult, R-rated, well thought out and surreal but on point commentary. 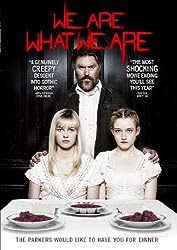 We Are What We Are – A bleak outdoors, dangerous rains, and thunderstorms open this 2013 cannibal family remake amid missing posters, meat grinders, early deaths, and yearly fasting rituals. Clearly something icky is afoot. Despite somewhat recent vehicles and cell phones, old fashioned clothes on the line outside, radio weather reports, and a tape recorder dictation for an autopsy make the rural separation and backwoods upstate onscreen seem older. Candlelight and shadowed buildings are well shot, with wild looking and harsh father Bill Page (American Psycho) singing hymns and saying his children shouldn't be scared. Up close shots of spoons to the mouth and a variety of foods add to the coy hints – coughing up blood, a dog finding bones, repeated “no flesh, no fruit, no grain” talk. Others must eat regular food before it spoils due to storm outages, yet the title hearkens an 'we are what we eat' witticism. A zoomed in focus on the flipping pages of a medical book turning with the camera cuts until the all stop on our C word makes for a quaint but fresh take on the research montage, too. Compared to some expecting big scares, the well paced, simmering dread may seem slow. However, we must see this escalating sinister through because clearly it can't go on as is – again playing on the title's 'it is what it is' perpetuation as this legacy fights against morality, desperation, grief, and rebellion. Wise doctor Michael Parks (Kill Bill) and friendly neighbor Kelly McGillis (Top Gun) provide sophisticated antagonism alongside superb moments of colonial history and extreme Donner inheritance. How far will this monstrous family need go? More pre and post films are planned, and hopefully, they are just as good and don't become diluted into trite teen angst. Enough blood and gore accents the do what they must violence, bonus twists, and brief ritual nudity complete with rattling chains before superb at the table confrontations and a tasty finish. Ironically, I must admit this movie made me hungry and appreciative of proper cooking! Now, why the flip wasn't this in cinemas? 17 screens does not count as a proper release. 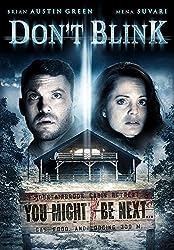 Don't Blink – A typical sunny, green drive complete with John Denver music and an “Are we there yet?” start doesn't bode well for this 2014 resort gone wrong hour and a half starring Brian Austin Green (Beverly Hills 90210) and Mena Suvari (American Pie). Too many jerks, idiot couples, and unlikable character clichés such as the bookish girl, blonde bimbo, crass jokes guy, and know it all dude flood the viewer with who is who and why we don't care. Eerie searches with left behind items, empty shoes, or a drawn bath don't create as much atmosphere as they should thanks to easy jump scares and convenient out of gas troubles. Of course, there is no cell phone service but GPS or other technology and looking up this mysterious mountain retreat before you got there is never addressed – our ensemble stands about and argues or does nothing for the first half the movie, missing clues and going round and round. If this is meant to be paranoia and a sophisticated commentary, then why waste time with obvious scary teases and have such a large cast expected to die in slasher fashion? The mysterious climate changes are never explained, and for all the seemingly simple, linear design, there is a pretentious, heavy handed feeling and over the top amateur tone. Again, I suspect this is due to writer and director and editor Travis Oates wearing too many hats without an objective second opinion. Once we are down to a few people waiting for three hours until help arrives, the tension is much better – each must keep the other in sight despite blackouts and unreliable candles. Unfortunately, by then the movie's over. Though thin in plot, the lofty try hard concept is meant for a thinking person's audience, leaving it up to the viewer to deduce the social statements, out of sight out of mind fears, government conspiracies, or multiverse possibilities. Sadly, that non committal, didn't actually say anything of the picture inadvertently insults the audience's intelligence, and this kind of isolation thriller and psychological analysis has been done better elsewhere.

Posted by Kristin Battestella at 1:19 PM