Dolls, Board Games, and Party Horrors!

Be they good, ho hum, or worse, these films are brimming with the creepy bumps in the night that make us all shudder. You know, toys, dolls, games, and parties gags gone bad! 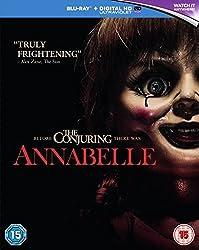 Annabelle – The aptly named Annabelle Wallis (The Tudors) stars with Alfre Woodard (Desperate Housewives) in this 2014 prequel picking up where The Conjuring began with pregnancy perils, babies in danger, and that innately creepy titular doll. A lovely church, sewing at home, and classic cars create a mid century safety before news of cults on the big old flickering television, home invasions in a time of unlocked doors, and a rocking chair creaking on its own add chill up your spine nostalgia. It's pleasing to see period news reports and the actual past horrors rather than have a modern teen re-discovery or sepia flashbacks. I never knew a zooming sewing machine had the right rhythm for intercut editing and escalating perils, either! The marital and parental fears are honest, and moving to a new town or apartment can't out run the scares and records that play by themselves. However, the of the time cliché husband leaves his pregnant wife home alone after an attack and blames the supernatural on postpartum depression – as does a dismissive detective unwilling to consider the paranormal when the church will. Priestly words of warning go unheeded, and though lovely, Woodard is worth so, so much more than the magical negro best friend stereotype. Bookstore research and going down to the dark building basement at night are likewise trite, and some of the doll antics are too bemusing to be scary. Shadowed claws and brief horns work well for the demon, but the full reveal becomes slightly ridiculous in the same old same old third act. If a demon can do all this terrorizing with ancillary ghosts and a doll that doesn't really do very much on its own, then why does it want an infant that can do nothing? The ending is obviously left open for franchising opportunities, and babies, dolls, and moms have been done too many times in horror already. The 100 minute duration builds enough suspense, however it is tough to believe this is Rated R and the feeling that Chucky was better lingers more than it should. While there are easy jump scares, trick elevators, spooky flickering lights, and a few unique frights keep the time entertaining. 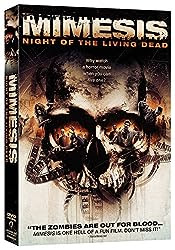 Mimesis – Our appropriately named players Judith, Duane, and Russell are dressed as their Night of the Living Dead characters for this 2011 role playing party – their television is up on two chairs and playing the movie, too. Several shots match the original film and the scares proceed along the same plot, however the game goes horribly awry thanks to social disturbia and fantasy versus reality fandom extremes. At once, this is trying to be Scream in knowing its horror ancestry, yet it's an interesting premise that I'm surprised no one did sooner since the first Dead is in the public domain. Who's in on the ruse? Are they being watched? Can they proceed differently from the original movie? The make up and fakery of the smiling and using tools zombies are obvious too the viewer – but not to those unaware they are within a game in a horror movie – and the story both gains ground and loses rhythm when breaking away from the titular copy. We have to laugh when one zombie yells at another for not doing what a Romero zombie would do! The horror convention opening credits restart several times, and most of it is unneeded. Instead, our unwilling nerdy and skeptical gamers could have woken in media res, filling in the con lifestyle, mysterious party invites, and given commentary on how scary games and movies are blamed for all our violence while strengthening the dialogue. While not as revitalizing as New Nightmare, the satire within moments do make one wonder about all these zombie crawls and flash mobs looking to top each rush. The zombies here jumped the shark four years ago yet this picture's message went unnoticed in the hype since. Unfortunately, the music video strobe filming and stilted camerawork make it tough to appreciate the shocks and critical moments when blurry, slow motion iota floods the picture minute to minute. The shaky cam intrudes on both the tricked out fun house and the psychological scares when straightforward filming would satisfy the largely self aware tension, trapped arguments, and plot divisions. There are a few good scary moments here, and the audience wants to see how closely the game's reveal plays to Night of the Living Dead's cynical finale. It's tough to combine zombies, slashers, dramatic horror, homage, and social commentary, however this one has some intriguing twists. 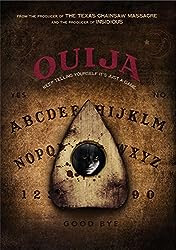 Ouija – Yes, I have a glow in a dark version but no matter how you pronounce it, this 2014 spooky is toppling with teen cliches and pat jump scares – pretty blondes dabble where they shouldn't and hello paranormal consequences! Too many teens pad the body count, and re-shoots make for choppy, confusing editing. The acting is iffy, boy toys are weak, and this latent BFF is way too invested. Do these girls seriously think this is a rare game or secret divination known only to them? While the survivor's guilt and death retrospection had some promise, one can't really expect anything groundbreaking in a Michael Bay produced Platinum Dunes horror movie. Robyn Lively (Teen Witch) and Lin Shaye (Insidious) could have been fine support, but the adults conveniently leave these traumatized kids alone and presenting the concrete corpus delicti evidence to the police is never considered. Phone videos and laptop uses, thankfully, are brief – I'm so glad this wasn't found footage styled – and no smancy opening credits waste time, either. Sadly, despite fine ghostly movements, creepy messages, flickering lamps, blue lighting schemes, and interesting camera angles, the lazy characterizations rely on tough girls turning scared tropes and stupidly presuming this toy is contacting the right person. Viewers are supposed to believe a millennial teen doesn't know how to Google some local history? Plot holes and dumbed down changes make the open for a sequel conclusion obvious – I hope there is a damn authoritative adult asking how all these kids died in Deux. There is a good story and fun to be had here, but pointless meandering makes these ninety minutes seem for naught, cutting the wind out of Ouija's sails for wise horror audiences.

And speaking of Ouija....

Grim – Whooshing opening credits don't illume much in this never ending 85 minutes from 1995 nor do the homemade Ouija board, smoking rocks, and the monster released by such nonsensical Ouija usage. Good thing this beastie has those human sized cages handy! This monster moves through the walls amid new housing construction, cracks in the infrastructure, abandoned mine history, and vanishing neighbors, but the British are once again trying too hard at being American when the switch is unnecessary. There's too much bad acting going around the numerous pissy dudes and screaming chicks – I think they're looking for the people abducted by our said monster. However, the rituals, drums, and rhythmic body chopping look like they're from a different movie. We should never see the cave monster at all, as the red visuals for its perspective are enough alongside the pretty spelunking scenes. This had potential with the natural dangers, bats, deaths, monster battles, and even a few twists. Leave the metaphysical out of it and build the innate fear instead of cockeyed round and round. So all that and you just leave the chained chick there? Harsh.

Posted by Kristin Battestella at 2:30 PM

Love Annabelle and The Conjuring can´t wait to see The Conjuring 2 until then "Who will survive and what will be left of them?"Watch! Lugnet´s Grindhouse Exploitation Double Feature "All The Way" "It Ain´t Easy" ! A Double feature that´ll tear you in two! Starring Tarantino´s favorite 70´s icon/actress Christina Lindberg!
https://www.youtube.com/watch?v=u2luOuo5-iQ&list=PL2M7luJCDh3GWGlg04BscaQjOKLkaRvVV