Bodies, Graves, and Coffins Oh My!


Bodies, Graves, and Coffins, Oh My!
By Kristin Battestella

The death rituals, wooden boxes, burials gone awry, and perverse morgue practices in this trio of twisted films old and new are not for the claustrophobic or faint of heart, I assure you. 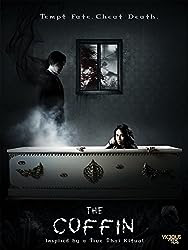 The Coffin – It's a little tough to find information about this 2008 commonly titled picture. Fortunately, woodwork, nails, and bones set the mood for this Thai custom of cheating death by lying in a coffin in complete pseudo funerary. X-rays, visions of hospital beds, death as seduction artwork, and the passing along of bad karma thanks to used coffins add to the in limbo atmosphere, ill luck reversals, and fantastical news reports. Toddlers cry beside this mock ritual, not understanding why – surely this bizarre practice mocks fate rather than cleanses its practitioners. Unfortunately, the digital gradient here is ridiculously blue tinted. Outside of some scary fire action, seriously everything is blue. While phones and texting are slightly annoying as well, interior darkness and precious phone lights accentuate the claustrophobic, up close viewpoints inside the limited titular space – capturing the paranoia and confinement fears we all secretly harbor. Heart stopping scares, reviving emergencies, and bloody bodies add to the eighty minutes of unease as do some surprisingly good jump scares and hauntings. Is it all just sensory deprivations and coffin crazed hallucinations? Although the premise is intriguing, our players aren't really introduced, and confusing visions and disjointed flashbacks never give the audience firm footing. Is this ghosts, dreams, a coma, purgatory, all in somebody's head? It's not an enjoyable mystery when you are deliberately being obtuse with try hard plot holes and that oh so blue sophistication. Has anything real actually happened amid this plodding, intertwined editing? The slow pace and head scratching inexplicable can be frustrating here. Thankfully, the unique locale, variety of languages, Eastern customs, and refreshing non-whitewashed casting add enough bonuses to witness this kind of fresh horror tale. But seriously, enough already with the blue! 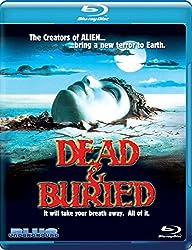 Dead and Buried – The idyllic New England coast and brisk, seaside beauty complete with saucy photoshoots and old fashioned, sentimental camera shutter clicks belie the carefully orchestrated violence to come in this 1981 shocker. More flashbulbs, phone operators, and sweet big band music add to the earlier mid century quaint – this morgue has a twisted sense of class, respect, and demented beauty in death but too much murder per capita. No mom, dad, and little boy lost on the way to vacation, stay away! These escalating, suspenseful, and creative kills are a community activity; it's the town pleasure to lure visitors to abandoned, isolated areas for these ninety odd minutes of atmosphere and hysteria. All of Potter's Bluff seems in on the well laid trap – except for new big city educated sheriff James Farentino (Dynasty) returning to his old home town in a man alone verses a warped The Wicker Man cult society. How long has this been happening? These crimes, dead bodies, and townsfolk aren't what they seem, and talk of witchcraft books and zombie voodoo folklore don't provide answers. The mystery reveals itself as the bizarre increases, and the period piece style is also slightly prophetic – mass mobs photograph the macabre as we rubber neck at a car accident and replay the morbid with social media. Yes, some of the effects here are poor. However other designs are very good, and the superb looking blu-ray also provides featurettes on the Stan Winston (Terminator 2) effects alongside interviews with young Fred Kreuger Robert Englund and writer Dan O'Bannon (Alien). Though perhaps tame by today's standards regarding gore, there is more than enough blood, hearts, body parts, and snuff film leading to a wild, entertaining finish. 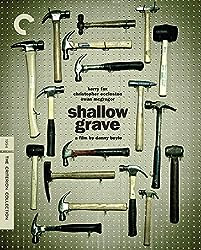 Shallow Grave – Zipping cars and a dizzying spiral staircase add to the head spinning roommate interviews and cruel, arrogant personalities of a young Ewan McGregor (Star Wars) and floppy haired Christopher Eccelston (Doctor Who) in director Danny Boyle's (Trainspotting) 1994 satirical dead body thriller. The them dorky versus us cool intercut editing establishes a demented sense of humor, and the bright, colorful yuppie kind of garish turns darker once their mysterious new roommate enters with a suitcase full of money only to die naked in his bed a few days later. We don't know the full extent of this tenant arrangement, but the sexual tension with Kerry Fox (Intimacy) is apparent even if the trust between this trio is growing thin after chopping off heads, sawing off some hands, knocking out a few teeth, and burying a body or two. Although already amoral enough, no one wants to get their sophisticated hands dirty – but oh how chopping up a body for the money reveals one's sadistic nature! Great quips soon lead to sardonic, amateur body bungling mixed with real crime and violence professionals. A bleak booby trapped attic, divisive secrets, and calculating behaviors escalate as police and newspapers loom. Who's plotting what and uniting to point the finger against whom? Red photography, footsteps, and The Wicker Man on their television charge the atmosphere as the increasing cover ups lead to more death, creepy behaviors, and suspicions. The subtitles will be necessary for those who have a tough time with thick accents, but the interviews and commentary on the Criterion blu-ray edition add some bemusing insights. Superb shocks and greedy, ironic twists keep this genre-bender intense for the full ninety minutes.

Posted by Kristin Battestella at 11:44 AM