Disturbing the Peace isn't bad, it just has to be viewed Hysterically 😄

Former Texas Ranger turned U.S. Marshal Jim Dillon (Guy Pearce) paralyzes his partner in the line of duty and gives up wearing a gun. Ten years later, biker Diablo (Devon Sawa) and his gang ride into Dillon's peaceful Kentucky town to stir up trouble and rob an armored truck – forcing Dillon to take up arms and go old school on horseback to save the day.

The 2020 action vehicle Disturbing the Peace has a lot of real world nonsensical to match its typical, pseudo western premise, and the not thinking the details through shows, relying on convenience, people being stupid onscreen, and underestimating viewers familiar with throwback action yarns. No Kentucky townsfolk have guns handy to fight the bad guys? A deputy radios that he is on his way to the county lock up, but they aren't concerned when he never arrives? Cutting one big wire kills the power, phones, and internet for an entire town? Dialogue has people say one thing then do another while flashbacks show the shooting before talking again tells us why Dillon doesn't carry a gun. The Law compounds the rough housing biker set up by separating and transporting a prisoner rather than doing a good old John Wayne – hold the bad guy in the lock up and brace for a siege. A slow chase to lure away a county sheriff patrol and swap his uniform makes for a meaningless delay alongside a lot of walking to and fro, padding time while the ridiculous direction acerbates all Disturbing the Peace's flaws with constantly in motion camerawork. The on the move pace tries to compensate by being so busy we can't see anything, but instead the audience has no time to stay with the potentially intriguing main character thanks to the superficial, fly by night cheapness. The amateur extras are bad, and that's nobody's fault, but if you need to cut corners, rely on your star. We don't need to see anything about the armored truck before it pulls into town, and bad shooting or unrealistic blood ruins tense hostage moments and threatening countdowns. Possible ways out of the situation are dismissed without every really being addressed when foiled attempts to seek help would show the desperation, and there's no organized plan to fight back. Disturbing the Peace could have been a straightforward tale about one once bad ass but now struggling sheriff saving his town, but the attempt at modern cinematic cool doesn't jive with the man alone eighties action constructs. Civilians have to die before the heist is taken seriously – suspense contrived for the audience rather those in the onscreen crisis. Visuals focusing on guns, flags, and other Americana imply there is some kind of underlying social commentary, but there is none, only marine corps history thrown in to turn a biker in another ultimately useless scene. The bikers should leave when they have the chance, but intercut confrontations and stupid actions compromise what should be the big moment of the movie when our Marshal takes the shot he must make. Fortunately, the bad guys never takeover the police station so Dillon can just go back to it for all the gear he needs – another laughable convenience alongside the repeated shots of several beautiful but unused police SUVS. It's a good thing the church has a ham radio to call for help after the Marshal already saves the day by galloping down main street, which is admittedly pretty cool if you can ignore all the preposterous things happening. 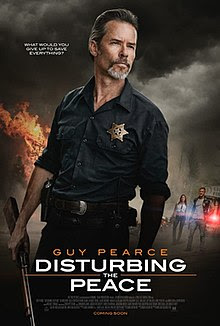 Well, it's finally happened. Guy Pearce (Memento, L.A. Confidential, The Proposition) has actually made a bad movie, but it wasn't his fault, I swear. A conflicted U.S. Marshal giving up his gun after a shooting gone wrong sounds like a meaty role. Pearce comes through as always, he walks the walk with salt and pepper rugged and big redneck regalia, but there's no time to linger on Dillon's quandary when the story should be from his perspective. The audience constantly wonders why in the heck he is a U.S. Marshal and not just a town sheriff, and the opening incident should have been ten months ago for much more immediate pain and consequences – rather than ten whopping years of being in law enforcement and never using a gun. I mean, doesn't he have to re-qualify on weaponry from time to time? Dillon says his paralyzed partner never got to hold his kids again, implying this biker incident could be revenge from the now deceased victim's family, but Disturbing the Peace doesn't get that personal. We don't know how Dillon got this backwoods assignment or how he went from being a Texas Ranger to a U.S. Marshal. If he doesn't have roots in town, why couldn't he just be a Ranger on leave passing through who decides to do something about saving people? There were numerous ways to get the head scratching technicalities right while deepening Dillon's backstory. Instead, we have a nice if on the nose moment where he wrestles a gun from a baddie but throws it in the dumpster because at that point, he still thinks he can do things his way. Of course, after a few shaky cam letters, drinks, pills, a mirror, and an old badge, Dillon is over it enough to kill when he doesn't have to as Disturbing the Peace sadly makes his character choices happen to move the plot rather than for true contemplation. Even the movie poster shows our lawman who won't pick up a gun...holding a gun. o_O The Marshal should be able to prove he can arrest the bad guys and provide justice without resorting to a final kill, but Disturbing the Peace treats what should be the biggest part of the picture as an afterthought.

It's bemusing when the irrelevant deputy's name Matt is heard together onscreen with Dillon, hehe, but if the character wasn't there you wouldn't notice the difference. He's a weak sounding board used to reiterate every situation to the audience when killing him off early would have better raised the stakes. It is funny though when the deputy introduces himself to the Marshal over their walkie talkies and Dillon delicious deadpans that yeah, he knows who it is. Devon Sawa (Final Destination), on the other hand, isn't bad as our well spoken biker villain with town history. His one on one scenes with the Marshal are fine and Diablo has researched his targets, but his resentful backstory is given away easily by someone else instead of being a hard hitting revelation. Increasingly preposterous turns hurt the ultimately nonsensical plans, undercutting his psychological talk, on edge crazy, and refusal to go back to prison. The gang goes through all this trouble to rob a bank, then waits for a scheduled armored truck when it doesn't seem like a lot of money split a dozen ways. Brief moments of camaraderie and tattooed creeds aren't enough reason for them to die for Diablo, and every bad guy protests that no one was supposed to die...right before someone inevitably dies. Kelly Greyson's (Woodlawn) Catie could have been cool, but she is a waitress by day and bartender by night who kicks ass when not being a gun toting horsewoman and a midriff wearing minister's daughter who now gives the sermons herself on Sunday – after Dillon's over for a ride, meow. Tough Catie does more than the deputy, but it's all a bit Mary Sue much when one of those elements would suffice. Then again WWE star Barbie Blank is a bank mole who does nothing save for dressing exactly like Catie so the two can have some falling flat cat fight titillation. Catie can't wrestle a weapon from a man but she can take on another woman and save the hostages once the script says so. The sleazy wannabe mayor out to get Dillon is also a whole lot of nothing forgotten as necessary. Like anybody's going to vote for this weasel if he's running against Guy Felicia Exley Leonard Killian Weyland Pearce.

On location filming, Main Street feelings, and on foot around town give Disturbing the Peace a quaint authentic look. Regular townsfolk, big hats, beards, plaid, and big belt buckles invoke Southern charm, but the women are made up as Hollywood unrealistic, canceling out the country mood. The lack of afternoon town bustle is also unlikely, replaced by overhead or long distance montages with old barns, rusty trucks, panoramic silos, trains, and even grass just because somebody had a drone. Rather than adding flair, a few unique camera angles and security camera footage call attention to themselves amid herky jerky camerawork where we can't see anything. Hand to hand fight scenes start cool, but the hits don't seem to have any pain or impact, and there should have been more improvised combat or one on ones if Disturbing the Peace is about not using guns. Instead of gearing up at the hardware store for alternatives, there's only one Macguyver type bomb ploy. No one tries to start a signal fire, strike a match at a gas station, or use explosives, probably because there wasn't enough budget to do so, as the few fiery effects here are poor. Unfortunately, no matter the pistol, revolver, shotgun, or rifle, the gunfire sounds like toy pops or firecrackers. Blood and squibs never match the wounds, kickbacks are nonexistent, automatic weapons with scopes never hit anything, and guns jam because nobody knows how to reload. I couldn't help myself I giggled every time there was a gunshot. Of all the vehicles available, Disturbing the Peace comes down to a scooter getting shot at from a horseback pursuit, but won't the asphalt hurt the horse shoes? Between the minute odd of opening tags and eight minutes of credits, this is really only eighty-two minutes, and the slow as porn scroll gives viewers time to notice the numerous repeated departments and additional personnel – suggesting Disturbing the Peace had more than just the usual re-shoots, somebody tried to fix the production after the fact, and there's probably a lot more footage that we didn't get to see. Was nobody watching the dailies? Did they not have a fact checker or a props master or, you know, Foley?

It's always a bad sign when the viewer is aware action is proceeding just because it should in scene or real world logic be damned. Problematic direction runs Disturbing the Peace into the ground when its star and antagonist were capable of handling the violent potential. Yet somehow, I can't hate Disturbing the Peace because I laughed the entire time. This isn't so bad it's good, but Disturbing the Peace can be an entertaining lark if viewed as inadvertently hysterical. 🙃

Posted by Kristin Battestella at 1:32 AM