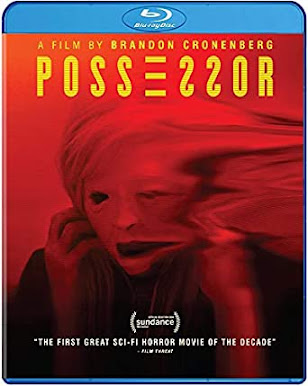 Possessor is a Sophisticated Sci-Fi Parable

Bloody plugs squish into the scalp and Possessor immediately catches the audience with bittersweet tears and gunshots breaking the silent luxury. Medical awakenings lead to vomiting and severed links with the host, but there are no lingering side effects or anomalies – supposedly. Memory debriefings and artifacts from childhood help our assassin adjust before returning to the modest home and family, but the dinner conversation is a lie, detached just like the news reports of the preceding crime. The scientific chats, however, are cold but honest, for one can't really bring these experiences home. Surveillance begins for the next project alongside practicing mannerisms, abducted subject prep, and scheduling details. Three days and no room for error adds ticking clocks and technicalities to the personal amid the fantastic crimes and dual performances. After spending time in our assassin's point of view, now Possessor has her inside the man who will unwitting kill his lover for someone else's corporate gain. Exterior spying and interior simulations layer the invasive intimacy as multiple sensations and minutia over stimulate our host – leading to fractures in the mind and body connections. Friends and lovers blur as hiding in a social situation is easier than facing the coupled dishonesty. The woman in a man's body reversal acerbates the rough sex and suppressed consciousness as the slow burn suspense and initial hesitations culminate with kills both calculated and messy. Editing matches the close quarters blows while brutal scenes play out – taking their gory time without special effects exaggeration. Glitches make retrievals difficult as the violence and science go wrong and unforeseen problems like will power blend our personalities together. We are with both characters at the same time, but in set up fixers, and the need to survive question who is dominant. Possessor enters a mental surreal as the personas fight each other, one donning the distorted mask of the other as corrupted memories and homicidal guilt bleed together. The killings intrude on the home and family sacred with sad but disturbing predatory revelations, and the psychology, performances, and physicality merge as the cruel turnabouts come full circle.

Vos says she's fine but we know she's not, and Andrea Riseborough (The Devil's Mistress) is pale and sickly, rehearsing being herself and pretending to be glad after a work trip. She wants to take time off and fix her marriage, but Vos is detached even during intimacy and the use of Tas at home but Vos at work shows her conflicted identity. It's easier to be someone else than herself, but the complications are increasing and Vos chooses more violent weapons like knives and fireplace pokers over easier guns. She lies that there are no disruptions yet spies on her family as her subject, realizing the choice between work and home that's holding her back. Unwitting host Christopher Abbott (First Man) as boyfriend cum killer Colin Tate is initially a sassy lover, but he makes mistakes, hesitates, and loses control as Vos emerges. Tate is weakening outside but fighting in their mind, forcing conflict as Possessor presents two people playing the same character. We feel for both in this fascinating twofer because they need each other to survive and end their torment but their relationship will never be mutual. Swanky, hobnobbing, corporate big wig Sean Bean (Sharpe), however, and his saucy daughter Tuppence Middleton (Dickensian) fight about her dating a nobody like Tate. Parse has elaborate parties but living it up is not enough and he's taking his data mining tech to the next level. Both he and the seemingly devoted Ava treat Tate as the latest plaything, but they have no way of knowing Vos' influence – leading to disturbing payback. Initially handler Jennifer Jason Leigh (The Hateful Eight) seems to care, too, debriefing Vos and reclining beside her during the assassinations with tips and tech support. A former assassin herself, Girder wants Vos to eventually replace her, but she thinks her star performer would be better off if she didn't have real world attachments. Girder sends in a fixer to assure this critical contract is fulfilled – doing what she has to do to see the mission accomplished.

Exotic hotels provide futuristic mood thanks to red lights and a reflective black sheen. Rather than excessive CGI sci-fi world building or wasting time with future city skylines and rad technology, smart use of color and mod chairs in the otherwise sparse briefing room offer enough cool without contemporary omnipresent technology to eventually date Possessor's timeless concepts. Calibrations and scientific dossiers let us know the dangerous perimeters while jack ins, the melting away self, and flashes of the takeover invoke a seventies science fiction arty as one person molds into another. Possessor is shocking but pretty with blurs, distortions, dual echoes, and overlays showing the inside another person's mind intimate. Practical effects and in camera action create an audience tangible to the within within dilemmas. Classic cars are both a sign of wealth and a visual throwback while vaping instead of smoking also feels niche and elite. Grandiose architecture, fresco ceilings, and marble staircases symbolically ascend while blunt gunfire, squishing stabs, and merging pools of blood pierce the senses. Lighting schemes and mirrors allow us to see multiple characters in one at the same time – an eerie but simple self-awareness amid invasive big brother televisions, cameras, and screens paralleling the who's watching whom and who is really in control familiarity. Some enjoy the voyeurism, upping the sex and nudity when they know there's spying while Possessor winks at the cinematic experience itself. Ironically, the censorship between the R and Unrated versions is more about erections then gore, adding intrigue elements regarding women predators versus macho men, ambiguous sexuality, and gender identity. The rental blu-ray also features deleted scenes with extra character details and lengthy behind the scenes conversations, but when I went to buy the elusive Possessor Uncut blu-ray, it was an “only one left” click and my purchase was ultimately canceled. 😕

Possessor may be slow for viewers accustomed to science fiction action and high tech in your face cool a minute. The well done gore is brutal yet this is not outright horror for those expecting formulaic scares. The chilling what if invasive is disturbing, and old school touches accent Possessor's bizarre. This looks like one of dad David Cronenberg's (Rabid) films, and that isn't a bad thing. Fine performances carry the science fiction pains, and the personal intelligence and sophistication keep audiences thinking about the consequences long after Possessor ends.

Posted by Kristin Battestella at 1:15 AM