From all out parody to quirkiness and cosmic puns, each of these retro, recent, or blockbuster science fiction tales provide an element of humorous entertainment.

Return of the Killer Tomatoes – It's tomato prohibition in this 1988 sequel to Attack of the Killer Tomatoes starring Anthony Starke (The Magnificent Seven), George Clooney (Michael Clayton), and John Astin (The Addams Family). Self-aware late night movie hosts almost air Big Breasted Girls Go to the Beach and Take Their Tops Off instead, adding then PG-13 saucy to the MST3King itself meta before it was meta. The secret word of the day is “the,” creating an impossible drinking game to match the preposterous Professor Gangreen mad science, lab experiments, tomato tests, and pizzas with some, umm, interesting topping combinations sans tomatoes. The younger generation rolls their eyes at elders treating The Great Tomato war as some St. Crispin's Day glory, flashbacks captioned as “New York City” have San Francisco trolley cars, and call ins ask why they keep showing scenes from the first movie. There are world domination plans to place plants from within the police right up to president, and bad special effects, red lights, green glows, a fuzzy friendly tomato, and a snake named Larry join the handsome assistant Igor. Reporters shame and berate witnesses on the air yet everyone wants to be on camera, and romantic interludes on the beach get ruined by a mime as the fourth wall is often broken thanks to tomato bootleggers, Valerian root powder, and inquires on if it's too late to have a movie chase. Let's yell “Tomato!” in a crowded restaurant and point at the “tomato lover” because tomatoes are evil – a good tomato is a squashed tomato! The within within life imitating art comes to a head with behind the scenes interruptions; they are out of money so the cast and crew are now incorporating product placement right down to the cereal box between the two shot conversation. Rednecks with beer, ninjas in black fighting cowboys in white hats, and “Vigilance is the Price of Freedom. Report any suspicious vegetable activity.” Uncle Sam posters escalate to luxury construction at the toxic waste dump, prison escapes for golfing White House aides, Soylent Green homages, and an interactive Frankenstein. Once the stars ask if they have enough money to finish this turkey, the product placement begats celebrity spoofs, music knockoffs, and killer countdowns with a scoreboard and referee. Fortunately, a page from the script is handy to write a note on asking for help and shootouts result in ketchup. Layered dialogue and visual gags send up everything possible in every scene, requiring multiple viewings for all the laugh at its corny self in on the joke ridiculous. While certainly endearing for those who loved this then, today this remains an enjoyable eighties comedy that's surprisingly intelligent and ahead of its time.

Space Station 76 – Patrick Wilson (Bone Tomahawk), Liv Tyler (Lord of the Rings), Matt Bomer (White Collar), and more are all aboard for this 2014 retro futuristic seventies wink, and we immediately feel the groovy thanks to the deliberately old fashioned space shuttles, colorful special effects, bright white corridors, and spinning station design. Rather than psychedelic in your face weird, the flashing lights, lasers, and saucy visions are pleasing to today's HD eye. Vintage panels, knobs, analog gizmos, mid century plastics, viewfinders, cigarettes, ash trays, wild wallpaper, and roller skates accent the rec room luaus and awkward cafeterias as the interconnected relationships, hidden sexuality, and affairs leave plenty of foots in people's mouths. Between the undefined jobs the crew does poorly, bored housewives, lingering hippie mentalities, waterbeds, and confined interiors a lot can happen. Our incoming career oriented female officer doesn't fit in and can see the going through the motions situations. There are children on board, however the vain and manipulative parents are more interested in Valium, porn magazines, and robots because it's easier to interact with machinery and automation than build healthy relationships. Some remember growing up on earth and doing things for oneself versus space-bound reliance, but the should be idyllic futuristic bliss only creates an inability to cope. One can't even kill himself by dropping the retro radio into the bathtub because the system corrects the overloaded circuits. Naturalistic conversations provide annoyed, off the cuff sardonic socializing attempts while subtle humor – like using the arboretum to grow pot and a robotic hand getting stuck gripping a boob – alleviates any potential tenderness. The ironic, feel good classic soundtrack matches anti-gravity moments enjoying the space faring circumstances, but arguments and lies lead to contrived Christmas parties, stranded consequences, and embarrassing secrets. They are stuck with where and who they are, and somehow have to make the best of it. Although this might have been interesting as a series, the refreshing R zany but not laugh out loud doesn't overstay its welcome. I'm surprised this movie isn't more popular, as other comedy science fiction shows are full blown sends ups, but here the quirky framework anchors serious, well done characterizations. Rather than making fun of the era, the kitschy innuendo helps create a façade for the interpersonal issues, jobs over emotions, and loneliness. This is a touching little film with bemusing nostalgia and social commentary, but labeling this a comedy isn't quite fair once the drama hits too close to home, for we too have technology replacing human interaction and it is far from perfect. 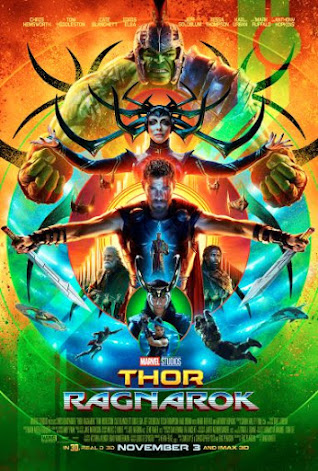 Thor: Ragnarok – Taika Waititi (What We Do in the Shadows) directs the titular Chris Hemsworth, Tom Hiddleston (Only Lovers Left Alive), and Tessa Thompson (Westworld) in this 2017 Marvel sequel exploding with eighties sci-fi homage, edgy rock tunes, retro video tours, Willy Wonka notes, flashy colors, and intergalactic flair. Unlike the morose fantasy of Thor: The Dark World; industrial trash, damaged spaceships, and beer are rough and wild – matching the caged and chained Thor as he waxes on his heroic status, the new lack thereof, fiery attacks, and lightning displays. Asgard is in peril, but dramatic choirs and rewritten odes starring Matt Damon (Interstellar) and the delightful Anthony Hopkins (Hannibal) as Loki pretending to be Odin lead to Norway goodbyes, somber conversations, and family regrets. Thanks to trailer giveaways and obvious foreshadowing, there aren't many surprises, but the locales proceed quest-style with friends or enemies along the way including Benedict Cumberbatch's (Sherlock) Doctor Strange and the scene chewing Cate Blanchett (Elizabeth) as the unleashed Hela, Goddess of Death. Visual tricks, sight gags, and umbrella disguises accent the superhero send up as Thor is dragged by his cape and put in his place. Mark Ruffalo's (The Normal Heart) gladiator Hulk and the campy Grandmaster Jeff Goldblum (Independence Day) add personal banter, self-aware charm, and even flirtatiousness thanks to hot tubs and green butt shots. The battle action CGI can be busy, herky jerky messy where you can't see anything, however unique Valkyrie flashbacks, mystical elements, and slow motion superhero cool moments set off the hidden Asgard history, giant wolves, and undead lairs. Unfortunately, it gets a little old when there's a quip, humorous aside, and lighthearted tension breaker interrupting every serious scene. Asgardians are literally being butchered while we're being told to laugh with distracting, gif-able wisecracks. This uneven back and forth between the violence and the refreshing reboot undercuts Hela's threats – leaving us to wonder if we even need the eponymous destruction when this could just be about The Revengers and their baggage escaping Sakaar, cool cool. After spending most of the time here mocking the previous Thor films, the end heroics are ironically played straight and the characters remain more important than the action. While the irreverent attitudes and flippant comedy in the wrong places could have chilled, this doesn't follow typical Marvel patterns. Thor needed to change it up, and the entertainment moves fast for fans as well as viewers looking for something different.

Posted by Kristin Battestella at 9:41 PM