In 2022, New York City is over populated with forty million people. Unemployment, homelessness, heatwaves, and hunger are rampant – leaving Detective Frank Thorn (Charlton Heston) on riot duty until the murder of a wealthy board member for the Soylent Corporation. Soylent's latest nutritional supplement is made from plankton and called Soylent Green, but quantities are limited and Thorn's aging research partner Solomon Roth (Edward G. Robinson) uncovers a secret, disturbing ingredient. Thorn digs deeper into the case, but politicians want Chief Hatcher (Brock Peters) to close the investigation, placing Thorn's life in danger as he gets closer to revealing the unsavory truth.

Vintage tintype pictures open director Richard Fleischer (Fantastic Voyage) and writer Stanley Greenberg's (Skyjacked) 1973 Soylent Green adaptation of the Harry Harrison novel with ye olde history before speeding slideshows of industry highs, crisis lows, and superb instrumentals to match. Now it's all community removal announcements, prohibited locales, and advertisements for Soylent Red, Soylent Yellow, and the new Soylent Green. Butter and paper are rare, light bulbs are dimming, and hustling is the only way to obtain goods. Our tough men are both delighted and ashamed of their looting while other people sleep in stairwells or live in cars permanently parked in the streets. Classical music accents meager meals we would take for granted as adults delight over advantageous plastic spoons, never before tasted stew, and a sample of strawberries that cost $150 a jar! Of course, the wealthy live in luxury apartments – privileged with suave ladies called “furniture,” fresh meat, and precious vegetables – and authority figures who should have power are envious of lavishness the affluent don't appreciate such as real beds, lengthy hot showers, and air conditioning. Desperate poor are hired to kill those above with surprising, blunt violence amid the beaded curtains, white furs, and scotch. Bodies are taken to waste disposal centers, but old folks remember when there used to be ceremonies for the dead. Orphans in bunk beds fill the churches instead of pews, and truths told in confession are too much for a priest to bear. 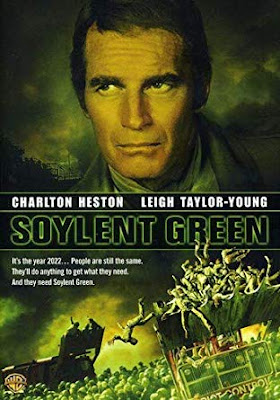 In Soylent Green, broken people are trying to survive the bleak dystopian atmosphere, numbers instead of names waiting in line for water, food coupons, or death benefits. Long lines of poor and hungry won't stand for short rations, and riots between the haves and have nots escalate alongside disturbingly nonchalant violence in sacred places. Assassination set ups and multi-layered mysteries – when there are one hundred and thirty-seven murders a day, why argue when the higher ups want a case closed? Investigation exposition provides how Soylent came to control frozen food manufacturing, law firms, governors, and sustenance for half the planet. Those in the know are followed and police hands are tied by cryptic conversations about silencing others. Viewers have seen similar Depression angst and more recent meaningless Black Friday mobs, but in Soylent Green, screaming crowds are hauled away, tossed into creepy forklifts, and hoisted into dumpsters. Scenes sans music echo with droning machinery as silencer gunshots narrow the seemingly broad point of view via process of elimination, supply and demand, and two birds with one stone control. There are few options beyond sad euthanasia opportunities – a pleasant twenty minutes with your favorite music, color, and theatrical presentations featuring long lost nature, flowers, animals, oceans, and sunsets. Soylent Green is emotional without saying a word in exceptional one man reveals unknown to the audience thanks to silent mouthings, headphones, and wide-eyed, shocked reactions. Viewers aren't spoon fed in another silent sequence of sanitation trucks, stowaways, and processing plants. We're beside the detective's need to know amid the mechanical hums, buzzing equipment, and disposal center tense as conveyor belts and assembly lines lead to goodbye phone calls, shootouts, and a now famous revelation.

Good Old Post Apocalyptic Chuck strikes again, as Charlton Heston's (The Omega Man) Detective Thorn goes through the motions of his dog eat dog existence. He has a badge, riot gear that's little more than a football helmet, and no protocol – sweaty and unbothered as he pilfers booze and satin pillowcases from his night shift crime scene. Frank turns on the tap just to feel the running water on his face, sniffs the soap, wants a glass filled with rare ice, and treats himself to the puff of a cigarette. He flirts with the ladies as the interrogating man in charge but insists he doesn't have the time to ask them for anything nice. Thorn's envious of what rich men have, angry over how most people aren't angry about their entire situation. He's not afraid to rough up anyone attacking him man or woman but defends abused women and understands when a hungry crowd won't disperse. Frank can't be off work himself for more than two days, fearing for his job and his very livelihood, yet he risks investigating this shelved case despite threats against him. He refuses to see a police doctor, but Thorn's hunched and distraught earnestness is firmly felt. He's wounded and running, still trying to remain upright and take action because he must. At last Thorn experiences all the things he never knew, which lead him to what he doesn't want to know. Soylent Green is the swansong for Edward G. Robinson (The Ten Commandments), and his once revered professor remembers when food was food, water wasn't poison, and soil wasn't toxic. The world was beautiful; meat, eggs, and produce were available everywhere – but people were still just as rotten. Sol's crusty and tired, hanging on only because of Thorn. He's happy when Thorn brings him paper, pencils, and soap – weeping when he sees beef and wondering how men came to this. Sol studies the shocking Soylent reports in a back door meeting with his former contemporaries, emotionally showing both the audience as well as Thorn what is at stake even if he doesn't want to live in such a godless world where Soylent's secret solution makes frightening sense.

Tab Fielding can also read and write – unusual traits for his position in the era of Soylent Green, but Chuck Connors' (The Rifleman) bodyguard only remains loyal so long as his contract is paid. Fielding escorts the ladies to peruse the luxury inventory and has a decent apartment himself – including his own “furniture,” the svelte and strawberry eating Paula Kelly (Night Court). It might have been interesting if Soylent Green had focused more on this cool but ambiguous cucumber instead of other anonymous henchmen, for it's always entertaining to see these two Chucks go mano y mano. Unfortunately, police chief Brock Peters (Deep Space Nine) owns a rare watch that doesn't run – so much then for chastising his late officers. He dislikes when the aptly named Thorn won't listen, but Chief Hatcher knows he's a good cop. He tries to convince Thorn to walk away from this murder case thanks to pressure from the top, however, in this world, his word and trust in his men isn't good enough to assure their survival. Likewise high up but risky and unreliable Joseph Cotten (Hush...Hush, Sweet Charlotte) goes along with the pain when his company says it is necessary. He attends church and treats Leigh Taylor-Young's (Picket Fences) Shirl with respect, letting her shop and not abusing her despite his right to do so. Shirl comes with the apartment, and she'll be there for the next tenant whether she likes him or not, mere entertainment for his guests. While she does get into bed when Chuck tells her to get into bed, their relationship becomes one of freedom rather than force – a rare dalliance amid Soylent Green's patriarchal control.

The lavish apartments with sophisticated sliding doors and anonymous white science fiction infrastructure contrast the overcrowded slums and dark one room hovels cramped with simple cots, rare books, and older technology. Matte paintings are somewhat obvious and certainly the boob tubes are big because this is an old picture, however that back dated design also provides a realistic touch to the futuristic factories. The people at the bottom have no advances or access, and must peddle a broken bicycle to keep a tired generator going. Likewise, the police station looks as seedy and hazy as the downtrodden streets its men patrol. Bodyguards and officers wear khaki clothing and plain hats – subtly hinting at the mass produced, lookalike garments of a totalitarian regime. The classical scoring is so sweet, but the occasional swanky sexy music is corny, detracting from the bright luxuries versus homeless crowds that work well enough on their own. Fortunately, more often Soylent Green knows when silence or diegetic sound is best amid choice blood reds and well done violence be it congested strong men battles or round ups and rioting. The Soylent Green DVD provides commentaries and vintage behind the scenes shorts with Robinson tributes, but I want to have my cake and eat it too with more retrospectives to match the crisp and refreshed 4K viewing experience. Thanks to its iconic ending, it's tough to truly catch a virgin viewer for Soylent Green. However, this bitter pièce de résistance remains disturbingly relevant with its past parallels and eerie predictions providing plenty of food for thought.


Even knowing the big surprise here, Soylent Green holds up thanks to exceptional performances and well paced storytelling. This is not a horror movie yet has disturbing elements. It's science fiction but not a ninety minute action adventure and too fantastic to be a straight drama. Despite knowing the truth, those in control won't ruffle any feathers while the eating is good. They'll do anything to keep themselves cushy – especially at the expense of others. Soylent Green is a delicious parable blending all its genre elements to give us a taste of our own medicine.

Posted by Kristin Battestella at 12:49 AM