Steeped in gothic mood and bleak atmosphere, this trio of films past and present provides both period piece sophistication and slow burn horrors.

Black Torment – Black screen panting and tense chases through the brush with music to match every snapped branch and booted footstep open this 1964 eighteenth century ye olde horror. It's not a Hammer production, though it certainly feels like it with brutal strangulations, newlyweds in carriages, tricorn hats, bosomy frocks, and angry barons in powdered wigs. Heraldic notes and a lovely country manor house with grand columns and chandeliers belie the ornery blacksmiths, crippled nobles, and village tales of murder and violence. Sign Language is the only way to communicate, but the invalid can see and hear all the whispering servants, giggling maids, and witchcraft rumors – not to mention some casual innuendo about drinking and getting merry with the oh so fashionable butler. Ominous letters, cryptic family mottoes, eerie ancestral portraits, and footmen carrying the clearly pained but unable to object patient create tension amid noises in the night, a missing family bible, and suicidal history. There's romance but also secrets, screams, barred windows, and phantom ladies walking the grounds. Who's imagining what or driving one to madness? Despite obvious doppelganger red herrings, the mystery builds a sinister atmosphere with wheelchairs and evil suspicions while lingering recollections of a first wife provide Rebecca shade. Necking in the stables and townsfolk versus ruling gentry intensify as the seemingly law abiding local militia is also beholden to our baron regarding horse chases and murder accusations. Misunderstandings on a man said to be in two places at once escalate with tell tale ink, staircase frights, fainting spells, fatal revelations, and churchyard toppers. Slow spins, blurred images, askew angles, and up close camera shots of terrified eyes and sweating temples accent the out of control ill tempers and brain fevers while entertaining visions, muskets, and climatic sword fights set off the titular frights with a little foaming at the mouth for good measure. Although the dim, elusive print is in need of a good restoration, this sophisticated period piece pot boiler with horror pacing and flair is well worth the watch for mid-century gothic fans. 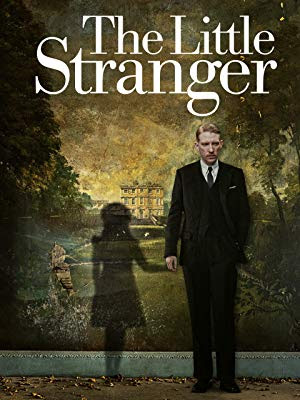 The Little Stranger – Lenny Abrahamson (Frank) directs Domhnall Gleeson (The Force Awakens), Ruth Wilson (I am the Pretty Thing that Lives in the House), and Charlotte Rampling (Zardoz) in this 2018 adaptation of the Sarah Waters novel. Post-war razors, old telephone ring rings, vintage lamp glows, and doctor bags set the scene before house calls to the lovely but overgrown country manor sheltering a burned RAF pilot and a fearful servant. Damaged plaster, a disused service bell system, quaint antiques, and a fine staircase provide former grandeur – our doctor's mother was a maid at Hundreds Hall before the 1919 parasols and garden parties last hurrahs. This fallen Old World charm versus Second war torn onward crossroad is firmly felt, and some cannot let go of the past. Layered dialogue provides the catching up exposition on family deaths, new medical treatments that could heal the wounded, and the once wealthy now like everyone else unable to afford upgrades and estate taxes. Our poor country doctor is more formal and button up in his suit, a stoic spire in the center of the frame interfering with family affairs or land sales when not spending holidays making their tea. Extreme, distorted, close up shots reflect his invasion of this space where the manor's past is still very much in the present, and his narration recalling a visit there as a boy parallels current events – he's “admitted” at the top of the stairs rather than waiting at the bottom, spoiled like a proper little gentleman, and made to feel like a part of the house. Mirrors and careful editing reflect the intermingling while the forties gowns inspire a past within the past trying to recapturing that pre-war class feeling. Awkward parties mixing old philosophies and new pretentiousness begat sudden dog attacks, blood, and screams. Real life troubles, barely understood shell shock, and fears that there's something in the house that wants them dead affect everyone's state of mind, and although our doctor has new opportunities in the city, viewers wonder if his dancing and romancing the daughter is just to complete his mastery of the home. Everything is happy away from the leaky house with knocking sounds, disturbances in the night, and names of the dead inscribed on the walls yet he wants to stay while she's ready to leave once the bells ring by themselves and old speaking pipes echo from the nursery. Many incidents are told rather than seen, which adds to the psychological versus supernatural mystery as more of the manor is explored. After such hear tell subtlety, the scares are more intense when they do happen – slamming doors and desperate pounding are traumatic for the person experiencing the out of control malevolence. Are the ghosts and poltergeists real or merely hysterical women in some collective episode? Memories and self harm escalate to emergencies in the night, fatal falls, ghostly interventions, and who can't or won't let go extremes without the need for anything over the top thanks to fine performances and period touches. This may be slow for some but the characterizations and drama don't rely on run of the mill in your face scares. Elements left unexplained create discussion, and this should probably be watched twice for the subdued setting of the scene – which is perfect for audiences that don't expect chills a minute and can enjoy a simmering sense of dread.

Lizzie – Maid Kristen Stewart (Twilight) gets steamy with the titular turn of the century murderess Chloe Sevingy (American Horror Story) in this 2018 biopic accented with fine costumes, rustic lighting, and vintage Victorian interiors. Six months before the screams and blood, the buttoned up, repressed daughter is already defiant against the patriarchal oppression by going to theatre parties unaccompanied where low cut, colorful frocks contrast the tight collars and immediate sexual tension at home. The Bordens can't have anything too extravagant despite being able to afford it, and Lizzie prefers the barn and animals to people, reading aloud in an innocent but antisocial loneliness. While some dialogue is a little too modern, our eponymous lady has a progressive, forceful, even masculine energy that can't be contained with fainting spells. Our old maid is called a lesbian abomination but in turn rightfully calls her perverse, abusive father a lying coward before creaking floorboards, broken mirrors slid under the door, revenge injuries, and burned documents reveal the truth. The up close camera often peers through the window, catching the glances as each lady looks at each other – the audience is in on the intimate possibilities but when your employer suggests his servant leave the door to her hot attic room open, she can't exactly say no. The strict orders and behind closed doors implications are uncomfortable enough without the often seen exploitative, degrading visuals, and the women bond during intimate undressings and corset tightenings. Theft and rebellious acts increase amid suspicious business deals, threatening letters, and whispering relatives. The women have to eavesdrop to learn what the men are planning for them before violent punishments and one and all sitting at the dinner table like nothing has happened. Is murder the only way out of the hypocrisy? Were the violent tendencies always there or could you be crazy in love enough to kill? The ax is shown throughout the pot boiler, and although the stifling camerawork may be disorienting to some viewers, it mirrors the closeness when it is both welcomed by the women or invaded by nasty men. Regardless of height the unprotected ladies must look up to the creepy uncles, diminished and fearful of physical violence. Retro photo pops accent the bludgeoning editing before jail and witnesses on the stand provide the fallout from this infamous hatcheting. Premeditated accomplices, church bells, deliberate nudity, and out of control horror are worth the wait once the finale reveals the symbolically sexual posturing, vomit, and splatter. Some people just don't have the stomach for this sort of thing while others so smooth have thought of everything. There is some unevenness with the characters – probably from when the project was envisioned as a television piece with bigger roles – and the killer romance meets Victorian women's lib messages are mixed. However despite liberties suggesting what went on in this congested house and a decidedly quiet, not mainstream style that won't be for everyone, this interesting perspective will have viewers studying this disturbing murder case with a sympathetic, personal anew.

Posted by Kristin Battestella at 11:49 PM