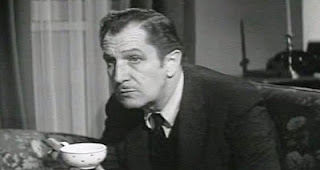 It is important to spread the viewing love to all the Titans of Horror year round.  Fortunately, Vincent Price made many a scary film for us to enjoy!

The Comedy of Terrors – This 1964 blend of humor and creepy reunites Big V with Boris Karloff and Peter Lorre (The Raven) and Basil Rathbone and Joyce Jameson (Tales of Terror) - and oh, can Price feign that sympathy as a stressed and struggling undertaker!  Lorre is wonderful as OMP’s little assistant Gillie- the pair is almost vaudeville in their interrupted wrong doings and ironic conversations.  It’s great to see everyone- usually so serious and refined- having a good time. Yes, it’s campy and over the top- but the cast makes the humor amid the horror acceptable.  We like to see them poke fun at themselves- Lorre bothering to open a cut out door to make his exit or Rathbone’s crazy and wonderfully windblown quoting of Macbeth amid his mistaken bouts of catalepsy! Writer Richard Matheson (Legend of Hell House) keeps the wit on form for the performances, and the smartly timed funerary gags and physical comedy work perfectly with director Jacques Tourneur’s (Cat People) use of high speed film, distorted organ music, and Jameson’s fun off key opera.  There’s a sense of Victorian carnival and flair amid the darker tone and open, stage-like atmosphere. Obviously, this set up is not meant to be super scary and some audiences may not like the toe toward slapstick, but there are some juicy and fearful pursuits in the final act. All the spooky of similar films is here along with some self-awareness and solid entertainment. Karloff’s clueless old man is worth the price (hee, no pun intended!) of admission alone.

Dr. Phibes Rises Again! – A silly but fun narration recaps The Abominable Dr. Phibes as we speed up 3 years for the expected bizarre, over the top music, demented humor, and far-fetched resurrection plots in this 1972 sequel. Though not as colorful or flashy as the original, the blend of old school abstract, anachronistic flair, seventies art deco sets, and freaky, stylized deaths is mighty fine. The distorted editing can be either positive for some or negative for others- but there’s plenty of suspense, archaeology adventure, psychedellia, and a double demented love story to keep things fun.  Robert Quarry (Count Yorga, Vampire!) is nasty good with some twisted parallels to Price’s undeniable Phibes, Peter Cushing (Brides of Dracula) is a sharp surprise in his cameo, and replacement assistant Valli Kemp has a lot of silent hijinks and fun get ups. Yes, there are fewer scares and revenge and some sequences are low budget subdued, but the audience doesn’t necessarily need to see the first film, either. Unfortunately, I really don’t know why AIP didn’t continue with further sequel plans.

The Fly – VP supports his brother David Hedison (Live and Let Die) and sister in law Patricia Owens (Seven Women from Hell) as the subdued straight man to the sweet, 1958 colorful, high tech, mad scientist lab hysterics here.  Though the French angles are limited to a few names and words; other fine touches like buzzing in the scoring, mid century décor, and debates over science versus religion, the sacredness of life over human intelligence, and the horrors of meddling with it all keep this version fresh. Early talk of teleportation and transporting food ideas and how they could solve world’s problems still say a lot, along with the fun and dang decent-if loud- special effects.  I never knew there was so much suspense in catching a little fly!  Even if modern audiences may find this film tame or hokey now in comparison to Croneberg’s remake or other contemporary science fiction horror, there’s a great build up of hidden what you don’t see to the insect reveal- and the fly work still looks good.  Distorted bugview camerawork and tiny shockers just do wonders:  ‘Help me! Help me!’ 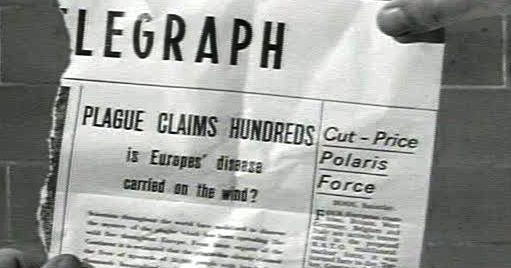 The Last Man on Earth – A wonderfully subtle and largely solitary performance by Vincent Price anchors this 1964 debut adaption of Richard Matheson’s novel I am Legend. The voiceovers and somewhat comical undead might be tough for some, but the focus on melancholy and slowly degenerating delivery works with the post-apocalyptic depression and isolation. Of course, the plot isn’t all silent and alone- flashbacks detailing the genesis of the vampire-like pestilence and the subsequent collapse of family break up the despair nicely.  Unlike the bigger scope and action of Will Smith’s recent I am Legend or the seventies garish of Charlton Heston’s Omega Man- both good in their own right- the time here is better spent on the intimate and personal in examination of self and society.  The simplest need for companionship, the arrogance of man, humanity’s stupid short sightedness- really, I don’t know why Matheson was displeased with the final result here.

Shock – This 1946 medical murder mystery is more a suspense tale than straight horror, but the twists and scares are definitely here. An early and fun dream sequence also smartly uses scale, camera zooms, and focus tricks to play with the minds onscreen and the audience’s perceptions of it all.  Anabel Shaw (To Hell and Back) is unfortunately a little too of the time hysterical, and the plot may seem too Rear Window-esque in its witnessing.  However, Our Man Vincent is so young and suave, with a slick but not yet raspy voice and a lot of angry and bad doctoring style.  Oh, what lengths his psychiatrist will go to for the sexy nurse Lynn Bari (Nocturne)! But I shall say no more…

The Tingler – Director William Castle (House on Haunted Hill) bemusingly warns the audience of his latest theatrics of the day to open this 1959 parasite horror funfest and assures us it is okay to scream! Yes, the attempt at sexy film noir stylings for Patricia Cutts (I Was a Male War Bride) is hokey, but Judith Evelyn’s (Giant) mute and silent scares do wonders along with great uses of color- yes color- in a black and white film. The blurred lines between the onscreen silent movie house and the then theater experience are also kitschy good, with Big V almost playing a film within a film event when the screen goes black.  In fact, with the right set up and approach, this tactic could still work in the cinema today- and be far better than all the headache inducing 3D. Price, of course, is just a little too nonchalant about doing an autopsy isn’t he?  It’s so creepy the way he investigates fear from the mind and shock on the body as if it were no big deal to experiment at the expense of others.  Certainly, the idea of a tingly worm on our spines festering on our fears is totally preposterous- but Price sells it and the camp of it all wonderfully.  Really, when a film uses LSD as part of the plot, we can’t be expected to take the science too seriously.

(At least he still has a record player. Whew!)

Posted by Kristin Battestella at 6:29 AM

I heard of Shock and from what I read, it seems like it';; be a good watch!

Yeah, a lot of Price is overlooked I think, and I have more to come.

Shock was better than I expected indeed. I think it's available on a few public domain sites as well.

i love 'The Tingler'. its silly and soooo cheesy, but i still love it. 'Dr. Phibes Rises Again!' is disappointing when compared to the original, but it has its moments. don't believe i've ever seen 'Shock'.

Yeah Tingler is a riot. Phibes 2 yeah has its out there bits for fans, but it does seem like the behind the scenes troubles really shortchanged what was onscreen.

Wow, it seems nobody has seen Shock!


Although it looks like the rest of these treats are not there anymore, bummer.