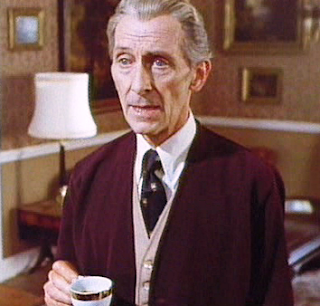 Yes, he stands there in Star Wars as the Death Star blows up rather than evacuating in their moment of triumph. However, in my recent re-watching of a slew of Peter Cushing horror treats, I’ve again concluded that young or old, good guy or villain, Big P is a filmmaking pimp!

Dr. Terror’s House of Horrors – Can you imagine being in a train car with Christopher Lee, Donald Sutherland (Invasion of the Body Snatchers), and Peter Cushing? Director Freddie Francis (Dracula Has Risen from the Grave) and Amicus Productions have done just that in this 1965 anthology.  Cushing is downright creepy- as in, you would cross the street when you see him and most definitely not want to share that train car with him creepy. The first two tales, “Werewolf” and “Creeping Vine” are a little slow to start, even confusing, and look somewhat drab with poor effects. Fortunately, the wolfy revenge angles, family scares, and freaky vegetation anchor the bizarre.  There also isn’t a lot of charisma from the banal random players - except for Bernard Lee’s (Goldfinger) ominous cameo- or any uber scares for that matter. Plot Three, “Voodoo” goes for some humor and has some great jazz music, but you have to really like the wit or the tunes to fully appreciate it.  However, when things get freaky with some good old howling wind and darkness, it’s magical.  And wow, PC’s partner in crime Lee is totally funny as a stuck up, almost nerdy tarot disbeliever- it’s just so great to see him against his dark and deadly type.  The late Michael Gough (Batman Returns) joins Lee for “Disembodied Hand” and, well…these final segments make the movie. Sutherland’s concluding “Vampire” story is a little obvious, naturally, but it is still a whopper, upping the scares and adding feminine twists- of which, I shall say no more.

The Flesh and the Fiends – Somehow, I find it strange that writer and director John Gilling’s (Shadow of the Cat) 1960 take on the oft-told Burke and Hare grave robbing infamy is in black and white.  Am I that used to seeing Big P in color?  He looks young, but twisted and slightly warped indeed. Cushing’s upstanding and intellectual medical professor Dr. Knox debates that it’s okay to study a body plucked from the coffin because the soul has already left it- if such a soul could even be proven anyway! His speeches are slick and in his mind justify the gruesome actions committed by Donald Pleasence (Halloween) - who’s practically a pup here!  A seriously modern viewer might not even recognize his juicy badness amid all the perfectly escalating crimes, scary deaths, and touches of humor with a freaky George Rose (Pirates of Penzance).  However, I suspect all horror fans to know Billie Whitelaw (The Omen) when they see her!  The waistcoats and big bowties look great, along with late Regency poufy ladies’ sleeves, huge bonnets, and those primitive medical toys. Though the DVD doesn’t have subtitles, which makes some of the soft dialogue or thick Scottish accents tough, the disc offers the alternate Mania title sequences and both a tame Brit and boobilcious European cut of the film. See, black and white boobs- that’s also a new sight for me.

Night Creatures – Oliver Reed (Burnt Offerings) and Yvonne Romain (also The Curse of the Werewolf with Reed) co star in this demented 1962 high seas adventure perhaps better known as Captain Clegg. Once again, credit to OMP’s pimpness that he can be believed as a zestful little minister and seemingly unassuming parson among all his varied and twisted roles.  Then again, we should know better!  The 18th century tricorn hats, historically sweet costumes, and mixed uniforms are lovely as well- simply because we don’t often see such naval style in a horror film. This political intrigue with a touch of the supernatural feels like Hornblower ala Hammer, and the blend works well on both fronts. Yes, these angles could have been stepped up a bit more to further take advantage of such a unique mix, but we also don’t have many films with this spooky seafaring combination either.  Although the ghostly and shadowy effects look a little dated, it all still works the freaky just fine.  We don’t see the titular haunts that often, however, and some story elements may seem a little obvious now. Fortunately, the mystery and secrets are allowed to stew, keeping the creepy suspense getting good for the finale.

Twins of Evil – Another horror gem that goes by a dozen different titles and is tragically near impossible to find! Lovely playmates Mary and Madeleine Collinson join a zealous witch finder Cushing in this 1971 pseudo sequel prequel to The Vampire Lovers.  Even if the ladies may seem young or look a little too seventies ingénue to start, they are simply dynamite in their matching frocks and do fit the colonial style. Without subtitles, the accents and dubbing might be iffy for some, but so what.  It might also be tough to tell the girls apart initially, but bad girl Frieda makes herself known against good twin Maria, and the audience is treated to mistaken identity suspense, decent effects, and some sensual scares.  And oh, how Big Pete rocks that puritan look! He’s scary strict yet charismatic in his persecutions and latently kinky in beating and burning pretty girls. Cushing raises the evil fears and witchy terrors amid the vampness along with the slick Damien Thomas (Jane Eyre) as Count Karnstein. Who’s more the villain, the count who makes no secret of his bloodthirsty practices or the ringleader who burns the innocent?  Though juicy, some of the plotting here doesn’t make sense if you think too hard, for writer Tudor Gates (also Lust of the Vampire) may stray too far from the film’s predecessors and the Carmilla novel. Nevertheless, there’s great blood, boobs, black candles, and rituals to enjoy, along with a fun Katya Wyeth (A Clockwork Orange) appearing for Mircalla’s rising and seduction scenes.  Stroke that candle girl!

Posted by Kristin Battestella at 4:03 AM

Although there is a subscription fee for Hulu Plus, The Flesh and the Fiends is currently available!