Frankenstein, Dracula, and One for Good Measure
By Kristin Battestella
It’s a debate for the ages in the battle of the Titans of Terror!  Frankenstein or Dracula? Cushing or Lee? Lee or Cushing? Who’s the better bad guy? Who’s the better good guy?  Here are a few more trouble inducing questions and some answers in the dual horror juiciness.
Dracula: Prince of Darkness –  This Terence Fisher helmed 1966 sequel opens with a revisit to his Horror of Dracula and adds fun Victorian via sixties ladies, freaky servant Philip Latham (The Pallisers), action monk Andrew Kier (Cleopatra), candlelit ambiance, and sweet velvet décor.  There’s actually a touch of the novel as well, with hints of Renfield and visiting English twists- except our Carpathian guests are two couples this time around. Barbara Shelley (also of The Gorgon) makes a great scaredy cat who would be annoying except that we know somebody should take heed in a vampire picture! Besides, it’s always the good girls like Suzan Farmer (Die, Monster, Die!) who go so bad for Dracula! Even though we know a resurrection ritual is coming, it’s still bloody impressive- literally and figuratively. There’s a great sense of foreboding fear with scary music as Lee silently hypnotizes and takes the dames as he wills in what seems like less than 10 minutes! I know he did some of these films under protest and had conflicts over the dialogue, but Dracula need not speak to be badass either. OMC’s great strength, overbearing physicality, and evil red eyes more than fit the terror bill.  It’s actually fitting that there are no wither tos and why fors- just a silent, powerful, unstoppable menace. We don’t have outright nudity or such for this round, but the vamp approach and violation works. 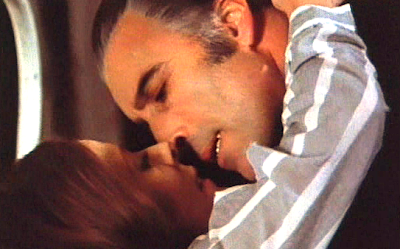 Dracula Has Risen from the Grave – A sweet, bloody, almost Bond-esque introduction and a fun opening shocker lead off the revenge plotting, suspenseful carriage chases, surprising character development, saucy bedroom scenes, religious twists, and rooftop pursuits in this 1968 sequel. Whew! It’s quite intriguing to for once see what would possibly happen after Bram, as we instead focus on Monsieur Rupert Davies (Maigret), priest Ewan Hopper (Julius Caesar), and the terrified village folk who all still live in the shadow of Big C.  We actually see more of Lee as Dracula earlier on in the film, and this time he even speaks!  Well, it’s only about dozen lines and we still don’t really have enough of the eponymous villain, but Sir Christopher has more to do here. Dracula is quite sensual and kinky; all these necks and bosoms just thrust right at him!  Though filmed well, the production values seem a step down from the usual Hammer high style, and the women seem a little too sixties designed instead of the late Victorian onscreen. Young Barry Andrews (Blood on Satan’s Claw) is also too hepcat annoying, as is bad girl Barbara Ewing (Torture Garden) to start- but we know Dracula will educate her- a bite, a beat down, a catfight! Yes, the titular revival is a little preposterous, but its also pretty creative- even if the vampire rules, times, and places established in the first two films are fudged up. The horror sound effects are great, along with impressively eerie green glow effects and colored lens tricks. It does indeed look like death here!
Frankenstein Created Woman – Pimp Cushing returns to his titular villainy for this 1967 sequel of sorts co-starring Susan Denberg (recognizable from the original Star Trek’s ‘”Mudd’s Women”) as his conflicted but deadly creation. The resurrection of the slightly more tender Baron thanks to his henchman Thorley Walters (The Adventures of Sherlock Holmes’ Smarter Brother) and Robert Morris (Quartermass and the Pit) is almost mythical, as is the suggestion of his work delving towards black magic or sorcery in the quest for higher understanding.  The philosophical concepts, cruelty, legal injustice, and soulful debates add dimension and horror depths. What happens to love, innocence, and inner beauty when a tormented soul is given a pretty new body? The Victorian stock and demented laboratory look great in establishing the radical and unethical experimentations, too.  In addition to great guillotine suggestions and smart uses of red wine symbolism and color, there’s some sweet murder and suspense brought forth by the almost ghostly crossover vengeance.  While some may find the plot too abstract or even goofy, the big scary questions that come with science going to far work beautifully with the period creepy. Scientific reincarnation, horror, spirituality- all in one Hammer delight! 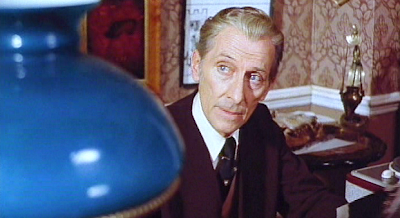 Frankenstein Must be Destroyed – Okay, there are more series inconsistencies that might hamper this 1969 outing for some; in many ways, it seems like the Hammer Frankenstein films were themselves released out of order, go figure.  The derelict laboratory scares, lady screams, and medical thrills here are darker, more sinister, and brutal compared to the previous installment indeed.  Cush is totally freaky this go round- nasty from beginning to end with an acerbic delivery and vehement action both for and against coerced accomplices Simon Ward (Young Winston) and Veronica Carlson (also of Dracula Has Risen from the Grave). How could such a charming little old man play such a saucy bastard? Shudder.  The visual mix of finery, top hats, and spats clashing with dirty acts and bloody surgery send the period fine furnishings and Victorian protocol on its ear.  Returning director Terrence Fisher (must I?) keeps things very intense, well paced, and properly played for a complete science horror ride.  Cocaine use, ethics of medicine, lunacy- with all this juice, it’s easy to say to hell with film continuity!
The Gorgon – Patrick Troughton (Doctor Who) joins Our Men of the Hour as Terence Fisher directs this 1964 Hammer blend of ancient mythology, post-Victorian science, and a good helping of the expected creepy.  Shades of Medusa, a little bit of illicit juice, on form decrepit castle sets, and sharp costumes up the ante- along with suspicious doctor Cushing looking so suave in a 19th century reverse goatee.  Lee is also great fun as the crusty, but fatherly and supportive professor- and talk about a mustache! Yes, you read correctly; the boys have switched things up here, and it is dang fine!  Unfortunately, the gorgon design is nothing to write home about- you barely see the titular fuss- and some of the nighttime photography is too dark.  The DVD is a bit elusive as well, but worth the pursuit for this little trickster. Who knew?
You may have noticed that in all my Horror Heavyweights and Hammer List adventures, I have not yet reviewed Scars of Dracula or The Revenge of Frankenstein.  Unfortunately, these two are sacrilegiously and inexplicably not available from Netflix and remain elusive elsewhere.  Typical.  For that reason alone, I imagine you should hold on for dear life if you find them! If you could choose, that is, between Dracula, Frankenstein, Cushing, and Lee.  I still cannot!
Posted by Kristin Battestella at 11:37 PM

At least I'm getting some good use out of all those Satanic Rites of Dracula screencaptures!

Dracula Has Risen From the Grave has got to be my favorite Hammer I've seen so far. The side characters actually didn't annoy me as much as I expected, and Lee putting the bite on Carlson was beyond heated.

I only wish Scars of Dracula was available on Netflix. I hear it's a stinker, but Lee gets more screentime and more lines than in any other Hammer Dracula movie. I also wish Lee and Cushing had been in even more Dracula movies together. I suspect Cushing may have been the better actor on a technical level, though nobody can beat Lee when it comes to presence and, well, evil undead sex appeal.

And thank you, thank you for the Satanic Rites caps; that top pic had me swooning in the most fangirlishly annoying way imaginable. Great post!

Wow! Laura! I'm so sorry I didn't see your comment sooner! I'm usually so quick at responding to lovely words. I only came to browse my Hammer lists again as I am reviewing yet more!

When you watch Lee and Cushing together,perhaps especially so in something so seemingly low and crappy that turns out so dang good, it truly does make you wonder what onscreen scares and genius they could accomplish today!

I have to find the rest of my Satanic Rites caps again, too.

Thanks for stopping by! I'm so sorry I missed you!