Horror So Bad Its Good!


Well, in the midst of all this horror viewing, one is bound to find some bad and ugly amid the good and scary! Some of these mid-century science fiction horrors are cult classics, but others thru the years carry just a hint of iffy. Does a film have to be good to be entertaining? Nope. 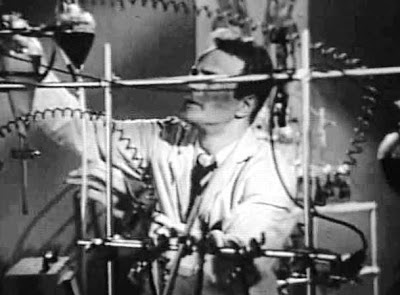 Atom Age Vampire – This 1963 Italian hour and twenty minutes offers eerie effects, good music both swanky and sinister, and plenty of mood, sauce, and juicy disfigurement!  Yes, the dubbing is obvious, it’s tough to understand all the dialogue, and some of the acting is over the top in the of the time and foreign styles. Some of the technology might be confusing, and outside of an allusion towards a new kind of scientific immortal killing prey, this English title doesn’t mean much. The quibbles, however, are tolerable.  Most of the performances are fine, and the mad scientist themes work thanks to fun lab sounds and designs. The violence, murder, and corrupt sciences aren’t bad either. The human love triangles and steady plot and pace are still relatable, creating a decent little picture that takes itself a little more seriously than the B, borderline campy 50s American SF. Fans of mid century scary sci-fi can most definitely enjoy this step above all around.

The Beast of Yucca Flats – The notorious 1961 SF horror here starts off fun and scary with a toweled pretty, strangulations, space race secrets, communism fears, and nuclear fallout. Unfortunately, this hour is held together by a very dodgy narration which unnecessarily replaces what should be dialogue. It’s mistake numero uno- hardly anyone talks and this makes for the least amount of character development possible. No performance happens; it’s a story being told. While that’s fine in cartoons perhaps, aren’t you making a film because of the show don’t tell possibilities? It’s unrealistic to expect a serious science fiction or spooky adult audience to sit through something like this-which is as is really nothing more than a naughty children’s short. That’s Rule 2: don’t underestimate your audience.  Did I mention the music is also much too much? Yes, this ‘film’ is seriously flawed, and to some, that is its very appeal. Fans who enjoy the hokey of the day will love the cars, pace, and weak fifties filmmaking style, and drinking game fans can have a wonderful time with the utterly fake shoot out and car chase.  It’s like they’re kids with pop guns spinning the wheels of parked cars!  This one must be seen to be believed, indeed. 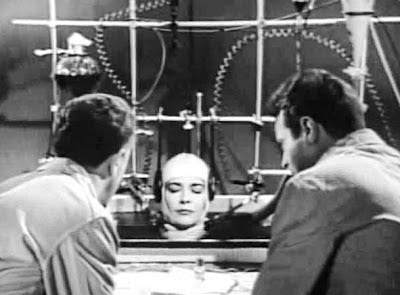 The Brain That Wouldn’t Die – I’ve seen this black and white 1962 AIP SF horror romp heckled a time or two on Mystery Science Theater and Elvira’s Movie Macabre. Honestly, the title alone harkens a certain level of the absurd! A talking head in a dish, literally.  A laughing, vengeful, telepathic head in a dish, oh yes. Modern audiences can still be entertained and enjoy the hokey scares thanks to the bubbling laboratories, cool fifties cars, and dangerous outdoor scenery. Decent doctoring segues towards mad scientist mayhem, and the swift editing is frenetic with desperate music to match. Kinky dancing and swanky tunes, naughty talk about replacement bodies, catfights, hot dames, and lots of leg all add a scandalously fun element, too.  The serious tone does hamper the camp, the finale is completely contrived, and the full 80 minutes feels overlong despite the ticking clock onscreen. Yet all things considered, this one is the very definition of so bad its good ridiculous.  Have your own bemusing, beverage-laden Halloween peanut gallery party with this one. 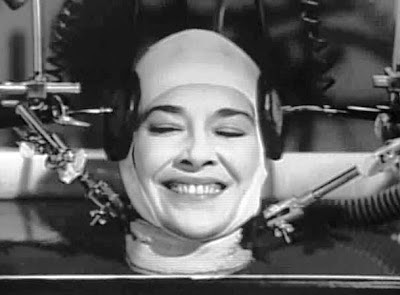 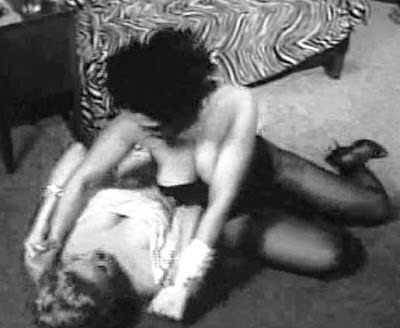 (...and the auditions for her new body!)

Eaten Alive – I thought this film on my 50 Horror Classics Set the was infamous Italian cannibal rape fest, which made me a little apprehensive about watching. But no, this 1977 Tobe Hopper (Texas Chainsaw Massacre) creepy jumps right into the nasty with Robert Englund (Fred Krueger!) giving Roberta Collins (Death Race 2000) some real world sex and violence scares. There’s a fun appearance by Carolyn Jones (The Addams Family), too, and Neville Brand (Stalag 17) is totally demented and deranged indeed. The wickeds are almost too much to watch, except the photography looks so poor in quality and backwater dirty that the viewer can’t see what’s happening amid this dark and dank- if creepy- design. Chainsaw veteran Marilyn Burns also spends most of the time tied to a bed with naught to do, and between the gory scenes, the pace is stagnant and insipid.  For this 87 minute edited version, it feels as though both some panache and an editing scalpel are needed.  The country music blissfully playing amid kids crying and killer sex scenes is more quirky twisted than scary as perhaps intended, and what should be a very frightful film fizzles into being just, well, kind of dumb. Why start out so slashery good to end up being a killer crocodile picture? Maybe one shouldn’t compare to the magical of Texas Chainsaw Massacre, but the well seems muddled here.

The World Gone Mad –This hour plus murder mystery from 1933 looks, feels, and sounds old thanks to the low budget period décor, fast talking colloquialisms, and the early styled pacing and editing.  And yet all that is a real treat for those who like to see tilted fedoras, fabulous frocks, plenty of cigarettes, and a candlestick phone or two- not to mention a very young Neil Hamilton (Commissioner Gordon from the Batman TV series).  Oh, the typewriters and phone operators! The main investigation plot is a little too tough to follow at times, which is a major problem in such a short film, and time is wasted on a little boy that I swear looks exactly like Shirley Temple! Outside of the ironically lovely and nostalgic visuals, one might wonder what the point was here, even if the crime chase gets better as the film proceeds. It isn’t scary or that mysterious, but one intense train sequence might make the film.  I’m torn. It’s flawed, but looks good. Confusing, but entertaining. 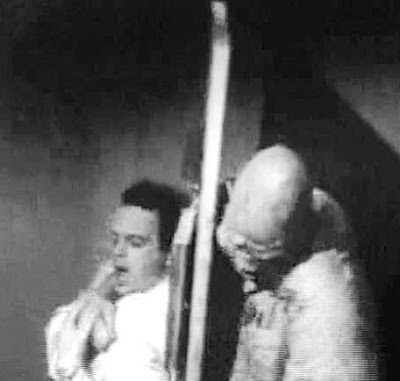 (Yeah, attacking someone thru a door that isn't attached...)

Posted by Kristin Battestella at 2:31 AM