From old school cult thrillers and screaming college coeds to some slicing and dicing thespians and killer hobbits, this quirky quartet provides plenty of gore and girls for fans of the slasher genre. 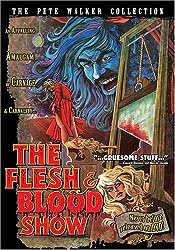 The Flesh and Blood Show – An old time, put on your glasses 3D warning opens this 1972 British saucy before naked chicks– err “flat mates” get out of bed, answering the door in the middle of the night whilst still unclothed. Fun film within film plays on the title follow along with a cool abandoned theatre, waterfront pier dangers, creepy props, and off camera screams. Yes, many scare gags obviously hinge on these people not knowing they are in a horror movie – sardonic and hip to the times as they may be. The cave girl outfits and black leotards may seem exploitative, too, but hey, the ladies help each other out of their costumes while the lads watch! Who needs subtitles, right? Great congested camerawork ups the scares as the slowly realizing and pairing off players argue with disbelieving authorities and fishy locals. The lines between stage and screen blur further, and despite an assault scene that may be tough to watch for some, most of the violence escalates without much blood or gore. Red herrings, twists, suspects, a whiff of Shakespeare, and a mysterious stage producer send home the low budget but pleasurable shadows and deaths with a smooth black and white finish. After all, as they so bluntly put it here, “If it wasn’t so bloody tragic and horrible it could almost make a movie script…”

Maniac – Caroline Munro (The Spy Who Loved Me) joins writer and star Joe Spinell (The Godfather) for beachy kills, prostitution, hot pants, and plenty of dirty nostalgia in this 1980 low budget slasher. The New York shady setting, hints of Christmas, disturbing dolls, misused mannequins, and sexualized violence add to the sweaty, gross mood – not to mention the vomit, scalping, blood, and brains. Big old newspapers and dark room development make for more period piece fun, but the late seventies fashions and edgy eighties photo shoot contribute to the drive by cheap production values. Though the very brief nudity and little harsh language belie the explotation tone or may feel tame today, the conflicted perversions, talking to oneself over the killings, and a childlike stunted warp accent the gruesome shot gun blasts and not for the squeamish murders. The editing and pace, however, do feel uneven – going back and forth between stylized murder scenes and quiet, demented psychosis. Thankfully, this focus on the killer's perspective and the icky source of his depravity is unique for this genre built on the hero being the victor. The variety of deaths is also quality, with a mix of premeditated preparation, somewhat random victims, and a choice of weaponry. Hiding in a subway bathroom to avoid being killed? No, that's not the best course of action! The thin script doesn't do much with its vapid victims and the finale is a tad confusing, but fortunately, the inner killer point of view makes for an interesting character study. 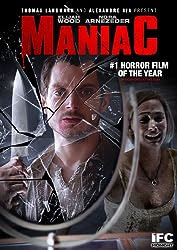 Maniac – Lord of the Rings star Elijah Wood anchors this 2012 remake with intriguing, murderous perspectives and heavy breathing to sell the stalking, predatory mood. We only see our protagonist via the rear view mirror or other reflections, and it's almost as if he himself is filming what we see. Camera pans up and down and up close zooms on the ladies show his attraction and blurry, frenetic frames harken panic attacks or resisting the urge to kill. White knuckles on the steering wheel and a dirty windshield add to the depressed intimacy, and the unique camera design remains a personal analysis on the psychosis rather than something akin to the found footage gimmick. The underlying social commentary of this unreliable, warped viewpoint is also interesting – what's art? What's a little too weird? Does the photo lens show the truth or how we perceive life as colored with our own issues? Maybe it really is the seemingly sweet quiet ones that are the unnoticed but disturbed among us. How many seemingly strong, independent, modern women walk the streets unaware they are being stalked? Ava Maria music hints at the twisted root along with some uncomfortable flashbacks, and though it might not be meant as humorous, I had to laugh at the bug spray. It's tough to keep scalps fresh these days! Some of the otherwise fine but graphic blood, knives, and poor man's scalpings are borderline CGI obvious or excessive at times, and onscreen dating sites – though fitting for today's creepy pick ups – will be dated soon. Thankfully, refreshingly un-cookie cutter women, nudity, and a frank showing of sex and penetrating violence add to the unique film making and stay just this side of unnecessary gross. 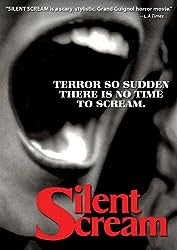 Silent Scream – A slow motion police raid starts this 1980 slasher along with atmospheric music, askew angles, and quality blood splatterings. Late seventies college cool and an isolated old house – also seen in Spider Baby – further set the scene with deceiving nostalgia, a creepy walk up attic, dusty antiques, World War II motifs, and Victorian maze like sinister. Imagine turning the knob on that big boob tube! For sure, some of the plot is cliché – there are unaccounted for occupants, a chunky best friend, seaside perils, the spooky laundry room in the basement, and free love possibilities. Fake jump scares, bad date fears, and unseen killer stabbings, however, make for then-new genre staples. Great intercutting and editing accent the murders, yet there isn’t an excess of gore overtaking the smart slices or violence. An excellent Barbara Steele (Black Sunday) introduction, the spooky old lady perfection from Yvonne De Carlo (The Munsters), and the likeable Rebecca Balding (Soap) add to the heavy as the 90 minutes mount and family secrets come to light. The police investigation is touch and go, and today this isn’t that scary, but a commentary and over an hour of retrospective interviews discussing a unique behind the scenes situation adds some slasher conversation. Maybe this isn’t perfect by contemporary standards, but this little number does everything it is supposed to with entertaining twists and a crazy finish.

Posted by Kristin Battestella at 1:25 AM