Shakespearean thespian Kenneth Branagh produces and stars in the 2008 British television debut of Wallander, based upon the Swedish novels of the same name from author Henning Mankell. Now, Swedish is truly Greek to me, but despite a solid literary pedigree and prior Swedish television adaptations, this trio of 90-minute episodes packs some contemporary suspense and delightfully bitter detective examinations for English speaking audiences.

The disturbing, fiery suicide to start Episode 1 “Sidetracked” quickly introduces audiences to a melancholy, downtrodden police existence, and Wallander provides a universal realism with bizarre deaths and relatable, depressed, strung out investigators piecing together the serial killer crimes. Although the Swedish setting is not immediately apparent thanks to the British forefront, names and places, blue and yellow flags, and newspaper hints do subtlety suggest Wallander’s Scandinavian roots. Pleasing investigative touches, media interference, and corrupt politicians go hand in hand with squad room dynamics, layers of mystery, and an ever-deepening scandal. Sure, there are the usual cop show tropes or common lines of questioning – “Does he have any enemies?” – however, the flawed, in over their heads detectives tie the abuses, dirty details, and cover ups together in a well done examination accented by artistic elements and fathers and sons analysis. The personal touches and focus on the people and not necessarily the case balance the twisted criminals and well edited, suspenseful killings – we almost don’t blame this killer of killers for taking out the trash thanks to all the gray complexities. Terrified witnesses, surprising clues, and the highest corruption all come together for an intense finale.

Now that we know Wallander’s bleak style, Episode 2 “Firewall” gets right to the bloody crimes, seemingly random stabbings, and young delinquents with attitudes that say something more. Contrasts between the killer mentality, disturbing violence, and innocent pink bedrooms reflect the personal amid the crimes and witnesses, and it seems divorcées and grieving families are no better or worse than our titular copper. Naturally, with a title like “Firewall” one can deduce the technological terrors amid the personal here. Online technology, power outages, security failures, and computer troubles are both a help and hindrance in life or investigation – our reliance on machines assists in the criminal activity or tosses a wrench in the case. Such contemporary technological statements may not be as thematically disturbing as the abuses and violence of the first episode, but the topics are handled better than American detective dramas where a team of heroes has everything resolved in an hour. While it sometimes seems very impractical – how do these people never have backup?! – Wallander’s handful of cops must deal with everything in their jurisdiction. They are under the gun, cases crisscross, and my goodness, bodies mysteriously leave the morgue!  More family parallels and heavy backstory unfold, but Wallander tells the intersecting oddities of life and investigation in an ironic, linear fashion, smartly allowing the catastrophic clockwork to simmer and sneak up upon the viewers.

“One Step Behind” opens with a deadly costume party, and some are handling the situation better than others are. Family may move on but some take the ultimate way out in this third episode and the squad room deals with internal heavies as the cases go on. Cops must trust each other with their lives, but do they really know one another? Wallander takes more personal time here to reflect on the job and state of not so well being with therapy sessions and an investigation of self. Less music, innate silence, and diegetic sounds add emphasis to the emotional parallels, ill health, and regretfully missed clues hidden in plain sight. What if one person thought you were his best friend and you never even noticed because the case was always more important? Seemingly random moments or supposedly separate plots interweave well on Wallander, and no fluff camerawork is needed when mistakes are made and the tale is told like it is. Where stateside shows are 40 minutes with precious little time to mount a case – much less a pause or go over the breaking point – this serious, pensive 90-minute finale does much more than a big shoot ‘em up blowout spectacle. There isn’t a reset button or a chance to do better next time when kids and cops are dying, and the crimes come home in a fitting gunpoint conclusion. 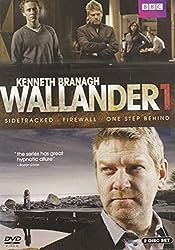 Well, Kenneth Branagh’s (Hamlet, Henry V, Othello, Much Ado About Nothing…) eponymous detective is certainly unkempt and crabby –and he’s only made more unstable by his caseload. This isn’t the robust or lighthearted we have known from Sir Ken but rather a five-o-clock shadow and defeated, ongoing weary. Kurt Wallander has a lot of pain and tears yet he remains lovable and relatable because he’s just trying to keep it together as the ghoulish deaths increase daily. He refuses to realize that it’s okay to be off duty and let your own life take priority. Wallander’s a signature away from divorce but still wears his wedding band, he doesn’t always get along with his daughter or father, and usually spends his free time silently zoning out in his chair. He pesters, nay, berates the bereaved, gets slapped a few times, admits to feeling old, and most likely resents the young spitfires about him. Why wake up when this job is your life? Though it consumes him, Kurt needs a creepy heavy case to solve – it keeps him from his own issues and seemingly preferred torment whilst covering up his mistakes and bang up interrogations. Wallander has tough, desperate choices to make. He won’t open himself up and can’t see anything positive after so much pathos. There’s no time to pussyfoot in the quest for so called justice, but Kurt’s gruff charm and endearing awkwardness with family and peers keep Wallander must see.

Balancing Wallander’s glum is a fine ensemble including Tom Hiddleston (Thor, The Avengers) as the young wannabe hot shot cop Magnus Martinsson. Although he actually spends most of his time as a complaining messenger boy or taking crap from Kurt, Magnus provides some sardonic humor amid the tedious paperwork and easy desk duties. He comes in handy at times but botches his supposed computer expertise and wastes time on useless or ultimately irrelevant tangents. Such elements would seem superfluous, but Magnus makes an interesting secondary father and son parallel for Wallander. He learns the hard way that the cases outside are very different from the safety of his desk. Perhaps the seeming importance or ready for more eagerness is part of the character, but the pre-Marvel Hiddleston also seems underutilized or limited by the role. As Magnus he is literally and figuratively ready and waiting to kick the door down, but bemusing quips and the subtly of his facial expressions accent Wallander well. I must however confess that I don’t care for the crazy curly blonde hair. He looks like a nineties kid playing at cops and robbers, but again, that fits the character, too. Tom Beard (Whitechapel) as Kalle Svedberg likewise provides detective exposition. However, he looks more like a cop and is capable of being at the crime scene reflecting the ebb and pull behind Wallander’s often extreme tactics. A dorky, stereotypical profiler, drunk, broken journalists, and cliché teen hackers also provide Wallander with the straightforward, plot advancing details on a case-by-case basis. Stateside, we perhaps expect longwinded spotlights and episodic focus on such trite cop show elements, but here the medical examiners get in and out of Dodge, no fuss.

Sarah Smart’s (At Home with the Braithwaites) Anne-Britt Hoglund is as close to a partner as Kurt has, but she also keeps it together despite being well aware how deep the investigative rabbit hole goes. Anne-Britt is sensitive and does the quiet things during a case –which may seem the little woman tender formula. However, she also laments how her work adversely affects her home and marriage, doing a lot with only a few scenes or dialogue and providing honestly and a grounding element to Wallander. Of course, Sadie Shimmin (Mr. Selfridge) as squad boss Lisa Holgersson doesn’t want to hear Kurt’s drama yet remains smooth and unflustered whilst also giving him a wide berth and reminding him that there are indeed rules to follow. Daughter Jeany Spark (Da Vinci’s Demons), unfortunately, doesn’t have it easy balancing life and single dad Wallander. In fact, all her troubles in life stem from him, but she remains a pleasing example of the positive Kurt could have at home if he just took a gosh darn moment to pay attention. Likewise, David Warner (Titanic) is simply excellent as Wallander’s aged, ill, and bittersweet artist father. In some ways, I do wish Wallander was a regular, hour long, six or eight episode series that gave more time to this lovely support and the coming and going guest players – say hey it’s Nicholas Hoult (X-Men: Days of Future Past) and shout out to Blake’s 7’s Steven Pacey! And I confess, I did fall for a few character red herrings!

Wallander has seascapes, outdoor filming, and sunshine, but the pretty scenery contrasts the bleak plot and gruesome crime scenes. It’s nice to see a relatively obscure to us Scandinavian location, too, keeping the dynamics fresh instead of the same old bad ass, New York, suave cops winning the day. The cinematic flair, boats, cars, and people on the move add to this rugged sense of chill and northern dreary. The design is non-static but not a busy, herky jerky in your face shock editing dulling the senses. The score adds a bit much to the harsh landscape – it’s heavy and intrusive at times – but this matches Wallander’s melancholy tone. The phones, err “mobiles” as they say, however, are already dated by a decade, along with big computers and now millennial retro fashion and makeup on the ladies. These cops can’t have a warrant instantly emailed to their smart phone, gasp! This is a police department with one crappy guy on a computer instead of an entire IT unit, no wonder our eponymous inspector is so darn frazzled.

I like British detective shows and watch my fair share of them, but Wallander may be for a niche audience here across the pond, filling the void for viewers seeking a well done, entertaining crime drama. Again, I have no Swedish frame of reference with the books or prior Scandinavian television productions, but this Wallander is A-okay stuff thanks to a gritty focus on character, performances, and the toll of the crime – not the action and gore. Viewers searching for an intelligent, sophisticated investigation need look no further than this Wallander debut.

Posted by Kristin Battestella at 12:19 AM