After a fine first season for Wallander, this second trio of British episodes from 2010 continues to adapt the Swedish Henning Mankell novels into gritty detective drama.

Year Two kicks off with “Faceless Killers” and the dual murder of a rural elderly couple, eerie heavy breathing, bleak isolation at the crime scene, dim lighting, and dim chances of survival. Why this couple? The age of the victim makes a senseless crime even more difficult to accept – not to mention the possibilities of prejudice or racism as motivation for the attack. The sad, symbolic white horse is a familiar trope, but it creates an extra layer of lonely, bittersweet, and free against the secrets, revelations, finances, and mistresses unraveled in this investigation. Translation troubles, press leaks, and phone threats interfere with the case and up the ante for Wallander. Whether it is a life taken by wrong means, natural causes, or erroneous retaliations, this is an intriguing look at ageism and new family dynamics – touchy, timely topics still relevant despite the five year date on these episodes. Wallander has a bit more action here as well, with some truck chases and shootouts, yet the one on one intimate and personal reflection remain as the 90 minutes mount. Does one project his own anxieties onto the investigation, jump the trigger, misinterpret the case, and influence secondary crimes? When mistakes are made as the violence escalates, who’s to blame, the cops or the criminals? Wallander provides no easy answers, but offers plenty of a self-doubt and drama.

Next, Wallander tackles spiritual elements and a sense of reflection in “The Man Who Smiled.” Opening prayers, rosaries, and crosses on the wall lead to personal loss for our titular copper after a friend asks him to investigate a seemingly simple car accident. Time moves quickly here, but consequences from the previous episode create a jaded mood – the electric is turned off, mail is piling up at home, and quiet, dark, pensive scenes let the brooding simmer. On the job trauma and the awkwardness in returning to the squad room bring change to the inter office dynamics as investigators argue amongst themselves. Things seemed to be a-okay without Wallander and his unstable inability to cope, imagine that! Wallander skips some of the unnecessary details or by the book steps –Kurt never says when he is officially back to work and there are probably technicalities about taking up arms again. The crimes may not be as severe this outing as well and big topics such as white savior African causes, corrupt foundations, and black market trade have varying heavy moments here. However, the hesitancy of wearing a side arm and the questioning of when a case isn’t personal add excellent humanity. What does the gun have to do with the mental solving of a case? Must police be totally on form and always at the ready? Is there still room for internal inspection and examination when a case doesn’t get to you or when the crime doesn’t touch your soul? Red tape and technicalities become pretty irrelevant when criminals are choosing who lives and dies and measuring the scale of right and wrong by the body count.

“The Fifth Woman” begins with a somewhat mundane murder, but Wallander excels at having such routine death, gruesome crows, abuses, and torture as the catalyst for an assessment of the living. More family heavy throws a loop as a seemingly simplistic case escalates towards more tragedy. When does the body of a person become a corpse? For some numbed by dealing with death daily, a dead body is always just a body – but what of those who grieve too much or never mourn at all? Some scenes here are so still they look almost like freeze frames portraits. The detectives tell the bereaved that they understand the difficulty of one’s loss, but they can’t quite accept their own cynical inability to cope. Rifts and familial relationships help Wallander in discovering oneself, but often the realizations come too late. The show’s taut design belies the falling apart nature of its eponymous detective and the seemingly random series of events – serial killers and international shenanigans galore yet Wallander is taking justice into his own hands. It’s okay to kill those who deserve to die, right? Honestly, I was shouting at the television during this finale!

Now that he’s diabetic and has had a vacation between Series 1 and 2, Wallander is a little more sensitive with witnesses – but not by much! Kurt had a pleasant family trip last hurrah, but dealing with his father’s illness is anything but healing for him. He’s still wearing his wedding ring yet allows the racial aspects of a case to influence his personal views about his daughter’s new relationship. However, when Wallander says he’s interested in the truth, not what’s the proper or politically correct thing to do, we believe him. Of course, that doesn’t mean he can handle his family, do what is medically necessary, or accept help during an investigation much less give up on a case if he is personally targeted or in over his head.  At times, the viewer has to wonder how Wallander is still a detective! Aged friends and acquaintances in worse circumstances remember him in younger and happier times, and everyone except him knows he can’t sustain this burning it at both ends lifestyle. Kurt doesn’t notice how death shadows him unless he’s on a case – to him a piece is missing if there is no crusade. Whether he has a badge or not, Wallander admits mistakes are made, but may absolution yet be found? Kenneth Branagh again exemplifies this frazzled state of mind with stuttering and a drunken, ill look. The physical tolls of the job are made visual as the tears and breakdowns mount. But hey, Kurt finally takes a shower this season! 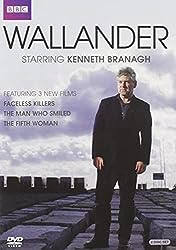 Well, well, Tom Hiddleston’s sophomore inspector Magnus Martinsson hasn’t grown up much since we last saw Wallander either. He jumps to an easy conclusion and blunders the case yet again in what feels like a character reset after some positive strides to end Season 1. Magnus is wearing more button down shirts and sport coats – he looks like a detective instead of tech support and gets himself together away from Kurt. However, if he hasn’t advanced in the squad room by now, he’ll probably always be the ho hum cop answering phones, doing paperwork, and playing secretary. Fortunately, Magnus again provides much needed moments of humor, rolling his eyes at Wallander’s personal crap and sentimental interference. He may complain at some of his menial investigative chores or grow frustrated when others succeed over him, but Magnus doesn’t let a case get to him, which is something Kurt should learn. Wallander does admit that he trusts Magnus, which ultimately says a lot – whether or not they make mistakes, the two are a lot alike and work well together. Hiddleston looks great thanks to the leftover bulk up from his Thor auditions with Branagh, but I swear, not only must he have kept some of Magnus’ clothes, but I also think he might still wear them. And my goodness that hair enters the room before he does! Richard McCabe (The Duchess) as Sven Nyberg likewise knows how to bounce with Wallander, providing important analysis or ballistics information. Though Nyberg is solid crime scene support for Wallander when we do see him, he unfortunately seems to be off screen and referred to more than he’s seen and sometimes feels like a composite wunderkind catch all – he handles medical examinations and forensics, too!

Sarah Smart as Anne-Britt Hoglund is also on form, unafraid to go searching for the information needed on Wallander. She’s strong in the office but sensitive to life beyond the case, and has even had the rest of the Ystad crew over for dinner. Anne-Britt continues to prove a balance between work and life is possible – she gets home on time and puts her kids to bed. Sadie Shimmin toes the line, too, reining in Wallander as boss Lisa Holgersson. She wants more people on the case and chews Kurt out for his behavior but often gives his tenacity the benefit of the doubt. These ladies look and act realistically – they are dressed in appropriate work attire and don’t wear badass tight leather or sassy badges on their hips. Again, Wallander is obviously not about the secondary cast, but it might have been nice to go home with the rest of the squad in comparison to Kurt’s topsy-turvy. His daughter Jeany Spark is grown up with a new man in her life. It’s not easy for Wallander to accept and his opinion is not the one she wants to hear. Guest star Vincent Regan (300, Troy) also creates an antagonistic yet bittersweet ex-cop equivalent for Wallander, but dad David Warner again delivers a wonderfully tender performance. He’s pitifully ill, clinging to his art and dignity while losing his sanity. It’s upsetting for a son to see the source so broken, but the realistic, difficult pleas and loss of faculties don’t stop him from seeing life more clearly than Kurt can.

The bleak palette, bitter landscapes, windy desolate, and an ominous nighttime carnival give Wallander some edge to match the crimes and pathos, and a crisp mood accented with animals and the outdoors creates a natural feeling amid these fine cinematic values. Older cars, dated phones, non-digital finger printing, and a general lack of technology or technology not being critical to the case is also very pleasing to see and leaves the resolution up to one man’s deduction instead of gadgetry. Granted, there are some unrealistic investigational aspects in Wallander – paperwork, legal process, and consequences for police shootings go unresolved unless it is convenient to the plot at hand. Some audiences may also be bothered by the anglicized update of the Scandinavian trimmings, but I like when we can still see the Swedish writing and sources onscreen. Besides, we’ve been doing The Three Musketeers in RP since the thirties, so British retention in the spirit of the original is nothing new. I’ve quibbled previously about Wallander not being a more traditionally shaped regular serial, but the telemovie format allows room and depth no longer found on American channels such as A&E, where reality programming has pushed aside award winning cinematic tellings like Hornblower. I also don’t understand why the British programming I want to see is also never found on BBC America, but that’s another essay!

Wallander’s cop work may seem typical, straightforward, or may be too simple for viewers expecting finite forensic analysis or twisting and turning police thrillers. However, great character analysis and performances continue to shine in this second series. In fact, the psychological depth here may even be too highbrow for some audiences used to more action-oriented fare. Fans of the cast or intelligent drama should raise the personal stakes and dig down deep for Round Two of Wallander ASAP.

Posted by Kristin Battestella at 12:10 AM