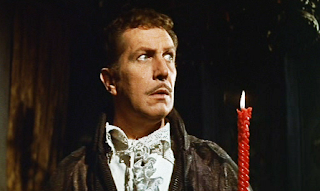 After conceding to a viewing of the original House on Haunted Hill a few Octobers ago, my husband agreed to watch two more horror classics starring the silver screen’s dark prince Vincent Price. Being a dutiful horror enthusiast, I presented House of Wax and The Pit and The Pendulum.

In the 1953 frightfest House of Wax, Price stars as obsessive sculptor and historian Henry Jarrod. His museum partner Matthew Burke (Roy Roberts, Gunsmoke, McHale’s Navy) presses Jarrod to abandon his educational approach and sculpt the shocking; but when Jarrod refuses, Burke burns down their museum for the insurance money. Thinking Jarrod dead, the now wealthy Burke woos Cathy Gray (Carolyn Jones)-unfortunately, Jarrod survived the fire. Deformed and maimed, Jarrod and his new sculpting team will do anything to make their macabre House of Wax museum a success-including a little help from the dead.

I’m not a fan of modern remakes, but several of the fifties spectacles are fine updates of earlier films-The Ten Commandments, anyone? Director Andre de Toth (Springfield Rifle, The Gunfighter) takes the mystery and suspense of 1933’s The Mystery of the Wax Museum and ups the anti for glorious Technicolor and 3-D hysteria. Of course, several nearly unnecessary scenes designed specifically for the 3-D fancy look a little silly now. Why are we watching a guy with a ping-pong paddle and can-can girls shaking their petticoats? Though these moments are stalling today, House of Wax’s carnival and Victorian atmosphere add to the fun and the horror- finely dressed and fainting debutants, the museum delights, scandals of murder, nudity, and mayhem! You can’t help but enjoy the mix of turn of the century with fifties production values. It’s very easy to get caught up in the ladies’ screams and decrepit waxworks.

Fine production is one thing, but Vincent Price (Laura, The Private Lives of Elizabeth and Essex, Edward Scissorhands- to name a few among his one hundred and fifty plus credits!) and his classic, campy horror style make House of Wax. I love old films, but I must admit fast pace modern viewers might pass on many a good classic show if they tune in for some bad acting and a silly story. Price, however, is special. We believe him as the moral artist unjustly wronged, yet delight in his masterful- if twisted- plan to serve his enemies their comeuppance. Price can be over the top sure, but he gives us a complete, slick talking, multidimensional Jarrod to root for.

Likewise, our Victorian scream queens match skill and beauty with Mr. Price. Famous for her role on The Addams Family, here Carolyn Jones is the complete opposite of her goth Morticia. Shrill, blonde, sassy, ridiculously corseted and lovely- Jones’ pivotal role proves she’s more than a one trick actress. Phyllis Kirk’s (The Thin Man) serious Sue Allen is also more than just the object of Jarrod’s wax obsessions. Jarrod may be charming, but Sue suspects what no one else is willing to imagine. She’s supposedly little more than a delicate Victorian flower, but the audience relates to Sue and wants her to unmask Jarrod and his schemes.

Unfortunately, as henchman go, House of Wax serves up little. Of note, of course is Charles Bronson (The Dirty Dozen, Death Wish) as the mute strongman Igor, but boyfriend Scott Andrews (Paul Picerni, To Hell and Back) and Lt. Brennan (Frank Lovejoy, Strategic Air Command) and his cops look like they just walked across the street from the set of Dragnet. They serve their parts as annoying policemen and solid good guys, but that’s not where the flavor of House of Wax is at. Thankfully, the creepy wax figures and brightly colored décor balance House of Wax’s high-end scares and fifties values far better. It wouldn’t be a classic if we didn’t have a wooden, fedora wearing copper, now would it?

Made in 1961, Roger Corman’s (House of Usher, Children of the Corn) big screen adaptation of Edgar Allan Poe’s The Pit and The Pendulum is similar in low budget production but different in mood and style. Twilight Zone writer Richard Matheson lengthens the freaky, gothic feeling of Poe’s short story, developing a psychological examination of torture and death-not exactly the carnival atmosphere of House of Wax, but exceptional in its own right. 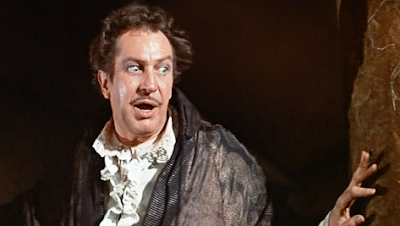 It’s the 1500s and Francis Barnard (John Kerr) travels to after the mysterious and sudden death of his sister Elizabeth (Barbara Steele). His distraught brother-in-law Nicholas Medina (Price) provides precious little and then suspicious information about ’s death. Nicholas’ sister Catherine (Luana Anders) and Doctor Leon (Anthony Carbone) are very protective. When ghostly scares keep the family up at night, Nicholas fears may have been buried alive. As Nicholas’ breakdown progresses, the torrid and torturous family history is revealed-creating deadly consequences for the current houseguests.

The Pit and The Pendulum may start slow for some, but the medieval setting, isolated castle, and remnants of the Spanish Inquisition set up a very moody and eerie picture. The castle sets are perfectly dressed with candelabras, cobwebs, dungeons, and lush velvet. It’s beautiful and scary at the same time. You’d visit here perhaps for the novelty, but you wouldn’t want to spend the night. Corman and Matheson smartly flesh out their cast and add naughty history in the spirit of Poe. The latter half of the picture may become a touch too comical, but the editing and pacing of the titular pendulum is masterfully done.

Once again, Vincent Price steals the show in The Pit and The Pendulum. We can understand Nicholas’ pain-a horrific childhood, a beautiful young wife lost. We feel bad and yet delight in the slow mental decay as Nicholas snaps over his family’s toys-the rack and the iron maiden among them. I suppose not all modern audiences can enjoy such an over the top performance, but Price proves he’s the master of horror camp here. He’s famous for his fanatical onscreen horror personas; and after spending the night with The Pit and the Pendulum, you believe Price is really a freaky, horrific kind of guy.

Keeping up the heart pumping psychological suspense are a fine John Kerr (South Pacific) and Luana Anders (Dementia 13). Kerr is perfect as the voice of reason amid these hesitant and secretive people, and Anders is charming as the damsel wanting to tell all, but too fearing and careful to take the plunge. Despite the neck rolls, Anthony Carbone (A Bucket of Blood) is also slick as the doctor with all the answers. Sometimes such manly men can look a little silly in good old puffy pantaloons, but each actor looks the part. 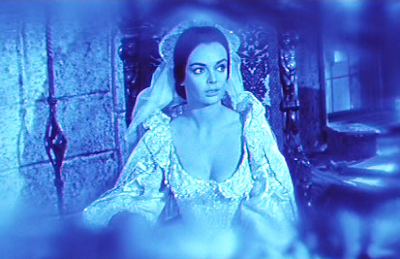 Anders’ gowns and costumes are lovely as well. You believe in ghostly ladies with all these flowing veils and rustling silks trailing along the spiral staircases. Her onscreen time is brief, and her few lines are dubbed, but Barbara Steele (Shivers) starts her scream queen status early in The Pit and the Pendulum. The costumes are dynamite, and her scares and twists are top notch. Her big finish here might be small and obvious today; but the naughty performances, enchanting costumes, and scary sets are well worth the titular action and twist ending in The Pit and the Pendulum.

Despite our high tech modern sensibilities, there are a few scares to be had in both House of Wax and The Pit and the Pendulum. I wouldn’t recommend super youngins take a viewing, but there’s actually precious little blood, gore, skin, and language to seriously offend. Price and his horror classics may be low budget and old to us, but there’s also something highbrow as well. It says a lot when we’re still talking about scary stories and crafty moviemaking fifty years later. House of Wax and The Pit and the Pendulum don’t need desensitizing sex, drugs, and rock and roll to keep us in their spectacular, twisted, and macabre worlds.

Fortunately, such delightful film is cheap to come by today. Both House of Wax and The Pit and the Pendulum are available on DVD in several editions and sets -usually including a double bill with other Vincent Price gems. Check your video store’s bargain bins, rental options, or online viewing for classic scandal and mayhem this Halloween.

Posted by Kristin Battestella at 12:40 AM

I've picked up a copy of The Pit and The Pendulum on DVD, so look for a few screen captures to appear here eventually!


You can also find this spooky review of ours at Horror Addicts!!