The Masque of The Red Death and The Premature Burial 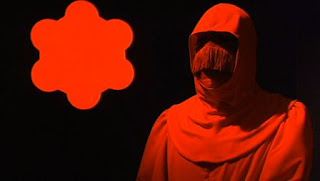 The Masque of The Red Death and The Premature Burial Make for a Spooky, Smart Double Feature

In my never-ending search for quality horror, I often turn to the classics. I was pleased to find that two of my favorites The Masque of Red Death and The Premature Burial were available on one DVD. Corman, Poe, Price- Horror Heaven!

Ruthless and satanic Prince Prospero (Price) takes crops from the local villages and burns those carrying the dreaded Red Death plague. He abducts the lovely, devout peasant girl Francesca (Jane Asher) and takes her back to his castle. Other nobles are also gathering at the castle under Prospero’s offer to wait out the Red Death with evenings of pleasure, masquerades, and debauchery. Part of his entertainment includes the diminutive Hop Toad (Skip Martin, Circus of Fear) and his little ballerina Esmeralda (Verina Greenlaw, The Six Wives of Henry VIII), but Prospero’s satanic mistress Juliana (Hazel Court) has no time for dances or Francesca-as she is preparing to become a bride of Satan. These demonic delights are all going to Prospero’s plans-until the Red Death incarnate crashes his decadent party. 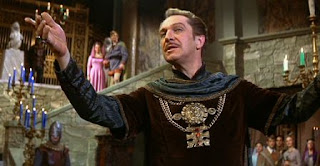 As you can tell, I’ve seen my share of spooky flicks and Price pictures. Perhaps not as well known today, The Masque of The Red Death is my favorite of the Poe series from director Roger Corman. This 1964 treat has all the big budget looks one could ask for. It’s gothic, dark, demonic-yet the candle light, colors, and castle sets are a real treat. The costumes look perfectly medieval-the men as well as the ladies. I could say The Masque of The Red Death is a costumed, epic spectacle if not for the macabre subject matter.

Charles Beaumont (The Twilight Zone) and R. Wright Campbell (Man of a Thousand Faces) skillfully weave Poe’s tale of disease, death, and comeuppance with a touch from his lesser know ‘Hop-Frog’ tale and create a charming and yet dreadfully spooky movie. Poe is well known for his obsessions with death and burial, but the core of The Masque of The Red Death is unique. These prideful and gluttonous subjects fear death, sure-but that doesn’t stop their cruel and deceitful, devilish ways. Religion is only touched upon briefly, but the iconic notion of Death itself entering among the naughty and taking its tally strikes the audience on multiple levels. Do we really see Death when we are so close to it? Do we all walk such a finite yet intimate line with disease and punishment? Visually desensitizing, slash and sex and gore, modern horror can’t compare with Corman’s visual interpretations of Poe. 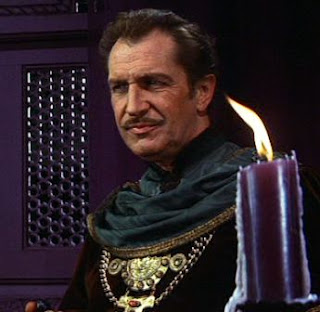 I know Vincent Price has a reputation for being over the top-as in The Pit and the Pendulum for example; but he’s relatively suave and subdued here. We’ve seen him in many periods and styles, but the outlandish hats, plumes, and color still look good on Price. He doesn’t seem out of place amid demonic castles and masked parties. We believe his Prospero is kinky, vicious, and deadly-but we’re awed when Death comes along and steals the show. Perhaps Price has more famous roles; but for my money, he is his best here. Likewise, Vincent’s vixens look devilishly good. Horror queen (The Curse of Frankenstein) shows her bosom and her satanic ways with a bizarre mix of charm and grace. We shouldn’t like the dark lady doing nasty rituals and marrying the devil, but Court’s beauty and ethereal style are delightful. Not to be outdone, angelic ex-Paul McCartney flame Jane Asher (Alfie, Crossroads) rivals Court with her white gowns and youthful devotion. We want her to keep her innocent naiveté, but we also don’t expect her righteousness to win out. 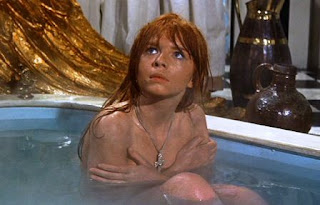 The Masque of The Red Death is a rarity in horror pictures because it achieves serious social commentary about the corrupt aristocracy, death, and how the evil get their due- all this along with plenty of scares and onscreen mayhem. Some might be offend by the devilish imagery, but horror fans and classic enthusiasts need to love this macabre, yet idealistic picture. Of course, 1962’s The Premature Burial is by no means merely the back end of a double bill. Technicalities at American International Pictures unfortunately leave us without our regular Poe man Vincent Price, and I think The Premature Burial is a little unloved because of this. However, Charles Beaumont and Ray Russell (The Man with the X-Ray Eyes) again craft an intellectual analysis from Poe’s tale of death and fear. 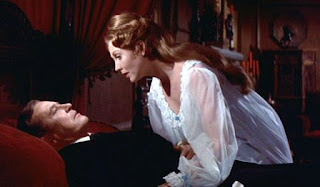 Guy Carrell (Ray Milland) fears his family history of catalepsy and builds a complex and technological tomb to prevent himself from being buried alive. His wife Emily () and sister Kate (Heather Angel, Suspicion) disagree in how to support Guy’s fears, yet stop his building obsessions. Guy turns away from his involved tomb so Emily won’t leave him, but death and family history soon catch up to him. 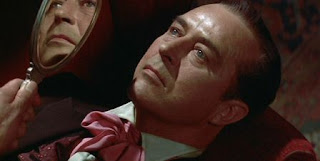 More than a fine, if surprising, substitute, Oscar winner Ray Milland (The Lost Weekend, , It Happens Every Spring) is delightful as the intelligent Victorian gentleman who becomes obsessed with being buried alive. His extreme, exhaustive precautions are understandable, logical, and well thought out; but somehow, we still know this is all askew, maniacal, and preposterous. Milland is quieter than Price, never quite boiling over as we expect him to. In away, his buttoned performance is bound, trapped inside the coffin Guy so desperately fears.

Once again, is lovely and charming as Guy’s ambiguous wife Emily. We believe she cares for Guy’s state of mind-and yet she’s too lovely and youthful to put up with his deadly ideas, isn’t she? The Premature Burial gives us more exceptional dresses-but this time we are bespectacled with hefty hoop skirts and Victorian delicacies. Though somehow desaturated and less colorful then Masque (I initially was a twit and thought it was black and white!), Corman gives us a fine production of mood and atmosphere. We don’t often see such proper costumes in a low-end horror picture, but all the creepy graveyards, fog, smoke, and mirrors make their presence known, too. 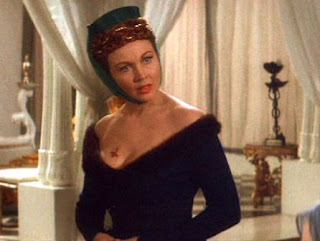 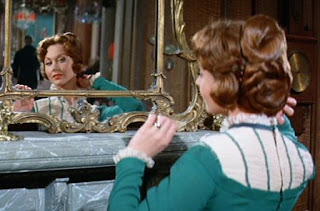 The Premature Burial is again a picture that might not be fore everyone. It’s slow, deliberate examination of death might be frustrating and too close to home for some. Even though we’re beyond the days of rampant plagues erroneously burying people alive and Victorian occultists trying to cheat death, this is still an understandable, real fear not so far removed from society’s psyche. Both The Masque of the Red Death and The Premature Burial serve up a fine cast, intelligent scripting, period piece atmospheres, and plenty of spooks. These flicks have plenty of old time scares, but nothing majorly offensive- unlike today’s sex and slash flicks. 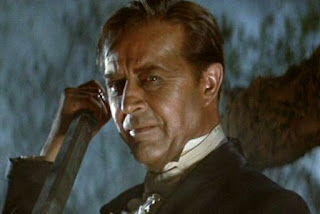 The dual DVD of The Masque of the Red Death and The Premature Burial is affordable enough, but again a little old and a pain to flip. Thankfully, we’re treated to a few nice conversations with Roger Corman chatting about this pair of Poe pictures. Horror enthusiasts and classic film fans should adore these two complex, scary tales each and every October.

Posted by Kristin Battestella at 2:06 AM

I exclaimed in public when I found the dual DVD of The Masque of the Red Death and The Premature Burial used for $7!

As you can see, I've added some caps from Masque, and I hope to get to Burial as well. I have a lot of pictures to look at some of the great costumes thus far, so I might add these two to my list of Screen capture albums on photobucket.

Okay, my new DVD of The Premature Burial is not black and white! So either it never was and I'm a space cadet or I've got a nice magical colorized version here. Hopefully I'll get some captures up soon!