By Kristin Battestella
Well since my first review of 300 when it was fresh in the theaters garnered 11,000 hits at Fire Fox News, I thought it fitting to get my feelings on the DVD release down. Commercials are running everywhere for 300’s DVD release. Deluxe edition at Target. Trading cards at Best Buy! HD DVD and Bluray releases! After some research, I decided I wanted the feature laden Special Edition release. Casual fans are better off with the simple widescreen or (I cringe) full screen release. But comic enthusiasts and film collectors, I implore you to swing for the 300 Two Disc Special Edition Release.

In the theatre the action, effects, and score dominated the 300 experience. On my home viewing, however, I found 300 to be a much more somber and emotional piece. It’s still poetic yet violent visually, but the sacrifices and bravery of the Spartans is easier to appreciate without fan boys cheering. The humorous moments are still there, but there’s no theater laugh track. I can’t recall the last time a film had such ground breaking cinema stance and came along with a touching story. Now that my dad’s seen 300 he agrees. You can take 300 for all its cinematic glory and its of course entertaining, but the Battle of Thermopylae is also an incredible story that hasn’t gotten old in oh, two thousand plus years.
Along with Disc 1’s widescreen presentation of 300, a wonderful commentary can be selected. Zack Snyder and his creative team are inspiring the future filmmakers of America with this insightful analysis. I don’t normally pay attention to a DVD’s menus, but 300 just look really cool, and most have that great edgy music playing with them. Stand outs abound in the Special Edition’s second disc of features. The Fact or Fiction segment with Frank Miller and Zack Snyder is a short twenty five minutes, but this feature provides the pros and cons of history and the liberties taken for the film. Unlike The History Channel’s worthy but long winded and over re-enacted 300 special, here the feeling is kept light and fans more interested in the technical how tos will get a dose of history. A short follow up The Warriors of 300 gives further insights about Spartan life from the actors.
As an author myself I found the Frank Miller Tapes segment fascinating. He’s portrayed as a

brilliant, loveable cookey fellow. I admit I was unfamiliar with Miller’s work before 300, but longtime fans will definitely eat this feature up. Miller and his comic book elders remind me of the nineties revival of comics and graphic novels, and their case for this return to a new kind of storytelling is quite the inspiration. The best part? All of it is subtitled for complete understanding.

There’s even more features that I haven’t even fully absorbed, including 12 webisodes with a play all option, behind the scenes and photo galleries. Unfortunately, my pre purchase motivation for this Special Edition was the deleted scenes, and they have come up short. Although they are introduced by Zack Snyder, these three deleted scenes are short and again provide the notion that deleted scenes are deleted for a reason. Maybe I’ve been spoiled on The Lord of the Rings Appendices, but no music features or outtakes appear, nor does it look like there are additional hidden eggs. And also, the previews and HD And Bluray commercials are a pain to jump over. 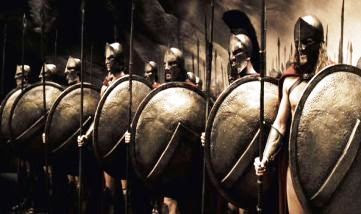 Indeed my only fear is that there’s more excitement to be had, and some other super duper ultimate expensive 300 DVD will appear. For now, however the Two Disc Special Edition of 300 is tough to beat.

If you must own 300 on DVD, pick up the Special Edition at your favorite retailer today.
Posted by Kristin Battestella at 4:27 PM