Children of The World

Aren’t we all just Children of The World?
by Kristin Battestella

Not that I’m one to disagree with the Brothers Gibb ;0) Children of The World is their smash 1976 release. The boys step up their success for Main Course with this album, what fans in the know consider to be their true ‘disco’ album.

Again, disco isn’t my favorite style, but sometimes you are just in the mood to dance. Naturally, COTW’s lead off track You Should Be Dancing fits the bill. Not one to listen to over and over in my opinion, but sometimes this song will come on the radio and you can almost forget that Travolta dance routine. Almost.

You Stepped Into My Life is the second track. Despite all this dance hype, Barry, Robin, and Maurice still manage to make their songs lyrically relevant. You Stepped Into My Life has some great words to it, if you can understand the falsetto! Love So Right continues this textbook Gibb ballad sound. The lyrics and arrangement are perfect. Even falsetto naysayers have to like this one. A Bee Gee staple.

Lovers is one of the songs on COTW I can play over and over and not get tired of it. Barry and Robin combine several of their singing styles and it’s a real treat to listen to. Can’t Keep A Good Man Down is another Bee Gee song with an air of mischievousness about it. Robin sings what I swear is only his second fast lead prior to 1980. The music can annoy me sometimes, but the chorus in this song can really get you smiling and giggly. 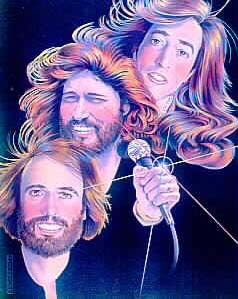 Boogie Child was the flip side of Lovers, but I think it could have gone either way. Again you need to listen with mood. Boogie is a tad on the raunchy side and makes me think of the Pussycat dolls! Love Me, however, is a great song to cry to. My mother hates when I’m in a rut and listen to it over and over. Children of the World seems to be well balanced between ballads and power dance tracks. Take your pick.

Subway is similar is style to Lovers, and I don’t quite see what so special about going to the subway but hey! I always say to each his own when interpreting lyrics! The Way It Was returns to tear jerker mode, and will choke you up if your not careful. The title track Children of The World is the last on the album. Again one of the songs I could take or leave. It seems to want to combine both the ballad style and dance rhythms. Although it has some great lyrics, it’s not a daily listen for me. But one should never let the disco stigma stop you from listening.

Children of the World is a great example of some serious and meaningful songs disguised as dance tracks. It’s very versatile. Listen alone with your headphones or play it in the background at your next party. I guarantee people will dance and ask you who it is! 80)
Posted by Kristin Battestella at 2:58 PM