Alright we all know about it. The only movie based on a board game. If you haven’t seen Clue, you’ve most certainly played the Parker Brothers game. Phrases like ‘It was Colonel Mustard in the billiard room with the candlestick’ are part of our cultural lexicon, so why does the John Landis penned film get such a bad rap? Clue is a fun movie with spooks and humor for the whole family. 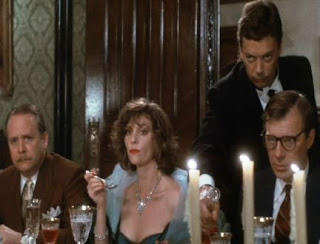 Set in the 1950s, writer John Landis (Animal House, An American Werewolf in ) and director Jonathan Lynn (My Cousin Vinny) ensure Clue mixes old school film noir styles with 1985 slapstick supreme. Today’s younger audience might not be familiar with Madeline Kahn or Martin Mull, but Mrs. White, Colonel Mustard, and Michael McKean’s Mr. Green all have their moments. Each actor knows his or her handle, and along with outrageous set ups and situations, each character has some sort of trademark or catch phrase. The resulting chemistry and deadpans highlights this ensemble. The cook, the singing telegram, the driver, etc.-are, however, stock, clichéd characters. Fortunately, they serve their purpose and don’t stick around for too long.

Horror comedy. Comedy horror. These may seem like oxymorons, but in the mid eighties, studios churned out such films for better (The ‘burbs) or worse (Once Bitten). Clue has its share of essential laugh out loud moments, as well as smart dialogue and word play, but also made way for a few genuine jump in your seat moments. Of course, you feel silly afterwards, but the old fashioned creepy atmosphere is established early and grows for an hour and a half. The Clue set goes above and beyond bringing a board game to life. The attire of each character, the over top mansion, the French maid-even Clue’s score helps the audience along. Lightning crashes mixed with eighties twangs or good old doo wop on the phonograph provide something for everyone, young or old. 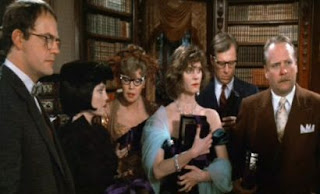 Perhaps the best part of Clue’s charm is its multiple endings. In theaters, random endings were shown. Just like the game can have various outcomes, so can the movie. This format was hit and miss with audiences, and for television airings, a special multiple ending completes Clue. The standard DVD release has next to no features, but it does provide for the option of a random ending or the multiple conclusion. Unfortunately, the subtitles are the kind that don’t exactly match the dialogue word for word. This irritates me, but quoters can take those or leave them. Some of Clue’s line’s are made by their delivery, anyway. “One. Plus two. Plus one.”

Old school fans will enjoy Clue whether watching for the first time or rekindling old memories. Kids will find enough laughs and spooks even if they don’t get all the subtext and innuendo. There’s a few risqué puns and sexual references, but Clue’s PG rating makes it a great choice for a family night at Halloween or any time of the year.

Posted by Kristin Battestella at 1:27 AM