My analysis of Cucumber Castle!
by Kristin Battestella

My one complaint about Cucumber Castle is its length. At only 36 minutes, it seems cut short, despite having 12 songs. Of the 12 songs presented, they definately prove Barry and Maurice could hold their own without Robin. Cucumber Castle is of course the only album done by only two brothers. After a rift during the making of Odessa, Robin went solo. Barry and Maurice here make a worthy contribution to the Bee Gee catalogue. 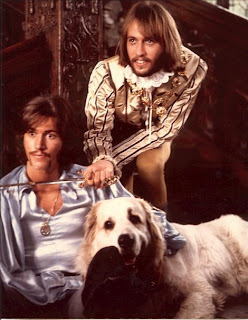 Cucumber Castle takes the road less traveled. It is mainly a country style broken hearted sound, with a few stand outs. I like If I Only Had My Mind On Something Else. Of course, I like them all. I think Barry’s voice is very strong on this album, and this track in particular. He’s got a lot to prove without Robin backing him or to hand off to. The lyrics are well done in this opening track. Sometimes in the later songs the writing seems a bit thin lyrically. I.O.I.O is such a fun jubliant song in its beat and reggae feel, that its easy to forget the lyrics about the girl leaving. Maurice’s background contribution defines the song. The arrangement of only the two voices is very well done. Although not a traditional song, indeed a Bee Gees classic! My only complaint is its too short.

Then You Left Me is yet another strong vocal outing by Barry. The lyrics are sound and as in If Only I Had My Mind On Something Else its a solid sounding broken heart Bee Gees song. Perhaps the one downside to this album is that many of the songs sound the same, with a few exceptions. The Lord is an adorable country gospel song one would never expect from The Bee Gees. Even though one might argue without Robin this technically isn’t the Bee Gees, Cucumber Castle proves to any one stuck on the disco stigma that there is more to the group’s repitoir. The Lord has a great melody and a catchy hook that will get stuck in your head, just like I.O.I.O . Still one must wonder if Barry and Maurice did The Lord simply because Robin did Lord Bless All or vice versa.

I Was The Child is the first very slow song on the album. Barry is strong but again it feels like you just heard this song two songs ago. When the song picks up it greatly improves. Indeed on this album you can’t simply listen to the first few bars of each song. Each song must be heard completely, and without a “Missing Robin” mentality. Otherwise every song takes on a greater melancholy feel. I Lay Down And Die is a step above the previous song and perhaps the best of the album’s broken heart type songs. The music is particularly strong here, and Barry’s delivery of the title lyric is in perfect form.
Sweetheart was made famous by Engert somebody Hickdink , another one of those songs that people have to stop and say, “Wait? This is The Bee Gees?!” Again a love lost type song, but the tone is upbeat and easy to get stuck in your head. The vocals are particularly strong, again due to Maurice. As with The Lord, Bury Me Down By The River is again not your typical Bee Gees song. This is a very country gospel style album defined by this song, in my opinion. It seems very personal, and Barry is at top form. The simple arrangement is very well done and has a very southern gospel church feel. One might wonder about the lyrics, but to each his own when interpreting lyrics.

My Thing is a worthy song if only to hear Maurice sing lead. I’m not quite sure what this song is about. The lyrics are, well, short on words, but again its all in one’s interpretation. But be careful, you will get this one stuck in your head, whether you love it or hate it.
The Chance Of Love returns to the Barry love song. Again his vocals this album are the best of his soul style voice, in my opinion. All Barry lovers must have this album. Turning Tide is more Barry. About now is where the songs start to sound the same. All the music is easy on the ears, and the lyrics similiar. This album is great for “background noise.”

Once the brothers came back together, Don’t Forget To Remember was the song always added on compilations as representive of this album. (Usually along with Saved By The Bell, from Robin’s Reign.) It’s lyrics are top, as are the voices and arrangements, and the style is true to this broken hearted country sound, but I don’t think its the best song on the album. In the Bee Gee songlist, Don’t Forget to Rembember is just another easy listening sappy love song, and not exactly the best to represent the album. Still, its on par with If I Only Had My Mind on Something Else and thus Cucumber Castle starts and finishes on a strong note.

Those who enjoy Robin’s vilbrato voice will not enjoy this album naturally. It is also tough to listen to each song and not wonder what Robin’s parts would or should have been, and vice versa with Robin’s Reign. As good as they are separately, the brothers are the best together. Cucumber Castle is a treat for Barry fans and worth a listen to anyone who doubts the Bee Gees can do country.

Posted by Kristin Battestella at 12:24 AM