Dinotopia Fun For All

When the four hour Dinotopia miniseries premiered on ABC over three nights in May 2002. I (like any other self-respecting adult) tuned in, but flicked. Kid stuff! Juvenile fluff, right? Based on the popular children's book series by James Gurney, Dinotopia goes beyond its initial treat of Emmy-winning dinosaurs, creature creations, and special effects. 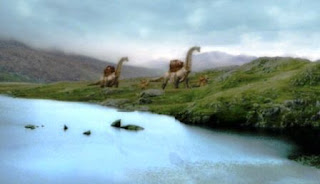 The story begins when two brothers crash their plane on the lost , a unique place where dinosaurs and people coexist. Karl (Tyron Letso) has no interest in going to dinosaur schools and allies with Cyrus Crabb (David Thewlis). Together they plot to leave the supposedly unleavable island. Contrary to his brother, David (Wentworth Miller) excels in learning the dinosaur footprint language and wants to stay in Dinotopia, initially because of his crush on the mayor's daughter Marion (Katie Carr). When the source of Dinotopia’s power- the beautiful and mysterious sunstones-begin to fail, David and Karl must help Marion save the island. 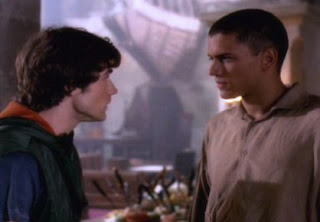 Top billed David Thewlis is devilishly marvelous as the suspicious Cyrus, but of course, many oglers now know it boy Wentworth Miller from TV’s Prison Break. His performance here is one of the highlights. All the actors are wooden and hokey in Dinotopia ‘s opening hour, but timid David learns to face his fears by attending Skybax training. If riding on a pterodactyl doesn't fix your problems, I don't know what will! The Dinotopia books take place in the 19th century, but the modern update sticks to the serious storytelling. When David is rejected by the Skybax Core he bonds with an outcast albino pterodactyl named Freefall. Together, they helped save Dinotopia from its own destruction. This example of strength is an essential lesson for children of all ages and is one of the things that makes the series special. Although he helmed the ‘gems’ Demolition Man and Excess Baggage, Director Marco Brambilla here strikes the perfect balance between effects for the kiddies and serious emotional scenes for grown-ups.

Although I bought the DVD for purely superficial reasons-ogling Wentworth Miller-my nieces got a hold of the set and watched it continuously for two weeks. They love Zippo. The computer-generated dinosaur professor has some of the show's best lines and humorous stunts. Unlike Jar Jar Binks, he does not offend and is refreshing for kids and adults. Lee Evans is absolutely delightful in his voice performance as Zippo, and the digital team excels in the small details. Little things like hand gestures and facial expressions complete Zippo and make him a real, believable character. 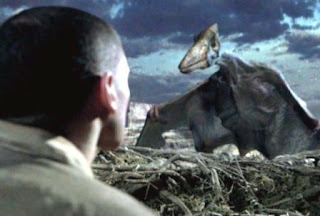 On my initial viewing, I was hoping for something sinister at play in Dinotopia. The sunstones-were they really sources of scaly brainwashing as Karl thought? Alas, no, but the idea of a utopia gone bad is presented by the end of the epic. Despite it's gear towards kids, and maybe due to its sound source material, Dinotopia presents several allegorical issues that are perfect for adults forced to watch Dinotopia for hours on end. Instead of searching for new sunstones, Mayor Waldo (Jim Carter) holds fast to Dinotopia’s traditions and refuses to explore the mysterious World Beneath. When David and Karl defy the Mayor they are put on trial, despite support from the Mayor’s own wife, earthy Dinotopia Matriach Rosemary. (Alice Krige is perfect as Rosemary and has fun in every one of her scenes.) If Dinotopia -perfect island of blissful humans and intelligent dinosaurs-can’t control their resources and suffered towards their own destruction, how can imperfect little old us survive our current troubles?

Make no mistake, however. Like the mythical Dinotopia itself, the miniseries is imperfect. Since it was made for television, the DVD presentation only comes in full-screen. The behind-the-scenes features on the two disc set are fine for film making fans, and the games included are great for the youngins, but still I would have preferred to see Dinotopia in all its widescreen glory. I’m also disappointed that the feature comes sans subtitles as well. Observant fans will also find a few key mistakes, including the poor control of 's little sister. Dialogue and scenes refer to little Samantha, then the script contradicts itself and she disappears from the second half of the film. Nitpickers might also catch the tricks used to bring Karl's pet dinosaur 26 to life. 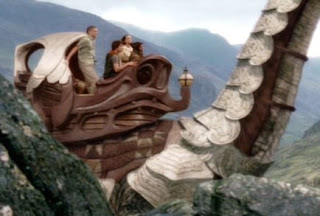 We can’t forget all of our dinosaur clichés, of course. T. Rex makes his obligatory appearance early on, but it works both ways. Some audiences may feel been there, done that, but young viewers will stay tuned in for more scary dinosaur battles. The killer pterodactyl battle at the end is worth the wait. I do have to wonder though, if Dinotopia rose independent of our society, how can they have the same names for their dinosaurs?

Hallmark Entertainment milked Dinotopia’s awards and rating success for all it was worth. ABC attempted a weekly Dinotopia series with an all-new cast, but the hokey scripts and strapped effects strayed too far from Gurney's vision too quickly. An animated feature, The Curse of the Ruby Sunstone fared better for the kiddies. Dinotopia is entertaining for children and adults alike. It's tough today for parents to find a film the whole family can enjoy, but Dinotopia fits the bill. Its morals and allegories aren't too preachy, and the characters are realistic and likable. They tackle extraordinary situations and overcome outlandish obstacles, but deep down kids understand these situations. Dinotopia helps children overcome their seemingly big problems and create humble solutions.

My nieces have even begun reading the Dinotopia books. If Dinotopia was made to inspire children to visit fantastical new worlds, grown in imagination, and promote self-image, then it succeeds 100%.

Posted by Kristin Battestella at 1:04 AM