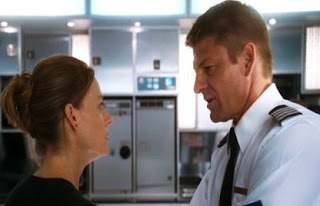 Flightplan: The In flight Thriller for Families
By Kristin Battestella

I didn’t expect to see the airplane thriller genre to revive anytime soon after 9/11, but the claustrophobic, understandably turbulent action offshoot made famous by the likes of Executive Decision and Air Force One never actually went away. Unfortunately real life events are still forcing a fictional tone down, but the 2002 Jodi Foster thriller Flightplan embraces the new less on action, more on brains turnabout.

Flightplan begins with former Engineer Kyle Pratt (Jodi Foster) preparing for a flight from to . Pratt and her six year old daughter (Marlene Lawston) are transporting her husband’s coffin home, and understandably so, both mother and daughter are upset and confused. Kid is very fearful of the outdoors and the jumbo plan designed by Pratt. The packed double decker plane provides little comfort to the family, and when Mrs. Pratt wakes up from a restless sleep, she discovers her situation has gotten worse. Every mother’s fear-kid has disappeared. When evidence implies that kid was never even on board the plane, both the crew and passengers suspect Pratt of foul play. 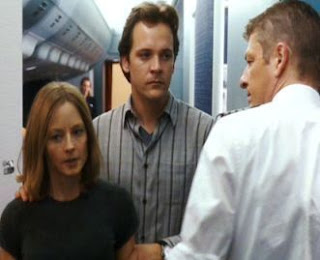 While researching for this review, I was surprised to find Jodi Foster’s role was intended for Sean Penn. The change is nominal-the masculine first name of Kyle is only mentioned once in the film, and although it would have been intriguing to see a father dealing with the loss of a six year old, the vigilante father theme has been done before. I wouldn’t think the role out of Penn’s range, especially now, as an older subdued actor. For Foster however, the role comes almost too easy. Make no mistake, her performance was spot on, and no doubt about it, this is Jodi’s film. Her facial realizations, actions, and movements are just right, yet it seems we’ve seen Foster in this kind of role before with previous hits Little Man Tate and Panic Room. Yet still, she adds her own spin on this near hysterical, yet highly intelligent mother. Panic Room was more action and stunts and about strong women taking control. Here, you would have somehow expected a man to be a propulsion engineer-except Foster plays Pratt as sympathetic, yet always with her wits about her. Not an easy line to walk, and its probably Foster’s Oscar winning talent that makes it seem so effortless and nonchalant.

I was impressed with the mostly unknown cast that holds its own with Foster. We see just enough of daughter Julia for the seeds of a realistic relationship, and hey, it’s a cute kid. Who wants to have her kidnapped, really? I’ve not seen Peter Sarsgaard before, but his portrayal of the ambiguous marshal Mike is equally subdued versus Foster. Likewise, Erika Christensen becomes fishy as the lone flight attendant who may be trying to help Foster, as does contentious stewardess Stephanie (Kate Beahan). The dialogue between all is tight and real, including the swift references to Foster simply as ‘Mrs. Pratt’. They are all just trying to be so polite!

Kudos to director Robert Schwentke and writers Peter Dowling and Billy Ray for keeping the film multi cultural and languaged. On-plane video and the jet’s crew are often heard repeating everything that’s said in English, German, and French. Making a film like this with an American protagonist and a solely American crew is simply not realistic. 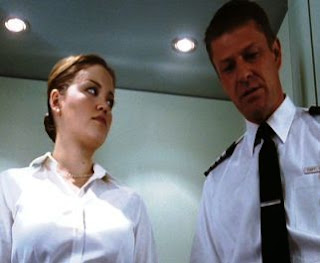 Fortunately, the most obvious antagonist in Flightplan is Sean Bean as Captain Rich. His attempts at sympathy toward Pratt try his patience-and he seems quite the jerk. His flat out questioning of Pratt’s drinking or medication and labored indulgence of her absurd requests allude to a Twilight Zone feeling. Is there no one on Pratt’s side? Why does she have such blind faith in the Captain’s control of the plane? Thinking of his crew and passengers first makes Bean-who is very well known to American audiences for his villainous turns in Patriot Games, Goldeneye, and Don’t Say A Word- look like the bad guy. His uppity British tone had a tinge of villainy, but of course, early on you learn that nothing in Flightplan is what it seems.

Flightplan excels in delighting the mind over the action. We’ve seen films like Turbulence that pride themselves on how much they can make their prop plane shake, but Pratt’s knowledge of aeronautics and aviation provide smart set ups and believable in-flight action. The references to the 9/11 attacks are also well played. You can’t not mention it or how its change airline procedures. How the crew and passengers react to these restrictions in the unusual situation of having a child onboard go missing is more suspenseful and mind thrilling than losing cabin pressure.

The believability of a child missing on a plane-How many places could there be? It’s not like she could leave!- is helped by the ultra slick set of the plane. Lush bars and crew areas, double decker passenger lounges, spacious cockpit. The posh look of the common plane areas is state of the art, and the underbelly sequences are dark, cramped, full of mechanics-very realistic. If you don’t know what the innards of a plane look like, you can imagine with Flightplan.

The behind the scenes features on the widescreen DVD are standard enough-and by the way, do get widescreen even if you are still clinging to full screen viewings. The scope of the plane and flying cannot be fully realized with a cropped picture. Schwentke and his team shed light on the featurettes, along with cast interviews, screen tests, and the usually movie magic reveals. What amazes me most about Flightplan is while it does have some potentially scary scenes and the obligatory plane explosions, the film is quite family friendly.

Younger children may be frightened by the kidnapping set up or death talk-especially children that might have recollections of September 11th, but thinking kids 10 and up might enjoy a night in with Flightplan. Enough action, realistic folks to root for, and very little blood or language. Parents beware, however, over a few scenes involving the stereotyping of Arab passengers. I don’t suspect that is something even the smartest kid could really understand.

The conclusion of Flightplan, unfortunately, leaves a bit to desire. After showcasing Foster’s intelligence, the ending relies on one the the bad’s cohorts to confess everything. It’s also a bit foolish to have Pratt ultimately destroy the evidence that could clear her without the cohort’s capture. Still, all parties carry their performances through to the end. Not only carry, but step up as the story unfolds to its inevitable- if potential let down- ending.

But hey, it’s tough for parents to find a film the whole family can watch. Even if you think your children are too young to understand the finer points of Flightplan, it’s not the kind of film you have to keep looking your shoulder for while you watch. Let the kids cheer for something-and perhaps get a lesson and some food for thought with the entertainment.

Posted by Kristin Battestella at 10:43 PM