Let’s Get Horizontal!
by Kristin Battestella

Horizontal is the Bee Gee second English released album. It also has the coolest looking cover in my opinion. In this 1968 release the brothers are breaking away from their prior Beatle-esque sound and going for a more psychedelic British Invasion pop. The album begins strongly with World. It’s somewhat depressing lyrics are repeated and crescendo as the song closes. World is a great opener, combining the old with this new touch of psychedelic.

And The Sun Will Shine, however, is the complete opposite of World. Today, nearly 40 years after its release, this is still one of the most often quoted songs by the Robin faithful. My niece is almost seven and she loves this song! It’s ironic, since most of the lyrics make no sense, as many of the early Robin songs don’t. His quavering delivery is impeccable. The one line that makes any sense, 'Love to me is life, and I live you’, may be the definitive if one had to summarize the late sixties Robin. (Fans of this version should also hear the live rendition on One Night Only. Perhaps tops the original!)

Lemons Never Forget is the album’s first true psychedelic outing. I got into some trouble in my household for going around singing the opening lyric, ‘Incidently there should be some changes made.’ Barry is very strong here. His voice is somehow harder or more edgy then the soft Beatle-esque sound or the breathy sound that would follow. Combined with the heavy music, the style is surprising and effective.

Really and Sincerely is the second sorrowful Robin outing. Those who do not like his early sound (My mother!) may not like this album. However in my opinion, one can never get bored with this album do to the constant vocal rotation between the brothers. The placement of the track list is well done. Really and Sincerely’s one fault is that its two songs after And The Sun Will Shine. It has a very ‘old world’ and operatic feel. Very beautiful to fall asleep to!

Birdie Told Me sounds more like the songs on First. It’s got a sweet and simple sixties melody combined with a very easy listening Barry. The harmonies are also top notch. Some say its too simple, and it is a bit short, but when listening you can follow the story from the breakup to the moving on. A surprisingly happy sounding song, given its subject matter. With The Sun In My Eyes is the return to mellow. Again a very beautiful song, except we’ve already heard two similar songs. It’s almost as if Horizontal is two different albums, one mellow, one psychedelic. Some may like that, others may not. You listen and decide! 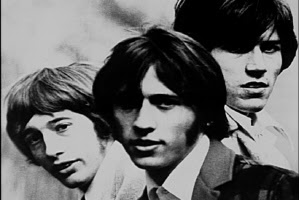 Next are the two more upbeat songs on Horizontal. Massachusetts is such a great song, The Bee Gees first Number One. It’s a great against type song, talking about staying home instead of going to San Francisco. You can’t help but get into this song. This is my father’s favorite. When my sister saw One Night Only for the first time, she was surprised at 'the other two brothers’ singing. My Dad exclaimed, 'You mean you’ve never heard Massachusetts?!’
Fast in pace is the next song, Harry Braff. This to me is the ‘fun’ song on this album. At first listen I thought they were saying ‘Chicken’ instead of ‘Checkered’. It’s up and down beat will either tap your foot or drive you insane. It almost sounds like the racing cars the song describes. Very 60s and very British.

Daytime Girl is the Maurice outing of the album. His voice is soft and has just the right amount of spacey edge for the lyrics. I’m not sure exactly what he is talking about, but this tune reminds me of Lesbian Seagull in Beavis and Butthead! Worth the listen though, if only to hear Mo. Unfortunately, Maurice’s early leads tend to show him as weak lyrically. On the next two albums, Suddenly and My Thing also don’t do Mo justice. I’m not sure any song does. Maurice is at his best harmonizing and arranging and strengthening Barry and Robin. His accent sounds cool in this one though.

Where Daytime Girl was the sort of slow psychedelic. There is no mistaking the last three tracks. The Earnest Of Being George is the tenth track, but I swear I never hear the title uttered in the song. This is another one that seems to make no sense, but its irregular stops and starts are an unexpected bonus, in addition to the uniquely placed harmonies. The Change is Made is probably the best psychadelic on the album. The lyrics are almost understandable and the sound is excellent. Barry is on form. If I had to pick one word to describe this song its 'fresh’.

The album concludes with the title song. Horizontal is both psychedelic and mellow. Again the Bee Gees start and finish strong with this song, similar to World. The odd harmonies and irregular holds on notes are almost over the top, but it works. Several B sides and singles from this album, found on The Tales From The Brothers Gibb Cd, further show the branching out The brothers were experimenting with. Sir Geoffrey Saved The World, Barker of The UFO, and Sinking Ships are quirks, but the hit Words would go on to exemplify the broken hearted sound.

The album Horizontal is a pivotal step in The Bee Gees transition from Beatle imitators to the broken hearted song maestros we know today. Each 60s album, in my opinion tops the previous album. Without Horizontal, The Bee Gees would not have had the early and subsequent success that they did. I Love My 60s Bee Gees!

Posted by Kristin Battestella at 2:46 PM