My review of The Jacket doesn't appear to be archived at Neometropolis this year. This review was also in print with The Blue Lady magazine. But alas, I now present the complete review, with screen captures! A little dated, but a fine critique nonetheless. 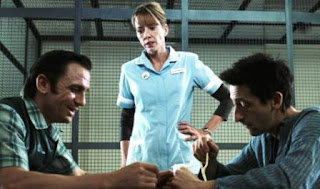 The Jacket Wraps Up Nicely

I don’t like Adrien Brody. His acting in forgettable films like Summer of Sam, The Thin Red Line, and the slightly better The Village are best left forgotten for the Oscar winner. (What’s with those bouncing Coke commercials he does?) As someone who freaks viewing The Diary of Anne Frank, I barely made it halfway through Brody’s Oscar turn in The Pianist.

I’m also not a super huge Keira Knightly fan. I like Bend it Like Beckham, and I really will watch King Arthur someday, but I loath any incarnation of Pride and Prejudice. I haven’t even seen Pirates of the Caribbean all the way through. For The Jacket, however, Knightly dons an American accent that is so bad, I thought it was a mechanical dub job.

Whew I’m glad I got that out of the way. Despite my misgivings on The Jacket’s stars, I liked the film. I saw the preview months ago at the theater, but the release came and went quietly. I was expecting more of the tie ‘em up cut ‘em up ala Saw, but this DVD was worth the money. 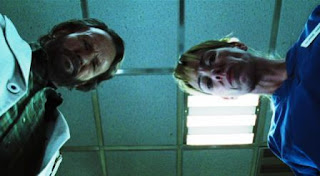 Adrien Brody plays Jack Starks, a Gulf War (that would be the first Gulf War for you youngins) veteran returning to after a gunshot to the head left him presumed dead. Starks helps a mother and daughter on the road, then hitches a ride with a seemingly stable fellow. After that, nothing is certain for Starks. He’s on trial for a cop’s murder, and the authorities say the mom and daughter don’t even exist beyond Starks’ warped mind. Jack is sent to Alpine Grove, where Dr. Becker (Kris Kristofferson) tries a new psychiatric technique-he puts Starks in a straight jacket and locks him in a morgue drawer. 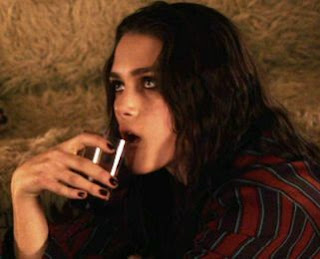 Sometimes a filmmaking team can ask too much of its audience, but when Jack apparently time travels from 1992 to 2007 while in the drawer, the audience is captivated and believing every minute. In the future Starks falls in love with Jackie Price (Knightly)- the grown up little girl he helped roadside. Together they try and find out what happened to Jack in 1992. Repeatedly Starks returns to the jacket and the drawer so he can leap forward in time. The future Drs. Becker and Lorenson eventually help Jack piece together the past events, but everything happens as predicted-including Jack’s own death. 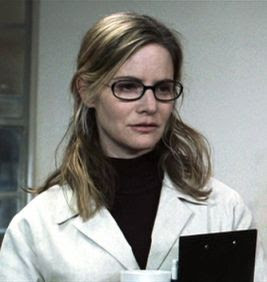 Jennifer Jason Leigh is perfect as Beth Lorenson. She strikes just the right blend between creepy and concerned doctor. Kristofferson is also delicious as the soft spoken Becker trying to do good with what amounts to just plain torture. Even future James Bond Daniel Craig plays resident crazy Rudy to a T. Once I got past the accent, Knightly was believable as potential turned junkie Jackie. She’s so spunky in her prior work, yet Knightly here portrays the perfect mix of honesty and innocence lost. Solid supporting roles from Kelly Lynch as Jackie’s mom and Mackenzie Phillips as a nurse at Alpine Grove further strengthen director John Maybury’s vision.

While it has all the makings of a horror movie, The Jacket keeps the suspense going by focusing on the human and emotional elements presented. Whether he is crazy, cop killer or not, we want Starks to find the truth. Instead of spooky action shots, Maybury smartly chooses tight, claustrophobic shots paralleling the ‘in the womb’ feeling Becker is trying to create with his therapy. 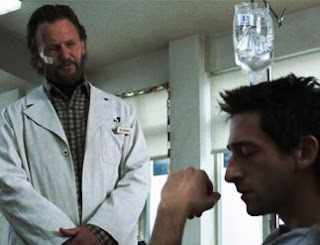 Based on a story by Tom Bleecker and Marco Rocco, the ending presented satisfyingly closes The Jacket. Enough What ifs are left for you to ponder-yet all that needs to be resolved is. Screenwriter Massy Tadjedin smartly make this film stay with you long after its viewed. The DVD includes a behind the scenes featurette with deleted scenes. Tadjedin and Maybury narrate several cut scenes and learning the genesis for a scene then why it was subsequently dropped is a nice treat. Another treat included in the features is three alternate endings. All are quality and believable as the final ending. Some are happy, some are sad, but all could have fit the bill. 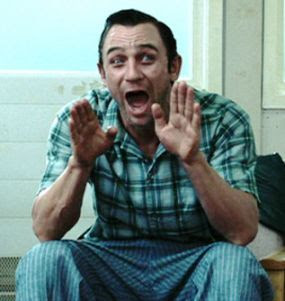 Maybury even explains his casting motivations and thanks producers George Clooney and Steven Soderbergh for their clout. With such big name backers, I’m surprised The Jacket came and went in theaters so quickly. The story is solid, direction is on form, and I even got a bit misty.

Although it was nominated for the 2006 Saturn Awards Best Science Fiction picture, The Jacket can be science fiction, horror, suspense or even just a twisted love story. It’s almost like a Gen X Somewhere in Time-and I mean that in a good way. The Jacket is an affordable and worthwhile DVD for your collection.

Posted by Kristin Battestella at 3:53 AM

Well gang, I updated this post in May 2008, so it's been over a year since the review was first published. I've since seen all the Pirates movies, and Kiera Knightly's alright, but too dang skinny now.

Of course I've also seen Craig's two Bond pictures now, and again I don't really think its his fault that I don't care for them. He is not without talent, as seen here.

In doing my rewatch for the screen captures I also noticed a lot more subtleties and symbolism than my first few viewings, so again I say The Jacket is a mindbender that should be watched and appreciated several times over.

But I still don't care for Adrien Brody!