To start off describing this album, can I tell you how much my heart skipped a beat when I found this record at a thrift shop? (Actually it turned out it was the empty sleeve, but anyway!) Perhaps more so the Bee Gees ‘lost album’ than their unreleased A Kick In The Head is Worth Eight In The Pants, It took me four months to download this shrouded rarity of an album. Released in 1981, Living Eyes was mostly dismissed by fans and critics. Everyone seemed tired of the Bee Gees music, and more interested their legal and personal matters. Living Eyes is a sweet poetic song, but the album’s title track barely made the charts. The release quickly faded away, and Living Eyes fell into the diamond in the rough category.

He’s A Liar is the second track on the album, but was mistakenly the first single. Perhaps the brothers went the opposite extreme in trying to change their sound. This one reminds me of the chase scene at the end of the original Terminator, and it has a big 2 in my play count column. Ahem. Moving on. Paradise should have been the single. This album is less on the Barry solo falsetto fest and more of the classic lyrics and harmonies that made the brothers. Barry and Robin sound excellent here. Again my marker, even my mom likes this one!

By golly if you don’t sing along to at least one part of Don’t Fall In Love With Me, you aren’t human. The first Robin track on the album has you hooked from its opening orchestral revving through Robin’s staple whail fest. The lyrics are excellent and Robin’s voice seems stronger than when we last heard it. This song should be called Paradox, because you can’t help falling in love with it. Soldiers is in the style of the brothers story type song, but it’s falsetto tone can seem at odds with its rough soldier lyrics. Still, it’s got a great interlude that I just love singing along to. On it’s own it’s a good song, but placing it after Don’t Fall In Love With Me, Soldiers can seem like a let down. Besides, not everybody can sing high enough to sing along to it ;0)

I Still Love You is another very strong outing by Robin. Sharing part of the lead with Maurice, some days I don’t know which hooks you more. I Still Love You or Don’t Fall In Love With Me? The lyrics and emotion this album are top notch, perhaps even higher than the latter stages of what became commercially driven ‘Fever’. Wait a minute? What is this? Is that Brother Mo I hear? It is, folks. Maurice’s Wildflower was his best song prior to Walking on Air, in my opinion. It’s easy country feel and sound are excellent. I’m running out of adjectives to describe this album!

Despite the renewed vigor of Robin and Maurice, Barry was not to be out done. Nothing Could Be Good should be right behind Guilty when people think of the Barry love song. It’s a bit of a nod to the old days, with a step up. Crying Everyday, however, is the jawdropper of the album for me. Robin turned on a dime from his Quaver self to 80s Dance King. Crying Everyday is a sign of the music that was to come, plus it has the ballad lyrics and harmonies we expect. The Bee Gees exceed one’s expectations this album. 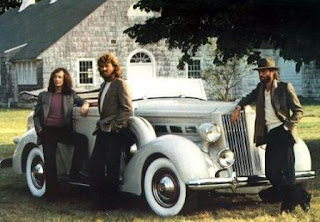 The final song on Living Eyes is Be Who You Are. Barry delivers and orchestral and vocal and lyrical and everything masterpiece. Masterpiece may be a good word to describe this album. Living Eyes represents each brother and each Gibb style, yet it is smooth and flows perfectly. Two years after Fever, the brothers showed their musical know how, and it still works today, perhaps better than ‘Fever’. A must in your collection. Not for its rarity but because its so damn good.

Posted by Kristin Battestella at 3:15 PM