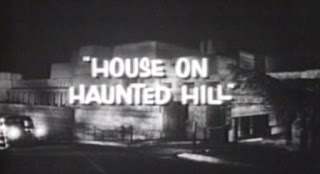 Ah, ‘Tis the season for horror movie marathons, is it not? On tap for my black and white movie challenged man, House on Haunted Hill- the 1959 original mind you. Even if its slightly dated and not as scary as it used to be, this classic is a must see for any horror buff.

Master of horror Vincent Price stars as Frederick Loren- a bored millionaire throwing a party for his young, jealous, and greedy wife Annabelle (Carol Omhart)- complete with a haunted house, plenty of scotch, and revolvers in mini coffins as favors. Five guests are invited by Loren-although none have met the mysterious millionaire. Lance, the test pilot (Richard Long), Ruth the reporter (Julie Mitchum), The Doctor (Alan Marshal), Nora a sweet girl of course (Carolyn Craig), and the drunk owner of the house Watson Pritchard (Elisah Cook Jr.). These financially challenged guests must spend the night locked in the haunted house-those who survive until morning will walk away with $10,000. 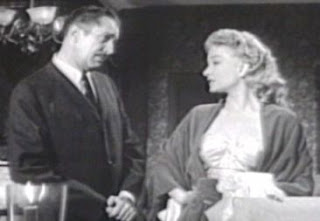 While that’s hardly a lot of money today, and other aspects of the film have not stood the test of time, Vincent Price is near perfection. The husky voiced veteran of such horror classics as House of Usher, The Raven, The Pit and The Pendulum, and my favorite The Masque of Red Death-not to mention mainstream roles in The Ten Commandments and Laura-Price proves his worth here. The multifaceted actor chews up Loren and thoroughly enjoys the cheeky interplay between Loren and his fourth wife. Their introductory scene is full of jealously, love of money, and reminiscing about poison.

The rest of the cast is standard in its support. Sure some of the drama and hysterics is over the top now, but each actor fits his or her part perfectly. Lance the bravado pilot and Nora can really scream-but more importantly, they serve their purpose. A classic star like Jimmy Stewart or Cary Grant-they come with a preconceived notion of who they are and what their character must be about. With a cast of relative unknowns, director William Castle succeeds in reaching his audience. The party guests are indeed regular people who need Loren’s money-desperate people to endure this house for money. Average Joes like you and me. Although it is firmly placed in its fifties mentality, Castle and writer Robb White touches a timeless concept with House on Haunted Hill-greed. What would you do for $10,000? 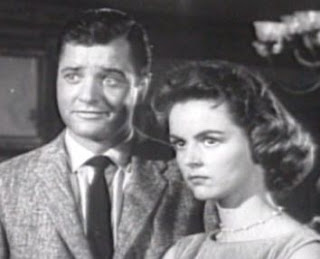 Unfortunately, Castle’s promotional ideas for House on Haunted Hill were touch and go. Although the low budget film succeeded at the box office, the idea of skeletons zooming across the theater at selected parts of the film was technically difficult and got out of hand with audiences. The film’s bloody heads, dangling bodies, pools of acid, and the like are also bound to the movie making techniques of the time. Observant fans will spot the flying wires and proverbial smoke and mirrors in the film. At the wrong volume, the music and screaming-and there is a lot of screaming-can be a toe towards annoying as well.

Hokeyness aside, House on Haunted Hill still provides one or two heart pounding jump in your seat scares. The first time I saw House on Haunted Hill, it wasn’t a dark and stormy night. The lights were on and it wasn’t even near Halloween. I tuned in for Vincent Price, but I thought the opening was convoluted and slow. When the first BOO moment came, I was caught totally off guard. I’ve been hooked on this little film that could since.

In 1999, House on Haunted Hill was updated by director William Malone with gore, gore, and more gore. Castle’s original is just silly enough and clean enough for a spooky night in with the kids. The remake focuses more on the actual haunting and back story of the house, but its gear toward modern fan boys with short attention spans is fleeting at best.The updated House on Haunted Hill stars Geoffrey Rush as amusement monger Stephen Price and Famke Janssen as his greedy wife Evelyn. As in the original, the woefully wealthy couple needs to add spice to their relationship by holding a party-a party in a haunted house of course. Five unsuspecting guests are lured to the fiesta, and whoever survives the entire night at the house receives a one million dollar voucher-just to keep it real for today’s audiences. Writer Dick Beebe added a psycho insane asylum back story to the house, but the plot does little. Chopped up parts, naked women, and crazy experiments try to explain the house’s evil, but in truly frightening fashions- not knowing the how or why is better. Knowing the rather weak source of your evil can make things a bit…lame.

Contrary to Malone’s belief, my favorite part of the revived House on Haunted Hill is not the opening herky jerky, cut ‘em up flashbacks, nor the subsequent roller coaster ride and stunt casting of singer Lisa Loeb and Spike alum James Marsters. My individual creepy came midway through the film, when Price views crazy psychiatrist ghost Dr. Vannacutt (Jeffery Combs) on his TV monitors. The otherworldly, stop motion, unnatural movements are the best part of the film, and they only last a few seconds. The shock value of chopped heads and good old fashioned shock therapy treatments do nothing to scare modern audiences.

Chris Kattan has a few memorable scenes as the neurotic owner of the industrial and contemporary haunt. He plays the exact same funny man as always, but it’s intriguing to see the humor in a spooky setup. Although I doubt all the humor is intentional. So if the movie isn’t meant to be funny, and it isn’t scary-who is the film for? It is rare for any medium today to not have a strict marketing campaign. Vincent Price fans will not like this new House on Haunted Hill, and teeny bopper fans will quickly dismiss it for others in this new inferior slasher genre- Thirteen Ghosts immediately comes to mind. When I tried to tell a friend about this new House on Haunted Hill, she responded, “The one with Catherine Zeta-Jones?” Of course that’s The Haunting-another remake inferior to the original.

What makes films like the original House on Haunted Hill classics is the effects-bad effects or simply the lack there of. My favorite part of Price’s version involves an old lady. I swear she is riding a skateboard to create that ghostly walk ambiance. It’s a catch-22. The effects are hokey and often as bad as hell-which of course tunes out spoiled CGI viewers. However, since old time film making effects were so bad-the story, actors, and directing needed to hold their own. The remake, however, adds nothing but bad gore and bad gimmicks. If a film must be remade, the redo must adhere to all the original’s strengths and them some. The new House on Haunted Hill is only for die hard cheese fans.

In a day and age where a film has to be rated R to be good, its amazing to recall that films like the original House on Haunted Hill succeeded with little violence, bad props, and cheeky dialogue. Kids might get genuinely spooked, and boomers might remember their first viewing at that special drive-in. House on Haunted Hill is what it is, but its old B flick fashion should not be taken at face value. Castle’s little movie is for fans young and old who appreciate good film. Clearly something was done right-we’re still watching over forty years later.

Fortunately both House on Haunted Hills aren’t over the top in price range. Check the bargain bin at your local video store for the new colorized version of the original, check the budget collections at any department store, or browse the used for a copy of the 1999 release. Hill can be found in classic sets, individually, as a double feature-even budget DVDs with cartoon shorts like the good old days. Priced at $9.99 or under-$5 or less if you know where to look-my edition contains a Superman short and the John Carradine classic Bluebeard. Two for the price of one!

Skip the remake and go with the classic House on Haunted Hill. It appeals to everyone, and you can’t call yourself a horror film buff without it!

Posted by Kristin Battestella at 3:42 AM

I like your article is fantastic, is really good written. Congratulation!!!. Do you want to see something more? Read it...Zeta Group, Great investment opportunity in Costa Rica: jaco bay. Visit us for more info at: http://www.zetaonline.com.